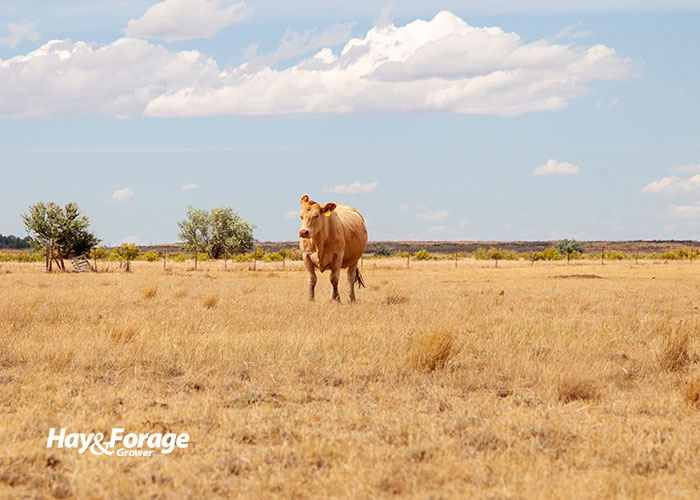 Extremely dry conditions across parts of the country are forcing many cattle producers to make tough culling decisions due to a lack of feed available for their herds. When developing criteria for culling cattle, many factors must be considered.

Before making culling decisions, Harty suggested taking inventory of available feed to assess where there may be a surplus or deficiency and evaluate how feed resources can be allocated. If there is a deficiency, consider either acquiring more feed or using the situation as an opportunity to cull some of the herd and focus on improving overall herd performance.

“In drought areas, both grazed and ungrazed forage is in short supply,” Harty said. “It is important to evaluate pastures to determine how much forage is available and how much has already been grazed.” Although it’s difficult in a drought year, avoid overgrazing pastures and continue to adhere to the grazing rule of “Take half, leave half.”

Hay crop inventories are also in short supply. In many areas, producers have a limited amount of grass hay to harvest, and finding hay to purchase may be a challenge. “With short supply comes elevated prices,” Harty reminded. “It is going to be important to plan ahead and acquire forages and feedstuffs early.”

She recommended testing all purchased feedstuffs in order to make the best, most cost-effective decisions for providing any needed supplements.

When developing criteria for making culling decisions, evaluate which cows or traits align with long-term goals for the operation. “If your operation hasn’t developed a mission and vision, take some time to think about what is important to you, your family, your operation, and the direction you are going with your herd,” Harty advised.

“Don’t make brash decisions that will drastically change the direction of your operation, but instead use this time as an opportunity to implement changes that you have maybe been slower to make previously,” she continued.

“In a drought situation when many people are culling cattle, prices are depressed as a result, so if you can pregnancy test early it will likely provide more opportunities for you to get a good economic return,” she explained.

2. Cull cows older than a specified age. Older cows are typically larger, so they usually consume more feed and may not maintain body condition score as well as younger cows. Older cows are also not typically the genetic leaders in the herd, so if a producer is focusing on moving their herd forward genetically, the older cows may be holding them back. “However, one thing to consider is older cows are adapted to the producer’s system and have likely already paid for themselves, so the pros and cons need to really be evaluated,” Harty reminded.

3. Sell replacement heifer calves rather than developing them. It costs a lot to develop heifers and they aren’t going to bring in any income for a period of time. However, they are the newest genetics in the herd, which deserves consideration.

4. Sell yearlings earlier than normal to stretch forage for cows. Yearlings are more liquid than cows and are a short-term asset typically sold within a short period of time. If cows are sold, there are potential tax implications or deferrals that need to be considered before more females can be purchased back to rebuild the herd.

5. Cull cattle based on factors such as disposition, thriftiness, and production. Look back through herd records to determine which cows have been performing the best and providing the most return.

6. Cull the bull battery. Due to their size, bulls require more feed than cows. Consider culling more bulls than normal when the breeding season is over and utilizing the forage they would use to maintain the cow herd. However, the bull battery will need to be purchased back again next year. If cows are being culled, there might not be a need for as many bulls.

Finally, Harty encouraged producers to write down the culling criteria they develop for future reference and add it to the operation’s drought plan.

These factors impact performance Next