The author is an extension agricultural economist with the University of Kentucky and a grass-finishing cattle farmer. 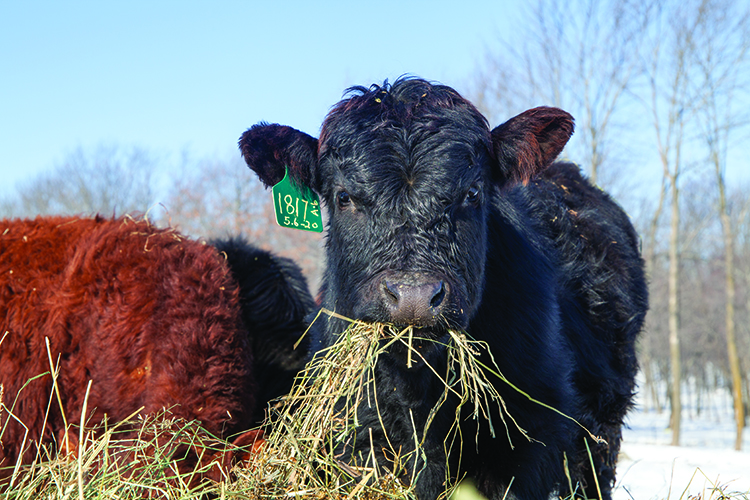 The optimum amount of time to feed hay is governed by hay cost, cow-calf profitability, and farm cost structure.

In the April/May 2021 issue of Hay & Forage Grower, I wrote an article titled “How hay became a four-letter word.” The basic message was that there is a trade off between hay feeding and stocking rate: Trying to reduce the amount of hay fed will require a reduction in stocking rate, assuming that management is held constant.

Reduced hay feeding will lower costs, but the corresponding decline in stocking rate will reduce revenues. Thus, we need to account for both factors to determine how much hay feeding will be most profitable. This article goes into the details of that trade-off and provides multiple scenarios that allow farms in the Fescue Belt to determine the most profitable hay-feeding period given their specific situation.

Three factors have the most impact on the most profitable hay-feeding period: net hay cost, general cow-calf profitability, and overall farm cost structure. Each will be discussed and accounted for in this analysis.

The effect of hay prices should be obvious. With high prices, the most profitable feeding period will shift lower, and with low hay prices, it will shift higher. The base hay cost also needs to be adjusted for the fertilizer value of feeding the hay, which will range from a low of $0 to $5 per ton with most conventional hay feeding practices, to as much as $20 to $25 per ton if feeding by unrolling hay or bale grazing. Subtract this fertilizer value from the gross hay cost to get net hay cost. For example, if the cost of your hay is estimated at $80 per ton, and the nutrient value of feeding this hay is estimated at $10 per ton, the net hay cost would be $70 per ton.

As discussed in the previous article, if high calf prices are expected into the foreseeable future, we would want to boost the stocking rate, and vice versa. High calf prices means high overall profitability, and reducing our hay feeding by lowering our stocking rate results in a severe loss on the revenue side. The loss of revenue would generally be greater than the cost savings from reduced hay feeding when base profitability is high.

When evaluating cow profitability relative to stocking rate, also consider costs that will change as additional cows are added or subtracted. A good example of a cost that should not be included is depreciation and interest on equipment and facilities. We could have 20 cows or 40 cows on a 100-acre farm, and these overall depreciation/interest costs do not change. Only those costs that change as we add or subtract cows will be considered.

The main costs that fall into this second category are feed costs (hay), mineral, vet/medicine, breeding, marketing, and cow depreciation/interest. Labor is an example of a cost that falls into both categories. If the number of cows on that same farm jumped from 20 to 40, our labor costs rise, but not double. See Table 1 for details of these costs used in the analysis. Hay cost per cow will change depending on the scenario and is also adjusted by an additional labor/machinery cost of $7.50 per ton for feeding compared to grazing for the same equivalent number of days.

The following analysis is applicable to the Fescue Belt, and adjustments need to be made outside of this region. These are discussed in the last section.

The analysis assumes a 100-acre farm that has all of its land in pasture and either has its hay ground at a separate location or buys its hay. The base stocking rate is 57 cows on this farm for a hay feeding period of 150 days (assumes good management). Two stocking rate scenarios are evaluated where hay-feeding days drop 30 days at a time:

1. Stocking rate gradually decreases down to 28.5 cows for zero hay feeding days (50% stocking rate compared to the base).

Two stocking rate scenarios are presented in Table 2 and Table 3 so that the user can choose which relative stocking rate decrease seems more realistic given their situation. 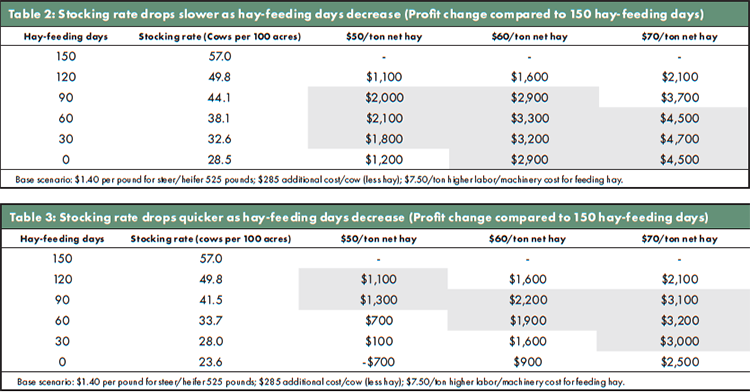 The average weighted steer/heifer price is $1.40 per pound for a 525-pound calf. Weaning weight and weaning rate change by the hay feeding period/stocking rate and gradually rise by 40 pounds and 3 percentage points respectively, going from 150 to zero hay-feeding days.

Tables 2 and 3 show the profit change for the various hay-feeding days compared to the base stocking rate for 150 hay-feeding days. Three net hay cost scenarios are presented: $50 per ton, $60 per ton, and $70 per ton, which represent the cost to produce or buy the hay, less any nutrient value the user derives from feeding the hay.

The hay feeding day levels where relative profitability is highest within a few hundred dollars are shaded in each table. As previously noted, two tables are presented so that you can choose which relative stocking rate is more appropriate based on your conditions. Use that table and then the net hay price that best represents your situation to determine what hay feeding period will be most profitable. If you are unsure which table is best, I would average the two tables. Summarizing the results for the most profitable hay-feeding days using the average of these two tables:

A few results are worth highlighting:

2. Reducing your stocking rate to reach zero hay-feeding days was

of the six scenarios.

Obviously, different farms will have different cost structures and different regions will have different prices for the same calves. For example, a calf in Missouri will likely sell for 10 cents more per pound than that same calf in Virginia, given their proximity to the major feedlots. You can modify the results in the table if your price outlook is different than the 525-pound steer or heifer average of $1.40 per pound. Make a rough adjustment of two weeks for each 10 cents per pound change in price. As an example, if the table says 90 days of hay feeding would be most profitable, and if your price outlook was $1.50 per pound, the optimal hay-feeding days would lengthen to roughly 105 days. If your price outlook was $1.30 per pound, then the optimal hay-feeding days shortens to about 75 days.

This same adjustment applies to differences from the $285 additional costs per cow used in this analysis (see Table 1). Make a rough adjustment of two weeks for each $45 change from this base cost. For example, if your costs are $45 higher than the estimated $285, shorten the number of hay-feeding days by roughly 15 days from what is recommended in the table.

Finally, if you make your own hay, do not include your fixed costs of production for the haymaking equipment since these costs will not change as you make less or more hay needed for a change in stocking rate. If you do not have good variable cost estimates, I currently recommend using $60 to $75 per ton.

Every region has its own unique dynamics related to growing season, forage growth curves, and the ability to stockpile forage for effective winter grazing. What works best in the Fescue Belt may not necessarily work best in other regions. For example, the most profitable hay-feeding period will be longer as you head north from this region, at least in the eastern U.S. In the western U.S., the results could likely go in both directions. In areas in the West with relatively low snowfall and where forages can stockpile well for winter grazing, optimal hay-feeding days would likely be lower.

In the previous article, it was noted that the 2006 to 2010 era had extremely low calf prices and that the most profitable hay feeding period would have been lower during that time. The same analysis was conducted for that time period by adjusting calf prices to 90 cents per pound for the 525-pound steer or heifer average and by adjusting the additional costs per cow downward to $225. The results: Depending on net hay cost, zero to 30 hay-feeding days was the most profitable strategy during that time frame, just as Jim Gerrish recommended in his 2010 book “Kick the hay habit.”

Having a high stocking rate and corresponding high hay-feeding period would have been very costly. For example, with a $60 per ton net cost, profitability would have been roughly $7,000 lower on the 100-acre farm at 150 hay-feeding days compared to 30 days.

A challenging year for forage seed production Next