It’s all about water in the San Joaquin Valley

Robinson and Kaffka are extension specialists in the Department of Animal Science and Department of Plant Science, respectively, at the University of California in Davis. 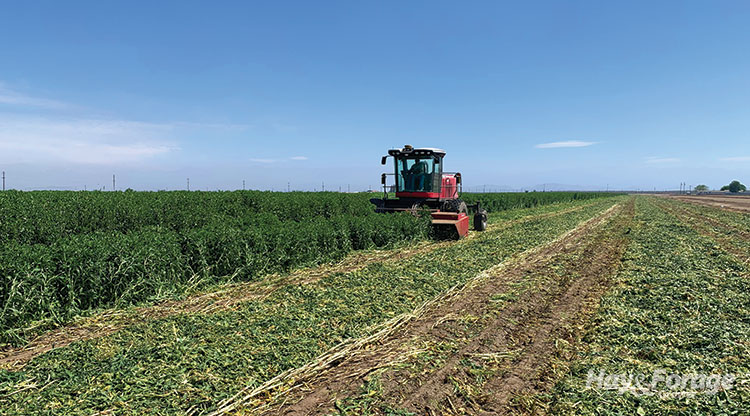 Dairy farming has accounted for a high proportion of farmland in the San Joaquin Valley (SJV) of California for almost 50 years. The SJV is a low rainfall area, traditionally ranging from about 5 inches annually in the south (Bakersfield area) to 20 inches in the north (Sacramento area). However recent weather/climate patterns have cut this already low annual rainfall by about 50%.

Starting in the 1930s, the state and federal governments and private irrigation districts created an impressive hydrologic infrastructure to move water from the wetter north to the drier south, including the SJV. This converted the SJV from a mainly single, winter, largely rain-fed cropping system to a double crop system by allowing use of fully irrigated summer crops. However, recent SJV rainfall patterns and higher water demands due to urbanization and the desire to enhance river flows have rendered this system untenable. Change is in the air — or rather, in the water.

What is the water problem?

Since about 1980, the general forage model for SJV dairy farms was to grow a cereal in the winter for ensiling in the spring, followed by corn or occasionally sorghum in the summer for ensiling in the fall. While many dairy farms grew alfalfa, mostly for hay, others bought hay from local and/or out-of-state sources. The water needs for this system, being far in excess of natural rainfall, were met by surface water deliveries from reservoirs in the Sierra Nevada and Cascade Mountains to the east and by pumping water from aquifers. With those sources severely restricted by rainfall (the reservoirs) and state regulations (aquifer access), SJV dairy farmers are looking for alternate forage models. And they are needed now.

The water problem facing SJV dairy farmers is actually twofold. Dairy farms with severely restricted access to surface water must find ways to reduce real water use while simultaneously dealing with state regulations that limit the amount of evapotranspired crop water use (ET water) allowed from their farmland. The objective is to restrict subsurface water pumping, which, in turn, will replenish aquifers. So, in a nutshell, dairy farmers need to plant crops that are water thrifty to reduce real water needs, as well as avoid full canopy crops from early June to late August to reduce ET water in order to meet state regulations.

How SJV dairy farms react to their water challenge will impact dairy farmers nationwide. Some SJV farmers will simply sell out — this has already begun — thereby reducing California milk production with collateral impacts on milk production needs and prices in other U.S. dairy areas. However, others are examining alternate crops and cropping systems. These new crop systems might have collateral impacts on feed demand from SJV farmers, which could lead to higher costs of many feeds, even nonforages.

A traditional option in times of SJV water shortages was to simply buy more hay —mainly alfalfa — out-of-state. While an effective short-term fix, this option has limited viability if practiced long-term since dairy farmers who go big on imported feeds to replace homegrown forages will face problems with state-regulated nutrient balances. Vacant or semi-vacant farmland absorbs fewer nutrients. But if this option occurs at scale, even for a few years, it will create a demand-fed hike in forage prices nationwide.

What are the options?

Another traditional SJV option during drought is to replace corn with sorghum, a crop that is somewhat more water thrifty — from about 62 to 57 gallons of applied irrigation water per pound of crop dry matter (DM), or only about 8% less. Disadvantages of sorghum are that it has a lower nutrient density than corn, and because it is grown during the same time of year as corn, it will have a full canopy during the high ET months of June through September.

It is likely that some dairy farmers will plant corn earlier in the spring or push back corn planting to late June or early July to reduce ET water losses by having only partial canopies during mid-summer. By doing so, lower applied water is needed during full canopy, which would now occur in the fall. However, this will require short-season corn hybrids to avoid a November harvest during short days, which also have the potential for rainfall events and foggy conditions. In addition, DM yields will be lower.

A traditional SJV crop, now on very thin ice, is alfalfa grown for hay in the SJV. Its applied water use in the SJV of about 102 gallons of applied irrigation water per pound of crop DM makes corn silage, at 62 gallons, look parsimonious. Loss of SJV-grown alfalfa hay will certainly result in dairy farmers looking east for replacement hays.

Winter cereals are traditionally harvested as a whole crop; however, in a water-limited world, some dairy farmers will be attracted to direct cutting winter cereal to create a high-head (high starch) forage for ensiling to create a replacement for corn silage in lactation rations. The residue of the crop could then be cut, field dried, and baled as straw. While this option would create two crops from winter cereal and an undesirable second harvest, the net water use per pound of harvested DM would only be slightly impacted.

We have been examining forage safflower as a potential dairy forage because it grows in a similar time period as winter cereal and, being deep rooted, requires much less applied water than winter cereal — 16 versus 39 gallons of applied irrigation water per pound of crop DM — almost a 60% reduction. However, based upon data collected at the University of California in Davis and cooperator dairy sites, its net energy value is about 20% less than winter cereal, making it a poor fit for diets of lactating dairy cows. However, it is a good fit for replacement heifers and can displace cereal silage, which can then be grown at lower acreages and/or used in lactation diets to replace some corn silage.

A nonforage winter crop that may further reduce needs for corn silage is sugar beets. A traditional SJV crop, albeit for sugar extraction, sugar beets can top 60 tons per acre as harvested, or about 11 to 14 tons of DM. As sugar beet DM is about two-thirds sugar (sucrose), beets preserved anaerobically in silage bags can replace some of the starch in corn silage, as well as in corn grain. Combined with its 35 gallons of applied irrigation water per pound of crop DM, versus 62 for corn silage, sugar beets have the potential to free up ET water to allow some corn silage to continue to be grown in high summer for high-group dairy cows, although it still seems inevitable that there will be more vacant farmland in the SJV summer than there has been in the past.

Growing forage safflower for ensiling during late fall through late spring as a forage for replacement heifers has the potential to reduce applied and ET water use when expressed per pound of diet DM. Addition of safflower to the replacement heifer diets would then displace most or all of the winter cereal that would be available for use in lactation rations, especially for post-peak cows. Combined with the equally water-thrifty beets, the cereal silage and beetlage, when added to the lactation rations, would displace some of the water-unthrifty corn silage and some imported (to California) corn grain. This would have the effect of reducing water needs per pound of lactation ration DM, as well as reduce the amount of land in crop during the high ET summer. Also, the manure absorbing capacity of the farmland would be balanced, at least to some extent, by less imported corn grain.

Dairy farmers in the SJV face unparalleled challenges if they wish to stay in business, especially if the coming years are characterized by lower than normal rainfall. While the crops and crop systems that are developed will differ among dairy farms, it is clear that continued reliance on the traditional winter cereal-summer corn silage system is highly uncertain. As these changes are happening now, the impacts of their adoption, and what exactly is adopted, will soon be felt nationwide.

Values for applied water use per pound dry matter harvested are specific to the San Joaquin Valley of California under lower than normal rainfall and are estimates. Other regions will differ.

This article appeared in the February 2022 issue of Hay & Forage Grower on pages 10 and 11.

Cocktail forage mixes may fit in dairy rations Next