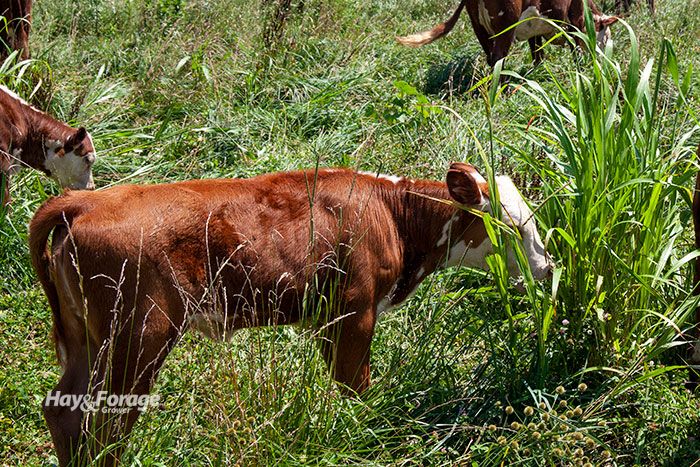 Polywire and metal gates aside, johnsongrass has farmers on the fence. On one hand, this warm-season perennial grass can be a high-quality feedstuff. On the other, johnsongrass is a competitive crop that can overwhelm forage stands.

In a webinar hosted by the University of Missouri Extension, Tim Schnakenberg outlined the good, the bad, and the ugly of the species. The field specialist in agronomy began by noting johnsongrass’ positive characteristics.

To utilize johnsongrass for grazing, turn livestock out to when plants are 12 to 18 inches tall and move animals when plant height is reduced to 6 to 8 inches. Interseeding cool-season grasses may extend the grazing season, and incorporating other crops like turnips, clovers, and small grains can benefit the system overall.

Johnsongrass can also be used for hay. Schnakenberg recommended harvesting at boot stage, or when plants are 40 inches tall — whichever comes first. He said johnsongrass can yield between 2 and 5 tons per acre.

Despite its merits, johnsongrass is considered a noxious weed in several states. Its aggressive reproductive patterns make it difficult to manage.

“The bad part of johnsongrass is that it reproduces from both seeds and rhizomes,” Schnakenberg said. “It’s a very prolific (seed) producer, and it’s taking light, nutrients, and water from other plants.”

One johnsongrass plant can produce between 30,000 and 80,000 seeds, which can be viable for up to 10 years. Rhizomes also develop within 19 days of seedling emergence, and a single plant can have up to 275 feet of these modified underground stems.

“You can mow johnsongrass and keep it in a vegetative stage, but if the timing of mowing is during a point where we’ve already reached seedhead production, and we’ve already got viable seed, we’re really not accomplishing much,” Schnakenberg said. “We could potentially move it from field-to-field on the mower deck,” he added.

Risk of prussic acid poisoning and nitrate toxicity are arguably johnsongrass’ worst attributes. The former is a concern for grazing livestock, especially in drought conditions and after a frost. The latter can also cause problems in pastures, but nitrate levels remain high when johnsongrass is harvested for hay, too.

To eliminate johnsongrass from a field, Schnakenberg suggested using a weed wiper or administering spot treatments with glyphosate. These options are relatively inexpensive but will take multiple passes through a field to be successful. Applying other herbicides that contain sulfosulfuron as the active ingredient may also be an effective approach, but carefully follow label instructions.

Pasture renovation may be justified in extreme cases of johnsongrass infestation. Schnakenberg encouraged producers to practice the spray-smother-spray method, although he cautioned that this strategy still may not eradicate johnsongrass entirely.