By Hay and Forage Grower
For the third straight month, the average price of alfalfa hay moved $1 per ton higher, according to USDA’s Agricultural Prices report. The positive movement sets yet another record-high monthly price. Typically, the average price of hay weakens in June as new crop hits the market along the Northern tier of states and inventories are bolstered.
The average price of alfalfa during June was $245 per ton, $46 per ton above a year ago. In most years, hay prices peak in either April or May (2021 being an exception).
The average price for Supreme and Premium alfalfa hay rose by $3 per ton in June to $277, which followed gains the previous six months. The Supreme and Premium price stood at $47 per ton higher than it was in June 2021. 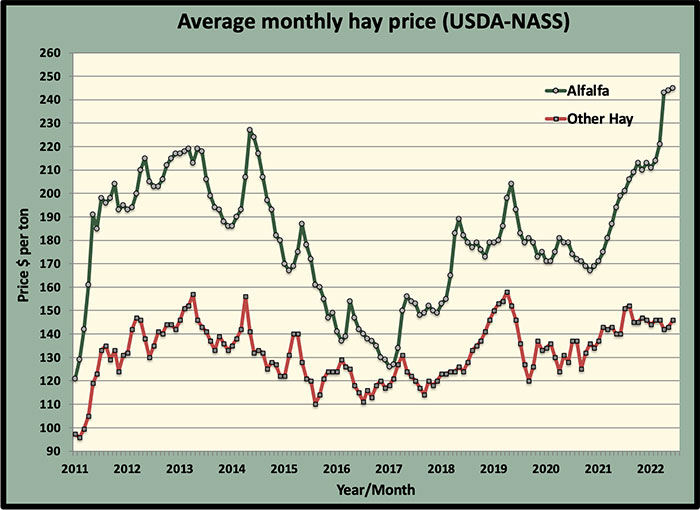 As was the case in May, eight states issued double-digit gains in their average alfalfa hay price. Washington led this group at plus $30 per ton. It was followed by New Mexico at plus $20 per ton and three $15 gainers in Oklahoma, Oregon, and Utah. Arizona, Idaho, and Nevada rounded out the group, each at $10 per ton higher.
Double-digit declines in alfalfa hay price during June occurred in five states. Iowa was down by $24 per ton and was followed by Wisconsin and North Dakota, both $18 per ton lower. South Dakota was down $15 per ton while Montana posted a $10 decline.
The highest average alfalfa hay price was reported in Arizona at $315 per ton. Washington checked in at $295 while Oregon recorded a $285 price.
Once again, the lowest 11 alfalfa average prices were all from Midwestern states. Wisconsin posted the lowest price at $150 per ton. It was followed by Iowa at $157.
Keep in mind that the USDA average prices account for all qualities and bale types of hay sold. Also, the final U.S. estimate is a volume-weighted average rather than a simple average of state values. Those states with the most volume sales will impact the final U.S. dollar value more than those states with fewer sales.
Supreme and Premium
The USDA also tracks the prices of Supreme and Premium quality alfalfa in the major dairy states and determines an average price from the five top milk-producing states (California, Idaho, New York, Texas, and Wisconsin). This data is used to determine feed prices in the Dairy Margin Coverage (DMC) program.
For June, the average price of Supreme and Premium alfalfa hay rose by $3 per ton to $277. One year ago, the average price of Supreme and Premium alfalfa hay was $230 per ton. 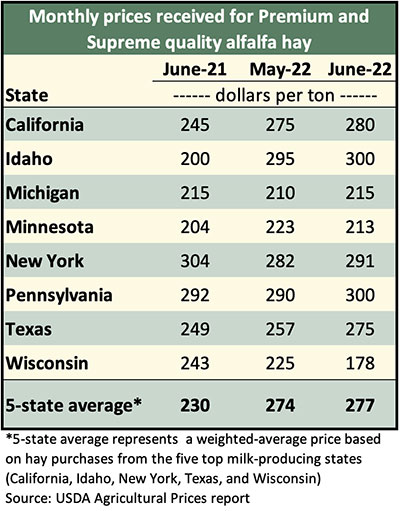 Other hay
The June average price of other hay (mostly grass) rose by $3 per ton to $146, which was $6 per ton above one year ago.
The highest prices for hay other than alfalfa were reported in Washington ($315 per ton) and Oregon ($275). Arizona and Colorado both posted a price of $230 per ton.
Oklahoma had the lowest reported other hay average price at $99 per ton. It was followed by Nebraska at $100 and North Dakota at $101. 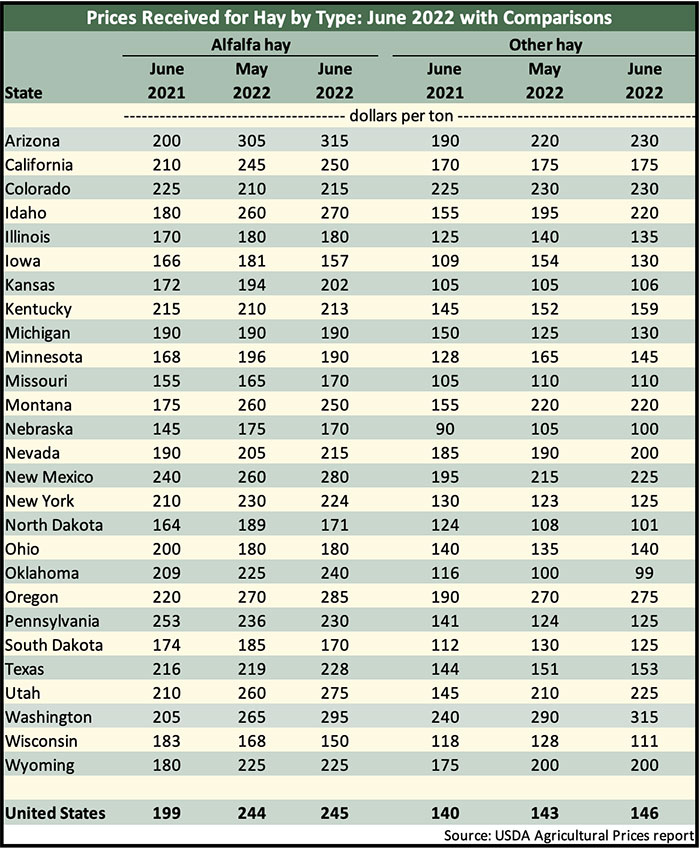