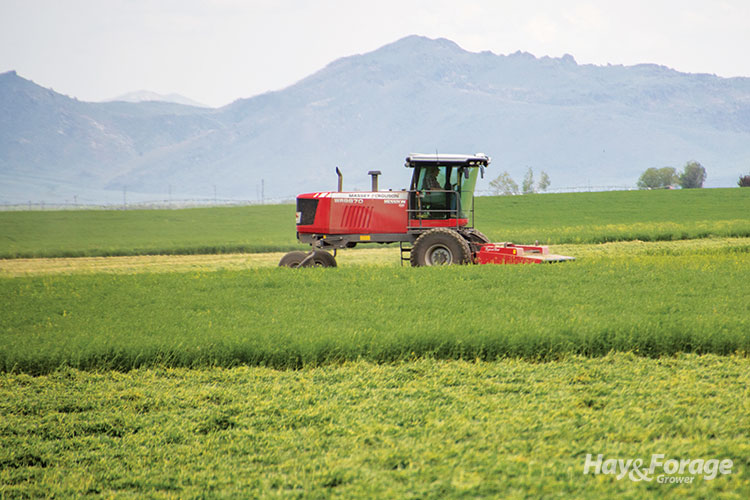 Forages are the main source of fiber in a ration. Nonfiber carbohydrates (NFC) include starch, soluble carbohydrates, and pectins, which are also found in citrus and beet pulp. Nonfiber carbohydrates are the readily available energy that – along with digestible protein – support digestion and microbial growth in the rumen. For a high-producing dairy cow, Penn State recommends an NFC concentration of between 32% and 38% of the ration’s dry matter.

Forages are usually described in terms of their “cell wall” concentration, which is the source of fiber, and their “cell contents,” which include the highly digestible fats, sugars, and proteins inside of living cells. In all forages, stems have a high proportion of thick-walled cells, so the more stemmy the hay, the greater the fiber concentration. Ration calculation programs provide values for the energy, protein, and other nutritive value characteristics of ration components, and the characteristics of alfalfa hay change with the growth stage at which hay is harvested.

USDA defines the quality of alfalfa hay, from Supreme to Utility, in terms of its protein, neutral detergent fiber (NDF), acid detergent fiber (ADF), total digestible nutrients (TDN; in this case, based on ADF), and relative feed value (RFV). As alfalfa matures, the proportion of stem increases relative to the proportion of leaves, so fiber concentrations go up and proteins and other readily digestible components go down. The rigidity that keeps stems upright is due to lignin, and more lignin slows the digestion of fiber, so the proportion of ADF (the strongly lignified fiber) rises with maturity.

In a study of beef cattle finished either in the feedlot or on irrigated pastures near Logan, Utah, that was published in 2016, the NFC concentrations of the diets were compared, and the NFC of the monoculture perennial legume pasture used in the study (birdsfoot trefoil) was 40% while the NFC of the feedlot ration was 43%, which was a surprising result. Nonfiber carbohydrate concentration is not usually reported for forages, but research studies carried out in California, Korea, and Serbia (all located at relatively low altitudes) have reported NFC concentrations of 25% for alfalfa hay. After testing alfalfa grown at numerous locations in Utah at elevations greater than 4,000 feet, we found that the NFC of alfalfa hay, also a perennial legume, is routinely close to 40%.

Elevation is not likely to have a direct influence on the NFC concentration of forages, but other elements of the climate of the Mountain West are. These include such factors as a dry atmosphere that results in little growing season cloud cover, warm temperatures and intense solar radiation during the day that promote photosynthesis, and cool nights (commonly near 60°F) that minimize respiration and therefore the loss of carbohydrates. The end result is the maximal accumulation of NFC. 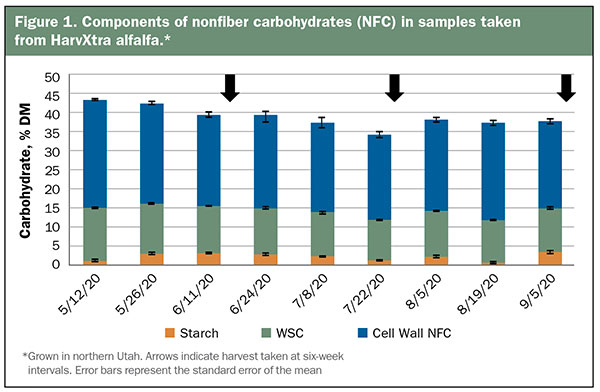 The NFC concentration declines with maturation and is lower at the second harvest than at the first and third harvests, but on every date, it was between about 35% and 45% of the dry matter.

Elevation made a difference

A series of studies of irrigated alfalfa were carried out at three elevations in Oregon – Madras at 2,440 feet, Powell Butte at 3,200 feet, and Fort Rock at 4,300 feet. Annual precipitation at these locations is between 10 and 12 inches per year, and growing season temperatures at these locations are also similar: mid-summer daytime highs are between 80°F and 90°F and nighttime lows are between 50°F and 60°F. The mean alfalfa NFC concentrations at these locations were 31%, 32%, and 37%, respectively (see Table 1). Temperatures are similar at these locations, but a factor that differs and could increase NFC concentrations with greater altitude is solar radiation. Unlike common pasture grasses that hit a maximum rate of photosynthesis as sunlight intensifies, the rate of alfalfa photosynthesis increases with higher solar radiation. Mid-summer total daily solar radiation at Madras, Ore., is 7.4 kilowatt-hours (kWh), while at Lewiston, Utah, it’s 8.4 kWh.

On the other hand, a different story existed for pectin, which is sometimes referred to as the intercellular “cement” of the plant. The expected concentration for pectin in alfalfa is 15%, but it appears to be approximately 25% in high-altitude Mountain West alfalfa. As a reference, citrus pulp contains 10% to 40% pectin and beet pulp contains 15% to 32% pectin.

Studies where citrus pulp was substituted for grain as a source of NFC demonstrated that pectin fermentation slows as the rumen pH decreases, but the fermentation of starch or sucrose does not, lowering rumen pH further. Another difference is that higher pectin diets result in measurably greater milkfat production while starch generates more rumen protein.

The factors that favor photosynthesis — high solar radiation, long sunny days, and cool nights — can boost the concentration of NFC in alfalfa from the northern Mountain West. Other perennial legumes, including birdsfoot trefoil, sainfoin, and cicer milkvetch, also accumulate NFC similar to or greater than alfalfa.

More high-NFC/low-NDF alfalfa hay could be included in dairy diets as long as NFC and NDF values are known and factored into the ration. Since NFC is calculated from factors measured by near-infrared spectroscopy (NIRS), Western alfalfa hay growers can determine NFC concentrations as a part of their hay tests. Relative forage quality (RFQ), a newer index of hay quality based on digestibility, more accurately predicts milk production from alfalfa hay compared to RFV. It is based, in part, on NFC, and the RFQ of the two high-elevation alfalfa hays have far higher RFQ values than the lower elevation hays (Table 1).

Where alfalfa is grown impacts forage quality. From our studies, alfalfa produced at higher elevations, all other factors being equal, offers dairy producers a unique feed with outstanding milk production potential and economic benefits.

This article appeared in the August/September 2022 issue of Hay & Forage Grower on pages 22-24.

Is the risk of fall alfalfa cutting overrated? Next

Mixing it up on alfalfa-grass mixtures Previous