Custom harvesting is a family affair

The author served as the 2021 and 2022 Hay and Forage Grower summer editorial intern. She currently attends Iowa State University where she is majoring in agricultural communications and agronomy. 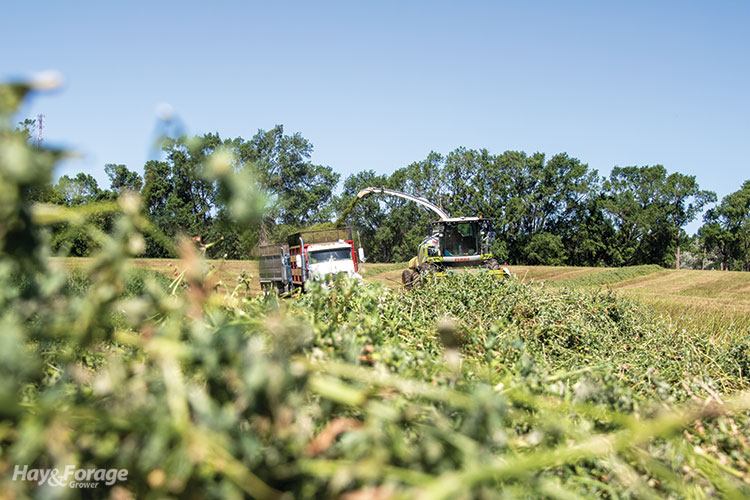 There is only a short distance between Pipestone, Minn., and the South Dakota border. This five-minute drive from the city limit sign to the state line is flat and wide with farmland stretching toward the horizon on either side of the road. Homesteads are spread out like volunteer corn in a soybean field, and neighbors are separated by at least a quarter mile. However, there is a cluster of houses on the route that are much closer together, and they belong to Bernie, Dan, and Brian Uilk, co-owners of Uilk Custom Chopping.

The homes make up three points of a triangle on the property that Bernie grew up on. He milked cows alongside his father and eventually raised his sons Dan, Brian, and Kevin, a seed salesman who also lives nearby, to become dairymen themselves. The brothers remember doing chores before school every morning, and Dan and Brian returned to the farm after going to college. Dan moved in right next door to Bernie and Brian settled directly across the road. For years, the trio took care of their 150-cow herd, but when profits faded in the early 2000s, so did their passion for dairy farming.

In 2005, the Uilks decided they wanted to do something different — they just didn’t know what that something was. They applied for a buy-out program to sell the cows in August, and by December, their cattle were gone. The parlor was empty; the barns were quiet; and their three-row, pull-type chopper was parked in the shop. But this piece of equipment didn’t sit idle for long.

As other small dairies near the I-29 corridor dissolved, the men sat back and watched larger operations be built. They anticipated the new farms would need custom forage harvesters, and thus, Uilk Custom Chopping LLC was born. They traded in their pull-type chopper for a Claas Jaguar 900 and started taking on clients one at a time. Then, word of their business spread. 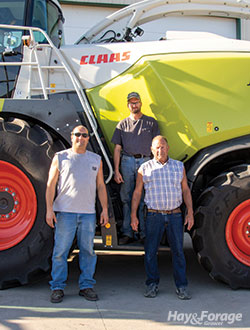 Bernie Uilk (right) along with his sons Dan (left) and Brian (center) are former dairy farmers who transitioned to a successful custom forage harvesting business.
The Uilks now have over 30 customers within a 50-mile radius, encompassing farms in southwest Minnesota and southeast South Dakota, occasionally dipping into northwest Iowa. They hire nearly 45 part-time workers, have two full-time employees, and seek additional help from neighbors, friends, and family. The Uilks’ wives and an admirable aunt make and deliver meals to the team when they are in the field, and Dan and Brian’s children are eager to buckle into the buddy seat to keep their dads and grandfather company whenever they can. Their proximity on a map contributes to a cohesive business, but their trust in one another has been the real key to their surge in scale.

The Uilks chop about 1,500 acres of alfalfa over four cuttings and between 10,000 to 12,000 acres of corn silage every year. They also make some earlage for farmers upon request.

Alfalfa and corn aren’t the only crops the Uilks are willing to harvest. “We chop about anything,” Dan stated. “We do some ryegrass in the spring and oats and barely in the summer. We chopped thousands of acres of sorghum, millet, turnips, and radishes in 2019 when people couldn’t get their corn and soybeans in because it was so wet.”

Since purchasing their initial Claas Jaguar 900 chopper, the Uilks have upgraded their machinery lineup. They currently run four Claas Jaguar 980s and two 990s. They also have three Oxbo mergers and recently acquired a Claas triple mower to start custom mowing for the first time in 2022. The Uilks own six pack tractors and 26 of their own hauling trucks, but they hire several other trucks during the height of corn silage harvesting as well. “We started out with one chopper, and now we have six . . . started with a few trucks, and now we have too many,” Bernie chuckled.

While Dan and Brian prefer chopping to any other task, Bernie spends most of his time in the cab of the 12-foot JBS Track-Pack silage bagger. The Uilks bag haylage and silage for regular full-service jobs, but they are also recruited for custom bagging outside their typical geographical range. The bagger is unique in that it glides on tracks instead of tires to prevent damage to wet soil and reduce compaction. Luckily for Bernie, the tracks allow for a smoother ride, too.

“I do all the bagging,” Bernie boasted. “We get out a little farther with it — probably about 100 miles or so — making bags for people who have their own choppers.”

Investing in the bagger was a no-brainer, and the same can be said for every other piece of the equipment in the Uilks’ shed. They take pride in staying ahead of advances in technology. Although features like field mapping, auto guidance, and moisture sensing in their newest choppers came at an extra cost, the men agree these improvements have enhanced their efficiency.

When harvest is in full swing, the crew divides up and chops at multiple locations a day. They start their engines early in the morning and keep them revved until after the sun goes down. With machines burning the midnight oil, maintenance becomes an around-the-clock job. The Uilks do as much work on their equipment as they can, but sometimes they must call in an extra set of hands.

“We’ve had something go wrong at 11 p.m., but it’s got to be going again by the morning,” Bernie said. “Thankfully, our equipment dealer provides great service, and they have guys who will come out and fix choppers until 3 a.m. so they’ll be ready to go by 7 a.m.”

Another way they mitigate risky situations is by assigning at least one chopper to stay at home while others are being used. This way, there is always a backup if one of the other choppers breaks down. The brothers also take advantage of their time in the off season to assess every machine and make repairs as needed.

Upkeep has been particularly problematic lately as many parts have become extremely expensive, and supply chain issues have made them even harder to find. Pair that with the price of fuel, and the ability to stay profitable has been more strained. The Uilks charge by the hour for haylage, by the ton for corn silage, and by the acre for earlage, but in order to stay profitable, all of their rates have went up in the past year. Despite this, most of their customers have been understanding and receptive.

Another challenge the Uilks face is coordinating chopping jobs. With such a large cohort of part-time help, they must be diligent in communicating with their employees. Brian admitted it can be difficult to organize who goes where, and sometimes information gets lost in translation. “You can have all the equipment in the world, but if you don’t have anybody show up to run it, it isn’t going to run itself,” he said.

Of course, for the first few weeks last spring, the Uilks’ equipment didn’t run at all. Wet weather delayed most of the work on their schedule, which caused a bottleneck in production when skies finally cleared. Compared to years prior, they had a much smaller window of time to chop the same number of acres — if not more. Nonetheless, the Uilks persevered, and after some long days and late nights, they finished chopping the first cutting of alfalfa for all of their clients by mid-June.

Their last job of the 2022 first hay cutting was at a farm outside Sioux Falls, S.D. Brian began moving equipment there before dawn, while Bernie made some adjustments to the bagger back in Pipestone. By mid-morning, several employees had reported for duty and started driving straight trucks down the road in a single file line. 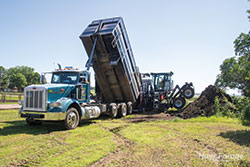 The Uilks provide bagging for full-service customers and also do custom bagging jobs for farms with their own forage harvesters.
Within minutes of arriving onsite, everyone fell into the rhythm of chopping, hauling, and bagging. Brian navigated the hayfield in the chopper, picking up the alfalfa that had been windrowed a few days earlier. As the straight truck next to him filled up and drove off, another one seamlessly took its place, barely causing a hiccup in the harvesting pace. The fresh haylage was hauled back to the farmstead where Bernie was directing trucks to the mouth of the bagger. They backed up, unloaded, and were back to the hayfield as quickly as they’d come.

Before this assembly was underway, Bernie and the farmer from Sioux Falls had an affable exchange. He was one of the Uilk’s first customers when they established their custom chopping crew, and the lighthearted moment offered a glimpse into their values and gratitude for their customers.

“We like long-term relationships,” Dan stated. “Most of our clients are repeat customers, and we try to make the best feed for them so they keep coming back. Our business has evolved as they have evolved. We’ve grown as they’ve grown.”

The Uilks prioritize working for their original clients. They meet with farmers to walk through fields before harvest to assess forage moisture and determine chopping schedules, and they speak with dairy nutritionists to ensure they meet each operation’s individual needs. The Uilks also follow up with customers in the winter to discuss what went well and how they can improve in the coming year.

This commitment to excellence was instilled in Bernie, Dan, and Brian when they were dairy farmers. Custom chopping requires the same skills, effort, and flexibility as raising cattle. Time and labor are just allocated differently. With that said, the Uilks don’t plan on scaling up anytime soon. They are content with their current level of business and aim to remain steadfast in the quality of their service. Above all, they are grateful for the willingness and support from everyone on their team.

This article appeared in the November 2022 issue of Hay & Forage Grower on pages 6-8.

This grazing dairy is a work of Hart Previous