This grazing dairy is a work of Hart

The author served as the 2021 and 2022 Hay and Forage Grower summer editorial intern. She currently attends Iowa State University where she is majoring in agricultural communications and agronomy. 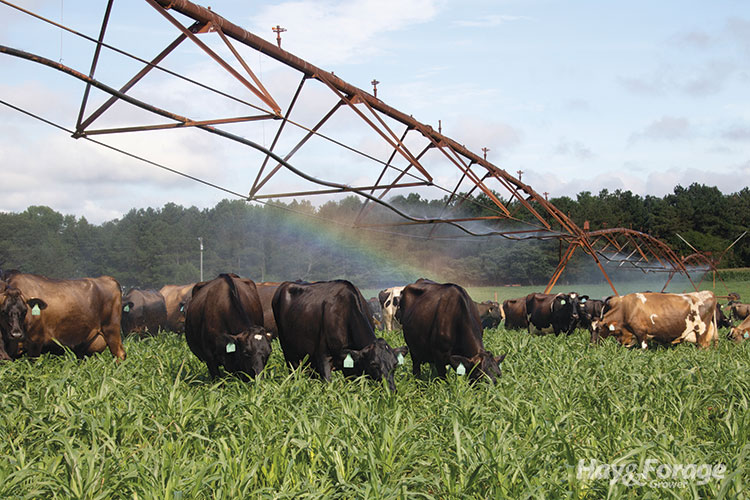 Waynesboro, Ga., is the bird dog capital of the world. It is home to the Georgia Field Trials, an annual competition where hounds hunt down flocks of quail. To commemorate this event, the town has many businesses named for the canine companion and is speckled with murals of English Setters and German Shorthaired Pointers. A silhouette of a bird dog is even painted on the city’s water tower.

While the term “bird dog” is typically used as a noun to describe a pet that has been trained to retrieve winged game, it can also be used as a verb. To bird dog means to pursue something with relentless determination. An example of this is how Richard Watson became the founding farmer of Hart Dairy just a few miles east of Waynesboro. 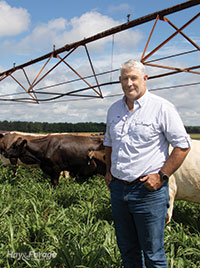 Richard Watson explained, “As the annual ryegrass and small grains slowly start to die out, we start putting millet in. So, by the time the winter annuals are gone, millet is ready to graze.”
Watson grew up in New Zealand where most of the animal agriculture is pasture-based. After earning a doctorate in animal science and grazing techniques, he came to the U.S. as a postdoctoral research assistant in a plant breeding lab at the University of Georgia, and later served as the forage extension specialist for Mississippi State University. Then, in 2007, Watson decided to raise livestock himself.

The self-appointed dairyman envisioned an operation where cattle could graze 365 days a year — much like they do Down Under. However, he knew from his work in research and extension that he would need to establish a comprehensive crop rotation plan to ensure constant forage growth in the hot, humid climate of the southeastern U.S. To do this, Watson would have to start from scratch.

He bought a farm that was previously used to grow corn and soybeans with fine sandy loam soils that were virtually depleted of nutrients and organic matter. Then, he began seeding acres of the idle cropland to Tifton 85 bermudagrass and experimenting with different cool- and warm-season annuals to figure out how to bolster feed supplies year-round.

Over time, Watson pieced together his puzzle of a grazing plan and eventually developed a dynamic forage system that became the foundation for Hart Dairy. Today, the operation comprises about 2,000 acres across three farms and has the capacity to milk nearly 2,500 cows. Watson takes pride in the fact that his cattle graze fresh grass every day, yet he has little desire to market his products as 100% grass-fed. Instead, he is committed to a more holistic approach.

“We put the cows first,” the expert grazier said. “We don’t push ‘100% grass-fed’ because I don’t believe cattle should be fed nothing but grass. I think they need to be supplemented when grass doesn’t meet the nutritional needs of a dairy cow by itself.”

To guarantee cows have access to grass every day, different areas of Hart Dairy are dedicated to growing different forages. Bermudagrass pastures make up roughly 30% of the land, and cattle rotate through these fields on the shoulders of winter and summer grazing seasons. These pastures are also harvested for dry hay once or twice a year.

The rest of the land is used for annual crop production. Cool-season species such as wheat, oats, and annual ryegrass are seeded in the fall. Then in the spring, these acres are transitioned to pearl millet, as well as some sudangrass, crabgrass, and sorghums.

“There is a period in the year when these species overlap,” Watson explained. “We don’t have a set planting date; we have multiple planting dates. As the annual ryegrass and small grains slowly start to die out, we start putting millet in. So, by the time the winter annuals are gone, millet is ready to graze.”

This process commences sometime in late April and is complete by mid-June. Millet is seeded at a rate of 15 to 20 pounds per acre with a no-till drill to avoid disturbing the light soil. And to mitigate excessive drainage and encourage better plant growth, each field is irrigated with a center pivot.

Because of the pattern formed by the center pivots, pastures are circular and divided into 10- to 15-acre paddocks that are shaped like slices of pie. The fences that divide the paddocks are spring-loaded so the pivots can drive over top of them to get from one wedge to the next. A sprinkler system has also been installed along the pivots to cool cattle, and each paddock has two water troughs that are fed by an underground well.

With ample irrigation water and suitable growing conditions in the summer, sufficient crop yields are rarely a concern. Millet usually offers adequate energy levels as well, even for lactating cattle. Protein, on the other hand, becomes a limiting factor in terms of nutrition.

“Once the millet gets going, it very rapidly becomes a forage surplus,” Watson said. “We have plenty of grass, but as we near the end of the season, crude protein levels start to drop off. At that time, we supplement with canola oil or soybean meal.”

Excess millet is also harvested for baleage, but Watson has recently given this strategy a second thought. Rather than risk improper storage and gamble with baleage quality, he has been planting less millet and growing more corn silage in its place — between 500 to 800 acres in total each year. Although this means Watson must implement more intensive grazing to maximize forage utilization, it appears to be a more effective use of his land base.

“Using resources to grow a lot of millet just to turn around and make baleage makes less sense nutritionally and agronomically than using that same land to grow corn silage,” Watson stated. “Yes, corn is a little hungrier on the nitrogen, but it’s much easier to manage from a feeding standpoint.”

Corn silage is fed to cows when pastures are phased back into wheat, oats, and annual ryegrass in the fall. This practice, as well as feeding dry bermudagrass hay, helps animals take in enough energy to maintain body condition and milk production when they start consuming cool-season species again. Overall, balancing the nutrients cows get from grazing with additional sources of protein and energy makes a difference consumers can taste.

“Our milk has better components,” Watson said. “It is high in butterfat and high in protein. And because our cows still graze grass every day, it is high in beta carotene.”

The cows at Hart Dairy are Holstein-Jersey crosses and their genetics come from New Zealand. They have high milk components and conception rates, and average between five and six lactations.
While forage quality is key, the genetics at Hart Dairy contribute to milk quality, too. The cattle are Holstein-Jersey crosses, which is a common approach in New Zealand. Even though the animals have lower milk production rates compared to more conventional dairy breeds, their small frames and low maintenance requirements make them more energy efficient. What’s more is the cows’ conception rates are around 90%, and they average between five and six lactations.

“It’s not uncommon for us to have 10-year-old cows still out in the pastures, producing milk, and having a calf every year,” Watson said. “Our cull rate is under 15% because there is no reason to get rid of them. They are doing a great job.”

Animals are bred using A.I., and Hart Dairy raises its own replacement heifers. Even though it is common for grazing dairies to follow a seasonal breeding schedule, this herd is divided in two groups: cows that calve in late winter or early spring, and cows that calve in the fall. This allows for more consistent milk production throughout the year.

Two of the Hart Dairy farms have a 48-side swing parlor, whereas the third farm has a 60-cow rotary. No matter the location, cows are milked twice a day. Some of it is shipped to Dairy Farmers of America, but the operation brands a growing percentage of its own milk as well. Whole milk, 2% milk, and chocolate milk with the Hart Dairy label can be found in stores like Ingles, Publix, and Walmart in the Southeast. 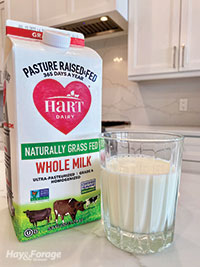 Hart Dairy currently brands a growing percentage of its own milk, which can be found in stores throughout the Southeast. Products include whole milk, 2% milk, and chocolate milk.
The idea for the brand came to Watson when low commodity prices were threatening the dairy’s profitability. At first, it was challenging to find middle ground between local farms and large cooperatives, but Hart Dairy has since claimed a spot on this spectrum. Communicating the company’s values has been key to the brand’s success.

“It’s important for consumers to be invited onto the farm — not necessarily physically, but philosophically,” he opined. “It’s all about traceability. We let people know what we do and why we do it. We are open and there is nothing to hide.”

Looking ahead, Watson plans on building a processing plant so the dairy can market all of its milk. The company also intends to expand its product line to include butter, half-and-half, and even infant formula.

To achieve these aspirations, Hart Dairy must uphold its level of milk production, which ultimately depends on forage production. The current crop rotation has proven to be a viable solution to grazing cattle year-round, but there is one species that has yet to be integrated on the farms that Watson thinks could be instrumental to the operation.

“Something I’m interested in is growing alfalfa — interseeded into bermudagrass and as a standalone forage,” he said. “A lot of people think you can’t grow alfalfa in Georgia, but there are some non-dormant, dual-purpose varieties that do well in our environment.”

Watson plans on planting approximately 100 acres of alfalfa this fall to be grazed and harvested for baleage and dry hay. He is hopeful the legume’s elevated crude protein will offset the cost of supplementation and that its ability to fix nitrogen in the soil will reduce the amount of fertilizer needed in mixed stands.

Watson has a history of trial and error when it comes to growing forage, and this endeavor will be no exception. With that said, the company would not be where it is today without his relentless determination in creating a robust system. Grazing cattle like a Kiwi in eastern Georgia has proven to be an agronomic feat, but perhaps there is no better location for Hart Dairy than right next to the bird dog capital of the world.

This article appeared in the August/September 2022 issue of Hay & Forage Grower on pages 6-8.

Custom harvesting is a family affair Next

Alfalfa kept him on the family farm Previous