Alfalfa kept him on the family farm 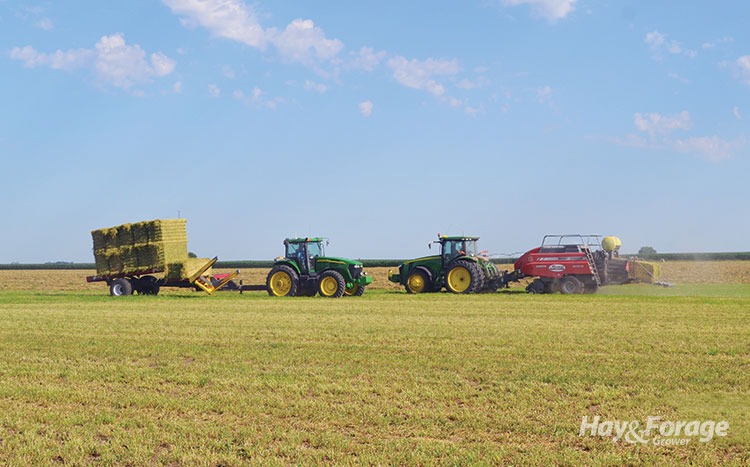 Brian Mumm seeded down more than his usual number of alfalfa acres this year. He didn’t need to because he also raises 3,800 acres of high-value row crops with his father, Paul. They farm just south of the small, rural town of Geneva, Neb., which has at least been indulged an exit ramp off U.S. Highway 81.

This is prime southeastern Nebraska corn and soybean country — just far enough north to still have distinct seasons and just far enough south to allow for a long growing season between frosts.

Regarding the additional alfalfa seedings in 2022, Mumm said, “I think hay prices are going to stay strong longer than corn is going to stay at $7 per bushel. The hay industry is what got us to where we are today, so we’re not going to shy away from it.”

A recent Nebraska tourism campaign proudly states, “Honestly, it’s not for everyone.” The same could certainly be said for the business of commercial haymaking, but Mumm has no regrets about his lot in life as a haymaker in the Cornhusker State. After a few minutes of talking to him, it’s easy to discern that he loves the hay business. The congenial hay producer is still young by most farmer age standards — old enough to have a wealth of practical experience but young enough to help anchor the commercial hay industry for at least the next couple of decades. 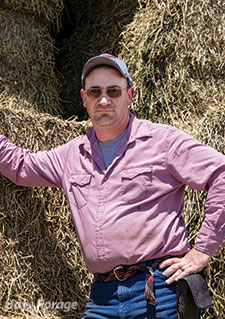 Brian Mumm is bullish on alfalfa, seeding down more than his usual number of acres in 2022.
In addition to row crops, Mumm harvests 600 acres of alfalfa and 200 acres of native and cool-season grasses into large square or round bales. He also makes about 2,000 small square bales that he sells at a local hay auction and has about 90 cow-calf pairs that graze summer pastures and winter cornstalks. Mumm’s wife, Heather, does the farm bookkeeping, and they have three children: Mackenzie (16 years), Addison (10), and Colton (9). The farm also has two full-time employees.

Mumm’s father didn’t have an operation of his own until 1982, when he began renting the current home farm, which he eventually purchased. At that time, it was row crops and cattle with a little alfalfa grown for the cow herd. The hay enterprise expanded in 2000, a year after Mumm graduated from high school.

“Row crop prices were in the dumpster,” he recalls. “I determined that alfalfa was going to be my ticket to stay on the family farm. About this same time, there was a custom hay baler in the area who was ready to retire, and I assumed his customer base along with expanding alfalfa acres on our farm. We continued to do custom hay baling up until 2022,” he added.

“In the past five years, our hay markets have really changed,” Mumm said about his current clientele base. “For a long time, we were shipping a lot of our hay to Texas dairies. Then that shifted to Indiana and Wisconsin dairies. It seemed our environment was different back then — we were able to get a lot more dairy hay in the barns than we have been recently.”

In the past five years, Mumm’s demand for dairy hay has waned. He also noted that his remaining dairy customers were asking for a bit lower quality and lower-priced hay — somewhere in the range of 145 to 160 relative forage quality (RFQ). Meanwhile, the number of feedlot and cow-calf customers has grown in recent years, and most of these operations are close by.

Currently, Mumm said that 80% of his production is sold within 50 miles of the farm, which allows him to do his own trucking. Mumm’s biggest customer is a 2,200-ewe sheep producer who buys both grass and alfalfa hay. Almost all of his customers are repeat clients from year-to-year.

“Many of our beef customers are mostly interested in nice, leafy green hay,” Mumm said. “They’re really not interested in a forage test. So, we’re now able to let the hay mature a little longer, realize a higher yield, but still try to retain leaves and get it up green. We’ve moved from five or six cuttings per year to four and sometimes five cuttings.”

About 70% of Mumm’s alfalfa acres are pivot irrigated and produce an average yield of 7.5 to 8 tons per acre. The remaining fields are dryland, which average 4 to 5 tons per acre. Not surprisingly, a dry year can really cut into his production on the dryland acres.

Alfalfa is seeded during both the spring and late summer, depending on the year. “We sometimes put in a short-season soybean crop and hope to get it off early enough to still seed alfalfa in a timely manner,” Mumm explained. “It doesn’t work every year, so then we have to seed the next spring.”

Roundup Ready alfalfa varieties are drilled at 20 pounds per acre, including the 9% seed coating, and without a companion crop. He has tried

HarvXtra-traited varieties but doesn’t think he can realize a benefit given his current beef producer customer base who don’t demand extremely high-quality hay.

Mumm gets four to five years from his stands. “We’re pretty aggressive on our stands. If they’re not full-production stands, we rotate them out,” he said. “We can get pretty high row-crop yields here, so if I don’t have top hay yields, it goes back to corn.”

Hayfields are cut with 16-foot Massey Ferguson 9980 mower-conditioner. Swaths are dropped into an 8-foot width, which is the maximum the conditioner allows. Darf wheel rakes are used to merge two swaths together and raking occurs in the morning of the day the hay will be baled, just as the dew is starting to burn off. Mumm bales with either a Massey Ferguson 3x4 square baler or two John Deere round balers. About 50% of the production is put into round bales.

Mumm also has a Stinger in-line bale wrapper. He explained, “Often, in July and August, the humidity is high and it’s difficult to get hay dry enough to bale. In such cases, we will wrap the 3x4 bales about three days after cutting when they are 20% to 25% moisture.”

Often referred to as “sweet hay,” Mumm said that they wrap to ensure oxygen is excluded and then haul it out during the winter when the temperature is cold enough to prevent any rapid heating and molding. His customers know to begin feeding this hay right away.

About 1,000 wrapped bales are made each year. “We actually have a few customers who request the wrapped hay,” Mumm said of the end product that is neither baleage nor dry hay. “In fact, we feed our own cow-calf pairs with the wrapped hay in springtime.”

Spring alfalfa weevils are Mumm’s toughest annual insect challenge. “It’s never a question of if we’re going to spray for them, but when,” he said. “Maybe one out of five years we’ll also have to spray the stubble after first cutting. Potato leafhopper issues are sporadic from year-to-year,” the haymaker added.

To maintain high yields, Mumm has his soils grid sampled before fields go into alfalfa. Variable rate fertilizer applications are made based off the grid sampling results. Phosphorus, potassium, sulfur, and boron dry fertilizers are applied during March as a convenience to his custom applicator. The farm’s native soil pH is 5.6 to 6.1, according to Mumm, so lime is needed on a routine basis and is applied the winter before the alfalfa is seeded.

Mumm is a farmer who thoroughly enjoys the hay business, even with its inherent challenges, and finds pleasure when interacting with those of a like mind. That’s why he and his father have been long-time members of the Nebraska Alfalfa Marketing Association (NAMA), which assists its members in the promotion and marketing of their forages. The organization also provides various educational events pertaining to alfalfa production and marketing methods.

Mumm has served several terms on NAMA’s board of directors, including a multi-year stint as president. In 2019, he was awarded the association’s “Producer of the Year” award.

Mumm, like a lot of hay producers, considers his biggest hay-producing challenge to be the weather. “My answer has changed over the years. At one time, I would have said marketing, but it’s been pretty easy to sell hay in recent years,” he chuckled.

Challenges aside, it’s clear that Mumm enjoys what he does. In looking to the future, the Nebraskan reflected and said, “I just hope one of my kids loves the hay business as much as I do.”

This article appeared in the August/September 2022 issue of Hay & Forage Grower on pages 18-19.

This grazing dairy is a work of Hart Next