Worming their way to better hay 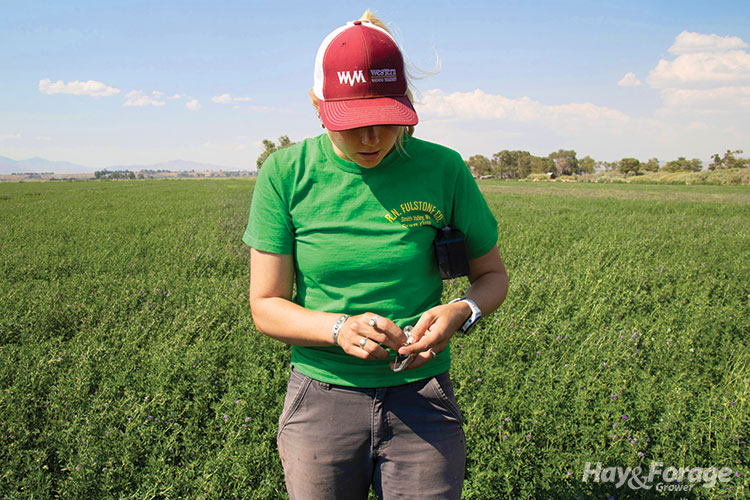 Emily Fulstone uses a Brix refractometer to evaluate plant sugar concentrations on one of the ranch’s alfalfa fields.

In the heart of Smith Valley, Nev., lies the small, conveniently named community of Smith. Blink, and you’d miss it. What you’d open your eyes to see, though, are hayfields reaching well beyond the outskirts of town. Many of these fields are farmed by R.N. Fulstone Company, a commercial operation with high-quality hay and a high-quality reputation.

The Fulstone family traces its history in Nevada back to 1856. Leather workers turned farmers, they have resided in the foothills of the Sierra Nevada Mountains ever since. Today, the family farms more than 4,000 acres, producing small and large square bales of hay for customers in central California. While haymaking in this part of the country is not uncommon, the Fulstones’ approach to regenerative agriculture is.

Emily Fulstone is the seventh generation to work on the farm. She majored in environmental science and biology at the University of Oregon, gaining newfound knowledge and a passion for change. With the implementation of her management practices, R.N. Fulstone Company has seen elevated nutrient values in their hay. They have also witnessed drastic improvements to their growing environment.

After studying ecosystems in college, Emily returned home to apply what she learned to the family’s farming operation. She scrutinized their fields and realized they had become dependent on high fertilizer rates. Then she conducted her own research to understand why.

“Plants put 40% of the sugars they create through photosynthesis into exudates, which are sugars those plants inject into the soil to feed bacteria,” Emily explained. “In return, the bacteria will break down nutrients and make them available to plants as needed. It’s a symbiotic relationship.”

Emily wanted to reduce her family’s dependence on fertilizers and pesticides and build populations of beneficial bacteria in the soil. To do this, she had to get her hands dirty.

“One of the best ways to produce bacteria is through worms,” she said. “Red wriggler worms have a specific gut system that kill the bad bacteria that cause diseases in plants and propagate the good bacteria that transport nutrients to them.” 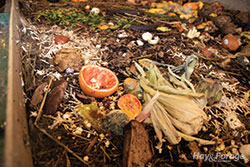 A compost table serves as a means to raise worms. There are about 1,000 worms per pound of compost.
Emily began raising worms in 2016, using a flow-through compost table and feeding them wood chips, shredded newspapers, and table scraps. There are about 1,000 worms per pound of compost, and she has grown the population to roughly 120 to 150 pounds of worms. Sounds of squirming through the material can be heard just standing near the compost, and a mass of the crawling creatures is quickly revealed upon lifting a banana peel or potato skin from the top of the pile.

Worm excrements are collected so bacteria can be extracted from them. These castings are brewed in a large tank with an aerator. In a matter of 24 hours, the number of bacteria from the castings goes from 10,000 to 5 million colony forming units (cfu) per milliliter of water.

The liquid that is produced in the aerator is referred to as “worm tea” and is sprayed on the Fulstones’ crops. “The greatest benefit of putting this on the soil is that it exploits the symbiotic relationship in which plants work with bacteria,” Emily concluded. “Farming can be really great for the environment if we do it in a way that utilizes ecosystems as a whole.”

Worm castings are “brewed” in an aeration tank. The number of bacteria in the worm tea grows exponentially.
To further enhance the environment, the Fulstones have started using fertilizers that are bioavailable and transported through the bacteria in the soil. This allows the nutrients to be more accessible to plants and reduces the amount of needed purchased fertilizer. What’s more is they haven’t needed to spray pesticides for the past five years.

“With the lack of pesticides, predatory species such as ladybugs and green lacewings have been in abundance,” Emily said. “What little pest pressure we have is now controlled by these predatory bugs instead of relying on pesticides.”

These efforts have also improved the quality of the Fulstones’ hay. “Using worm tea and bioavailable fertilizers, we have found our total digestible nutrients (TDN) and relative feed value (RFV) are quite a bit higher,” Emily said. “Our hay’s TDN has tested about four points higher on average for the last several years, which is huge.”

Emily noted that her father, Steven Fulstone, president of R.N. Fulstone Company, is a big supporter of her regenerative agriculture approach. “I am so grateful I have a dad who is more than willing to try something if I can show that it will work,” she expressed.

About 60% of the Fulstone Ranch is used to grow alfalfa, most of which is marketed in central California. The ranch also custom harvests an additional 1,500 acres of hay for neighbors.
Approximately 60% of the Fulstones’ land is used to grow alfalfa, which is usually seeded in the fall at a robust rate of 28 pounds per acre. The Fulstones cut hay four times a year with 35 to 40 days between cuttings. They will leave hay in windrows for four days, and on the fifth morning, it is baled between 4 and 9 a.m. to take advantage of any dew the early hours have to offer.

First and fourth cuttings tend to have higher levels of TDN and crude protein (CP) and are primarily sold to dairy producers. This hay is made into large square bales. In between these harvests, the Fulstones make small square bales with second and third cutting hay for horse owners and retail stores.

Carl Weatherford is the farm’s manager, and he has been working for the Fulstones since he was young. There are five other full-time employees, and 10 to 12 seasonal workers are hired each year during haymaking season.

Aside from alfalfa, the Fulstones have pastures of orchardgrass and a high alpine meadow grass mix, which they also cut for hay. Although grass hay is popular among the company’s customers, Weatherford said it doesn’t generate as good of a return as alfalfa. “We’ve got quite a bit of grass hay – and it’s high-dollar – but grass takes more water and fertilizer,” Weatherford stated. “We sell it at a higher price, but when you pencil it out, our dollar per acre return is lower.”

Since the majority of the company’s customers are from central California, Weatherford analyzes the hay’s test results and prices the product according to the Golden State’s market. When buyers make a purchase, they are responsible for their own trucking and hauling.

Water is a concern for any kind of crop, and all of the Fulstones’ acres are irrigated. Nearly 80% of their fields use flood irrigation, but they utilize pivots and wheel lines as well. The operation has water rights that allow them to access water out of the West Walker River. This river flows out of Topaz Lake, which is a reservoir for water from the Sierra Nevada Mountain’s snowpack. The Fulstones also have rights to supplemental well water, which are used in drought years like 2021. 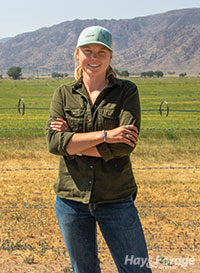 Emily Fulstone is a strong believer in regenerative crop production. She welcomes the opportunity of becoming the next generation to assume the leadership role at her family’s ranch.
The Fulstones not only make hay on their fields, but they also do custom forage harvesting on 1,500 acres of their neighbors’ fields. The company manages all of their customers’ irrigation, and some of them choose to have the Fulstones market their hay, too. Emily also works with a few of these farmers to develop environmentally friendly production plans.

“In the spring, I will get soil samples, look at plant health, and do an overview of each field,” she explained. “Then, I give the producers a recommendation of how I think best to treat their field for the growing season.”

Advocating for regenerative agriculture has set other farms up for success. Two farmers who Emily has consulted for have adopted practices similar to the Fulstones’. They have reported significantly higher yields and a reduction in pest pressure, and Emily hopes more farmers in their valley follow suit.

Yet another enterprise that Emily oversees is the operation’s certified all-natural beef herd of Angus-Hereford crossbred cows. It consists of nearly 1,000 mother cows and 200 replacement heifers. These animals are fed low-quality hay and silage from grain crops in rotation when they call the Fulstones’ feedlots home in the fall. For most of the year, though, the cattle reside on rangeland.

Calving season begins in February and lasts through April when branding begins. Then, in early May, these animals are shipped to the Bodie Hills of California to graze permitted land the Fulstones own.

Cattle graze higher areas of elevation as vegetation grows. Emily and other cowboys will guide the animals that fall behind the herd on horseback, although most of them move forward on their own. “The permit starts at 7,200 feet and the top is about 10,500 feet,” Emily said. “When the grass up high grows, we make sure those cattle take themselves to the upper portion.”

In October, calves are weaned and shipped back to the farm. They will stay there until December or January when they are sold. Many of these calves are purchased by operations in California, but the Fulstones also have buyers in Colorado and Nebraska.

In the meantime, cows are relocated to different permits closer to Smith that open at the beginning of November. They begin grazing at the furthest distance north of town and are slowly driven south. Eventually the herd makes it back to the Fulstones’ farm by mid-February, and the cycle starts over again.

Despite the illusion of repetition, Emily said one of her favorite parts of farming is that she can never be quite sure what to expect from one day to the next. She is currently the only Fulstone of her generation interested in agriculture and has already begun her succession of presiding over R.N. Fulstone Company. Under Emily’s leadership, the farm will continue to strive toward regenerative production, and she feels fortunate to have the opportunity to put her ideas into action.

This article appeared in the April/May 2022 issue of Hay & Forage Grower on pages 6 to 8.

Alfalfa kept him on the family farm Next