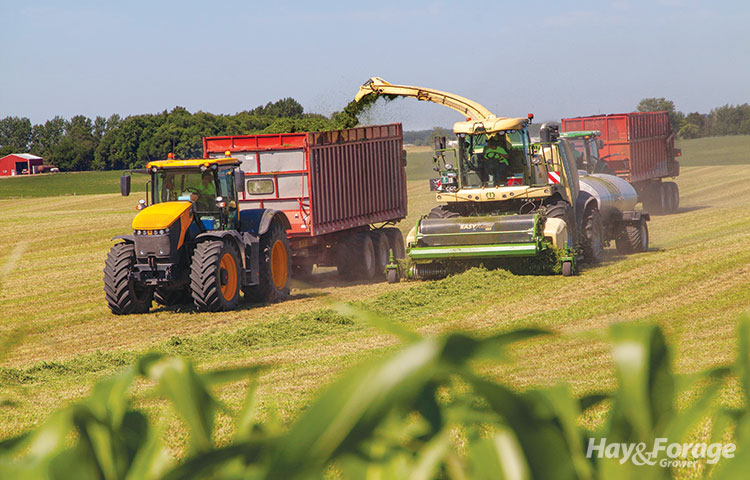 Every farm has a story.

Like most stories, farms also have chapters. These chapters may be defined by one planting season, a production year, or perhaps a generation of ownership. Todd Malecha, president of Malecha Enterprises in Villard, Minn., and his wife, Louise, have been writing their chapter since 1989, and they are now inking the final pages. But their family’s farm story won’t end when they put down their pens.

The management team at Malecha Enterprises are pictured from left to right: Katelynn Malecha (daughter), Rebecca Orr (daughter), William (son) and Emily (daughter-in-law) Malecha, Todd and Louise Malecha (parents and owners), Jonathan Malecha (son), and Robert Malecha (son).
Todd and Louise are looking forward to passing down ownership of Malecha Enterprises to five of their seven children: William, Jonathan, Rebecca, Katelynn, and Robert. Their children are already involved on the farm, but now they are ready to write their own accounts. Although each of them oversees different parts of the operation, they all seem to be on the same page.

Malecha Enterprises is home to approximately 1,300 dairy cows and is surrounded by about 2,700 acres used to grow all of the herd’s feed. The Malechas also custom harvest forage, bale wheat straw, pump and spread manure, and own an aggregate quarry.

To ensure that each of these enterprises continued to grow during a time of change, Todd and Louise began working with a succession planning consultant. Rena Striegel, owner of Transition Point Business Advisors, started helping the Malechas six years ago. She is impressed with how the family members value the future of their farm and push each other to expand and improve the many businesses that make up Malecha Enterprises.

The first thing Striegel prompted the Malechas to do at their initial session together was define a vision and outline where they would like the farm to be in 10 years. Then the family began making more timely goals, considering what they wanted to achieve in three years, and then more specifically, in just one year.

The Malecha children determined leadership roles among themselves — each of them claiming the part of the operation they were most passionate about. The family also defined roles for the other approximately 40 full-time and seasonal employees working at the farm, creating their own handbook and a comprehensive accountability chart.

“The accountability chart tracks how employees are being allocated throughout the operation,” Striegel said. “It shows all of the workers, the jobs they have, and who they answer to. The Malechas have done a great job at developing that.”

Next, the Malechas set expectations for themselves as managers, as well as for current and future employees of the operation. They comprised a list of values everyone is expected to demonstrate. These include being responsible and trustworthy, having candor and integrity, and a commitment to never-ending improvement.

“This is where it all begins for us — it all begins with the values of who we are,” Todd said. “That way we know who we can work with. You need to possess at least three of these to become an employee.”

Taking on different roles and setting goals was an important part of the farm’s succession plan. Striegel believes these initial steps helped the Malechas structure their individual businesses and gain confidence when it came to overseeing them.

“Their leadership team has become more cohesive, and they have become more competent as leaders,” Striegel said. “I’ve seen their businesses go from being fairly small and modest to being robust and high-producing divisions of their operation.”

Even though a change of hands is fast approaching, the Malechas are not slowing down when it comes to enhancing production. Those in management positions meet weekly — every Monday at 6:15 a.m. — to monitor and discuss measurable aspects of the operation. This allows them to identify what is going well and what could use improvement.

The Malechas keep track of their measurables by filling out a scorecard. They record data such as pounds of milk produced, number of acres chopped, and number of bales baled. Scores are based on expectations the Malechas have for themselves, and if a score is less than ideal, they must figure out why.

When an aspect of production scored low because of human error, family members trace issues back to the source and hold each other accountable. “Just because they are family doesn’t mean they can get away with being less than what they’re capable of,” Striegel stated. “The Malechas do a great job of supporting each other, but they are also quick to note when someone is not quite hitting the mark on performance.”

Confronting a family member can be challenging, especially on a farm when problems can occur frequently. Striegel attributes the Malechas professionalism as the reason for their early start to succession planning. With her guidance, they have been able to develop a communication style that fits their needs and lends itself to their success.

“They have used resources — people such as myself — to help diffuse frustration and make sure their conversations are being held in a low-emotional, highly intelligent manner,” Striegel said. “They don’t want to hurt each other, but rather are working to improve each other as a team.”

Communication is important to keeping everyone connected. Each day, the Malechas work in different buildings, on different fields, and even in different states from one another. As manager of the Malecha’s custom forage harvesting business, William finds himself in a remote location often.

William and his employees cut and chop hay and corn silage, either bagging or piling the product for their customers. Much of their work is done on farms in Minnesota and North Dakota, but they also travel to South Dakota, Colorado, and Montana.

In addition to their custom work, the Malechas’ machinery is used to harvest forage and grain on their own farm. William establishes new alfalfa stands in the spring at a rate of 20 pounds of seed per acre and plants 75 pounds of oats and peas per acre to add forage yield during the initial year and compete against weeds. They have also started planting HarvXtra-traited varieties.

“This spring was our third year planting HarvXtra, and the goal is to have the entire farm be seeded with it at some point,” William said. “But we haven’t sprayed the alfalfa yet because we haven’t needed to. The oats and peas are keeping the weeds under control,” he added.

Alfalfa is cut every 28 days, but planting HarvXtra gives this harvest schedule a little leeway. William was interested in seeding HarvXtra for its higher nutritional values, which he said doesn’t decline as quickly as conventional varieties if harvest is delayed. When it is cut, alfalfa is chopped and bagged.

About 60% of the dairy ration is comprised of forage, and the Malechas also plant brown midrib (BMR) corn to harvest as silage. “In order to have the cows right, you have to have the forage right,” Todd asserted. “Forage — that’s what makes the milk.”

Grain corn is also included in the cows’ feed ration, as well as soybeans which are roasted on-site. The Malechas reduce costs by not having to haul their crop to be made into soybean meal.

The roaster also has another purpose. “We roast our own soybeans, and we dry manure solids for bedding,” William said. “The roaster kills all the bacteria, brings the moisture down an additional 10% to 15%, and then we put it back in the freestalls as bedding.”

Everyone has a role

Jonathan is another important character to Malecha Enterprises’ story. He oversees the operation’s aggregate quarry, which yields sand, gravel, and rock products. Jonathan also runs the custom manure pumping and spreading enterprise, and in his spare time he oversees projects in the farm’s shop.

Rebecca cares for the dairy’s calves and works in concert with the herd manager, Ben Wuebkers. Wuebkers is not a part of the family, but he is valued as if he were. He delegates daily chores, keeps track of milk production, and monitors animal health. Louise oversees the dairy as a whole and leads human resources for the farm.

To advertise their custom work and dairy, the Malechas have created a website and social media accounts. Todd’s youngest daughter, Katelynn, and William’s wife, Emily, have teamed up to promote the family’s operation online and provide engaging content. Emily also assists with bookkeeping and finances in the office.

Robert, the youngest Malecha, helps on the farm during the summer and when his college schedule allows. After graduating, he plans on returning to farm full time.

Todd and Louise still own Malecha Enterprises and assist with every aspect of the business, but their involvement is becoming less and less. “If I wasn’t here, our farm would operate just fine,” Todd said confidently. “We have gotten to the point where we are not really needed.”

This is exactly where he and his family want to be. Striegel considers the Malechas a model family because of how well they have executed their succession plan. But the process doesn’t stop there. Todd and Louise’s offspring are already looking ahead to welcome the next generation to the farm.

“I know the Malechas are already thinking about what it will look like when the cousins start working together, and I anticipate our relationship is one that will go on to the next generation,” Striegel predicted. “They are committed to not only running a profitable business but making sure their family dynamic remains healthy as well.”

It is not always easy to transition a family farm to the next generation, but the Malechas have created a business model that will sustain their farm into the future. It is clear that this story is nowhere near finished.

This article appeared in the March 2022 issue of Hay & Forage Grower on pages 6-8.

Worming their way to better hay Next