By John Szczepanski
The author is the director of the U.S. Forage Export Council.

A strong U.S. dollar and increased competition are two factors that have led to a more difficult hay export situation.
Looking back over 2015, forage exporters reflected on a year of frustration and challenge, as well as moderate success. The trade data reflects a small rebound from a tough 2014 but tells only part of the story. After years of strong and steady growth, exports of hay and straw dropped nearly 20 percent in 2014. The factors contributing to that decline lingered in 2015, with farmers and exporters alike facing a new status quo that’s forcing new strategies and approaches.

The strong U.S. dollar, increased competition from other countries, and global dairy farmers finding alternatives to imported forage reflect a new reality. Adding to these challenges was the West Coast port crisis, which led to a further reduction in the last quarter of 2014 and into the months of 2015. During this time, forage exporters had a very difficult time making on-time shipments, forcing end-users in various export markets to seek alternatives, whether imports from other countries or domestic feed.

Exports in January and February were down 25 percent from 2014, improving only in the following months (up 18 percent, March through May) as importers and dairy farms restocked empty warehouses. Beginning in June, exports subsided to levels lower than 2014 (15 percent lower from June through August), due largely to too much product being shipped the previous months. With apologies to Clint Eastwood fans, we refer to 2015 as “The Ugly, The Good and The Bad.” The latest figures suggest that 2015 will represent about a 7 percent improvement over 2014, with every percentage point hard fought.

It is expected that Japan and South Korea will import less forage in the future. The Transpacific Partnership (TPP) will encourage more imports of dairy and beef products, putting stress on inefficient, small-sized dairies (both South Korea and Japan average about 50 head per farm).

Aging populations will also play a factor: In 1980, 28 percent of all Japanese farmers were aged 65 or older; by 2010, that portion had risen to 74 percent. As farms shut their doors or consolidate, feeding styles will change as farmers attempt to find more cost-efficient ways to feed their cattle. Another factor is foreign government policies that are aggressively encouraging farms to convert from food to feed, providing subsidies for both the growing of forage as well as to their purchase by dairies.

Exports to the United Arab Emirates declined significantly from 2013 to 2014, and year-on-year exports through September 2015 reflected another decrease of 77 percent. The drop in exports was initially attributed to inventory rebalances, suggesting a short-term situation. More fundamentally, this reflects a price-sensitive market responding to a stronger dollar by seeking cheaper feed sources with new farming ventures in Africa, South America and even investment in some farmland in the western U.S. These developments have tempered original expectations for the Middle East market, and remind us that this is still a new and developing market.

A consistent product and reliable delivery are important to overseas hay buyers.

Officially opened in 2008, China has provided the industry with rare good news during 2015, with imports of U.S. alfalfa up nearly 40 percent. This nation will soon represent a $400 million-plus market.

The market is not without its challenges. While genetically engineered alfalfa remains prohibited, there have been no detections in 2015, demonstrating the success of efforts by exporters and growers to better inspect, test and screen stacks. It is expected that the China market will continue to grow, but the rate of growth will be less than past years. China has been importing alfalfa and some grass hay varieties from other countries, but presently it does not allow the import of any grass hay or straw from the U.S. This has been a focus of the U.S. Forage Export Council, which has been working with officials in the U.S. and China to open the market for grass hays and straw.

Exports to all destinations have been hampered by the strong U.S. dollar. For example, Japanese forage customers since September 2012 have seen their purchasing power decline 40 percent when buying U.S. forage. Canadian and Australian product, meanwhile, represent better options, with purchasing power dipping just 11 percent and 7 percent, respectively. During the same period, buyers in South Korea saw the Won decline 5 percent against the U.S. dollar while strengthening 36 percent against the Australian dollar.

The West Coast port crisis put a cap on an already difficult 2014. Like other U.S. commodities, forage is marketed on quality and reliability. As a country we say, “Our prices may be higher than the competition, but . . .” and try to demonstrate our superiority in other areas. The port crisis exposed a weakness in our argument, creating enough doubt with overseas customers to encourage them to seek other suppliers. And once those suppliers are in place, they are difficult to dislodge.

The U.S. Forage Export Council has been communicating with legislators to emphasize the importance of the U.S. forage industry and the need for more efficient ports. Many of the challenges faced by forage exporters, such as a strong U.S. dollar, are beyond the ability of the industry to affect much change, but better oversight of our nation’s ports is possible and would provide benefits to many.

The U.S. Forage Export Council is a subcommittee of the National Hay Association, comprised of 33 members who represent 90 percent of U.S. forage exports. Members are committed toward ensuring market access based on regulations that are fair and reasonable, and toward promoting the health and success of the forage industry. 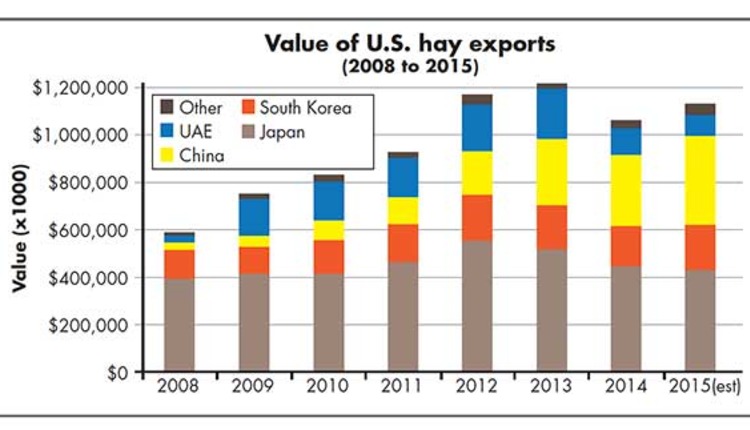 This article appeared in the January issue of Hay & Forage Grower on page 11.

Meadow vole populations explode in the West Next