The author is an extension forage specialist and assistant professor at Montana State University. She can be contacted at emily.glunk@montana.edu with any questions. 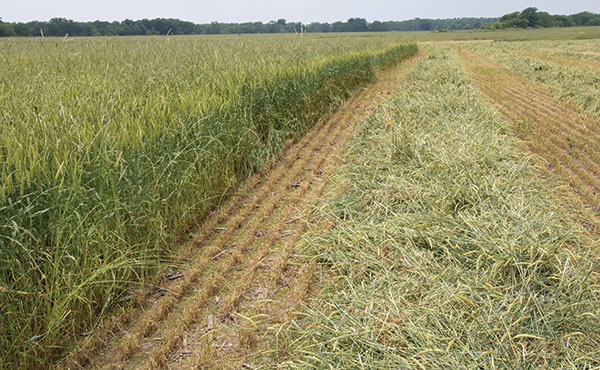 Nitrates can be a big concern when feeding cereal forages and cereal grains to livestock, particularly when cereal grains are being harvested as hay. In 2015, high levels of nitrates were reported in many cereal grains such as oats, rye, wheat and barley, among others, as well as some forages such as bromegrass, fescue, sorghum and sudangrass. Weeds can also be a nitrate source, with species such as kochia, lambsquarters, pigweed, quackgrass and Russian thistle having the potential to accumulate high levels of nitrate.

Nitrate toxicity is not necessarily caused by nitrates, per se, but rather the accumulation of nitrites within the rumen of the animal. When normal levels of nitrates are consumed, microbes in the rumen are able to convert nitrate to nitrite, then to ammonia. They then use this ammonia to produce microbial crude protein.

This excess of nitrite is translocated to the small intestine, where it is absorbed into the bloodstream. Nitrite then binds to hemoglobin, the oxygen carrying compound in blood, converting it to methemoglobin. Methemoglobin is unable to transport oxygen, thereby severely diminishing the amount of oxygen being transported in the blood.

Animals can have chronic toxicity, where they are exposed to low levels of elevated nitrates for an extended period of time, or acute toxicity, which is an ingestion of a large amount of nitrates in a short period of time. Both types can have significant implications on animal performance. A list of the toxicity ranges and some effects on animal performance can be found in the table. For a complete list of signs of nitrate toxicity refer to MSU Extension MontGuide MT200205AG, “Nitrate Toxicity of Montana Forages.”

Nitrogen (N) is a vital nutrient for plant survival and growth. Plant roots take up soil N, convert it to nitrite and then ammonia (similar to the rumen of the animal), where it can then be converted to plant protein. Under normal conditions, there is plenty of energy available from photosynthesis to complete this conversion of N into plant protein. However, there are some cases when energy is deficient and N accumulation within the plant will occur. These include:

1. “Stressed” environmental conditions: This might include drought, frost, hail damage, prolonged cool temperatures, and shading, among others. When the plant is subjected to adverse growing conditions, where productivity and/or photosynthesis is inhibited, the possibility for nitrate accumulation rises.

2. Mineral deficiencies: Studies have found that if some soil nutrients are deficient, particularly phosphorous, potassium and sulfur, there may be an increased likelihood of nitrate toxicity.

3. High levels of soil nitrate: This can occur after excessive application of fertilizer or manure, leading to large amounts of soil N. This can be a localized area or over the entire field.

4. Herbicide damage: Applications of some herbicides may increase nitrate levels in plants.

Here are some measures that can be taken to decrease the risk of nitrate toxicity:

1. Test your soils: Knowing the nutrient status of your soils, and fertilizing appropriately, may help to avoid any accumulation occurring from nutrient imbalance.

2. Control weeds: Make sure to be particularly mindful of those nitrate-accumulating weeds listed above.

3. Avoid cutting or grazing at peak nitrate levels: Typically these occur during the morning, when carbohydrate or energy reserves are lowest. Also, as forage species mature, generally the nitrate levels will decrease. If you are experiencing a drought-ending rain, wait a few days before harvesting.

4. Don’t graze or harvest the lower portion of the plant: Nitrates will typically be highest in the lowest one-third of the plant stem. Cutting or grazing above this portion will reduce the likelihood of excessive nitrate ingestion.

5. Plant species that are lower nitrate accumulators: New species, particularly forage winter wheat and spring barley varieties, have been found to have lower nitrate levels than their counterparts when grown in similar environments.

6. Sample your feed before harvest or feedout: There are in-field qualitative tests available, which can help with harvest management. Most commercial forage labs also offer analyses to obtain the exact nitrate level in your forage.

Know the risk factors for nitrate toxicity in order to try to prevent their accumulation or the feeding of high-
nitrate forage. If your forage does test “hot,” there are a few things that you can do to decrease livestock nitrate ingestion levels. This includes “dilution feeding,” or mixing high-nitrate forages with low-nitrate forages. •

This article appeared in the January 2016 issue of Hay & Forage Grower on page 40.