Be a strategic forage feeder 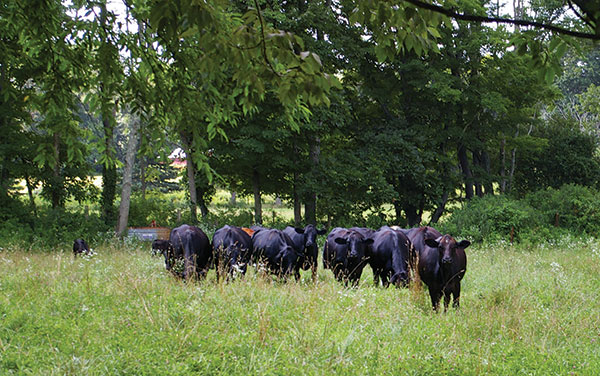 Early spring grass provides enough protein, energy and dry matter intake for milk production and calf weight gain. Later in the season, hay will have to be supplemented.
Both dairy and beef producers are encouraged to feed as much forage as possible to their herds. However, forages such as hay crops or silages often cannot provide all the nutrition necessary to efficiently produce milk and meat.

Having high-quality forage available in beef and dairy cow diets is much more critical during growth and early lactation when protein and energy demands are the highest. Forages that do not meet adequate nutritional requirements often wind up costing the producer more money due to poor production or slower growth rates.

As these beef cows progressed through their lactation, stopped lactating and calves were weaned, their nutritional requirements for energy and protein also decreased. The MSU study concluded that the same forage samples were then able to meet about 80 percent of the protein needs for the cows and almost 50 percent of the energy requirements.

In Hebron, Conn., Marc and Anne Baribault have a 30-head herd of Angus. The Baribaults raise their Angus for both the local grass-fed market as well as the traditional grain-fed market.

As with most beef herds, the cows calve in the spring and run in pairs. On their Briar Ridge Farm, the Baribaults rotationally graze the herd — both cows and calves — on about 20 acres of perennial pastures during the spring, summer and fall months. The early spring grass is the most nutritious for both the lactating cows and their growing calves, providing ample protein, energy and dry matter intake for adequate milk production and aggressive daily gains for the growing calves.

Weather, of course, dictates how long the pastures can hold out. Generally, rainfall diminishes and summertime temperatures slow pasture growth. Forages mature more rapidly during the warmer weather, with or without moisture, and the protein and digestibility of the pastures start to give out by mid-summer.

Marc and Anne monitor the growth rates, and when the pastures start showing signs of diminishing nutrition, they supplement feed. When the herd gets ahead of the pasture, the animals are moved into a feedlot where they will be fed hay for a few weeks while the pastures have time to recover. To meet the marketing and labeling requirements for the grass-fed calves, the Baribaults are allowed to supplement with a purchased alfalfa pellet to maintain daily gains.

Along with the pastures on their property, the Baribaults also rent neighboring farmland to grow hay. The hay that is made and stored is used to supplement diets when the pastures slow down and is the only feed, along with a little mineral, fed during the winter months when there is no pasture.

As is typical in the Northeast, the first cutting for hay crops is often more mature than desired. The second and third are usually better. The first cutting mostly tests between 9 and 10 percent crude protein. The later cuttings can get up to 15 percent. Marc makes primarily round bales and stores them in a hoop-barn that is open at both ends. He begins stacking the hay on one end of the barn and fills it up as the season progresses with later cuttings.

If everything goes according to plan, the cows are dry and pregnant and calves are getting close to market weights as pastures wind down in the fall. At this point, the lower quality first cutting is fed to the cows — when their nutritional demands are not as high. Depending on how they’re being marketed, calves are supplemented with alfalfa pellets or a grain mix for finishing.

The mid and later season forage — the higher-quality hay — is saved for feeding during the late winter and early spring as cows get close to calving. Here is where the higher-quality forage does its most good — at the time when the cows need the extra energy and protein during late gestation. Cows will have fewer metabolic issues as they come out of a cold winter when they have the feed that will meet their nutritional requirements. As such, newborn calves will have lower mortality and be healthier.

Variation in forage quality is always going to be a given for farmers. Knowing the nutritional needs for a herd of cows, whether it be beef or dairy, at different stages of lactation and growth enables the producer to incorporate a lower-quality forage into a feeding program and still have it be cost effective.

This article appeared in the March 2016 issue of Hay & Forage Grower on page 8.