The excessive vole populations we had last fall have taken out significant acres in south central and eastern Idaho. Although some winter ice has decreased the populations, the damage was already done. The question is, “How many of the acres will be rotated to new stands?” The hay prices are not encouraging new plantings. I expect first harvest production numbers will decline because of lost stands and new seedings.

Average temperatures have been 2°F to 4°F higher than normal and the season is about 10 days to two weeks ahead of “normal.” Yields in fields not damaged by voles are probably above average and harvest is beginning for most low elevation areas in southern Idaho.

I see more annual weeds than in the past several years as producers are reducing herbicide applications to limit input costs because of the soft market.

Snow pack levels have been near normal to above normal; most reservoirs should fill. Irrigation water should be available and adequate. An agreement between senior and junior water users will reduce irrigation water used by junior right holders about 13 percent. Careful water management should allow for continued levels of forage production. 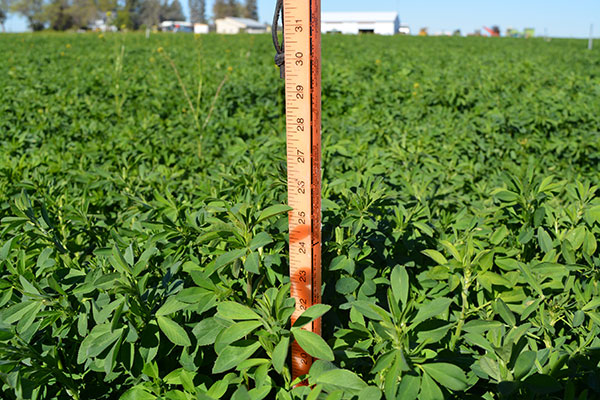 Alfalfa has generally made it through the winter in good shape. There was some concern earlier due to the lack of snow cover, but few cold days occurred. The only reports of winterkill have come from the tri-state region (Iowa, Minnesota, and Wisconsin). It is possible that the few affected fields also had soil fertility or other issues involved.

There was a region from Marshfield to Appleton (northeastern Wisconsin) where heaving occurred on clay soils. The lack of snow cover resulted in repeated freeze-thaw cycles that caused the moist soil to swell and shrink, pushing alfalfa, stones, fence posts, pavement, and other objects out of the ground. Fields where alfalfa plants were pushed out of the ground over 1.5 inches will likely have broken taproots. They will suffer severely from harvesting damage and dry conditions later in the summer. These fields should be terminated either before or after first cutting. Fields with 1 inch or less heaving will likely not have broken taproots, but will suffer damage during harvest and may need to be terminated at the end of this growing season.

Good soil moisture will generally result in high first cutting yields. Recent cool weather has slowed alfalfa growth, but we expect alfalfa harvest to be three to five days early this year. With normal growing conditions, alfalfa will gain about 150 pounds of dry matter per acre per day. We recommend harvesting first cutting for dairy at 28 inches height or the midbud stage, whichever comes first.

On May 5th, I took a 280-mile trip across upstate New York on a cool, sunny day, about 90 percent of it through dairy farm country. I didn’t see field implements working any fields, not even a tractor and manure spreader.

It’s been unusually cold for the past several weeks, with record or near-record lows in the mid-20s last week, a couple of days with highs in the 40s, and most farmers have decided that soil temperatures are too cold to plant corn. There’s a bit of corn planted on sandy soils east of Lake Ontario and a few scattered new forage seedings. Even the aggressive farmers who usually are planting corn in April haven’t started. One custom operator reports nothing happening other than some herbicide application.

Perennial forages are showing the results of the cool weather. It hasn’t been wet — about 2 inches of precipitation (both wet and white) in April, which is moderately below normal, and about 1/2 inch on May 1 and 2. A May 2 Cooperative Extension survey of 35 fields across five upstate New York counties found alfalfa to be 5 to 8 inches tall, but perhaps more tellingly cool-season grasses are only about 6 inches tall. Not much difference by soil type or elevation, with forages at a 300-foot elevation at about the same height as those at 800 feet.