Producers are transitioning from the last remnants of annual ryegrass grazing into tall fescue and warm-season grasses such as bermudagrass and bahiagrass. There is plenty of tall fescue hay being produced in the northern part of the state. In southern Mississippi, producers are making annual ryegrass baleage and started to cut bahiagrass for hay. We expect that most producers will be cutting bermudagrass hay the last week of May. Weather conditions have been optimal for hay production during the last two weeks with temperatures in the mid- to upper-80s and very little rain.

With the improvement in weather conditions, there has been an increase in herbicide applications for weed control. We emphasize the importance of using recommended rates and following any grazing or haying restrictions. It is also very important to pay attention to weather conditions (especially wind speed and direction) to avoid herbicide drift into adjacent crop fields. It’s nearly time to start scouting for insects in bermudagrass such as armyworms and bermudagrass stem maggot; diseases such as leafspot also need to be monitored. 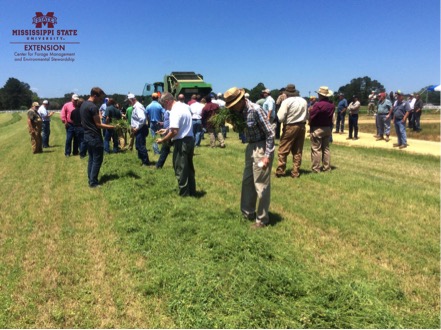 Producers learned about alfalfa/bermudagrass hay production on May 19 at the Alfalfa Hay Production Field Day in Newton, Miss.

Plenty of spring moisture and warmer temperatures in many regions have producers expecting an early first harvest in Montana. In the northern region, the alfalfa has already approached bud stage, with many of the cool-season grasses heading out, as is the case in the rest of the state. This is on schedule to be quite a bit ahead of the growth of last year’s stands. Producers are hopeful that they may be able to potentially get an extra harvest in some areas that often see only one harvest per year; for this to occur, sufficient summer rains will be needed.

Continued timely precipitation after planting has helped with stand emergence on many farms. Some areas started the year in a water deficit, particularly in the northwestern part of the state, and these spring rains put them closer to average.

A portion of the southeastern part of Montana experienced severe thunderstorms and large hail during the middle of the month; this affected some of the hay crops, including the cereal hay fields. Some of the damage was bad enough that producers are now waiting for the regrowth to be able to harvest those stands.

Early warm temperatures and precipitation were also ideal for many weeds, with producers seeing an increase in dandelions and other species, particularly in the southwestern part of the state. Pests such as alfalfa weevil are being found earlier than usual, causing producers to gear up for an early harvest or for spraying to reduce field pest populations.

Overall, we've had a cooler and drier spring than we normally get in Vermont. This past week, the average temperature ranged from 9°F below normal to 3°F above normal across the New England states. We had good conditions for spring forage seedings, most completed in early May. In the Champlain Valley of Vermont, most of our field corn has been planted by now except for some of the less well-drained clay fields. Reports from southern New England indicate their corn has emerged. Timely rain would be helpful.

With the dry conditions, first-harvest forage yields will most likely be light for many farmers this year. Some fields were cut last week but most farmers began cutting this week. With temperatures below normal, we should have decent quality of our grass/legume mixtures if the harvest is made by the end of May. Most grazing farms turned their animals out on pasture in early to mid-May. Pasture growing conditions have been good on our better soils but slow on the well-drained soils. Ideally, we'll get some timely rain after first cut that will boost regrowth and corn emergence . . . just not the record-high June rainfall received last year.