So far this has been a strange season, starting off with some record-high temperatures in early spring. However, most of May was cool to cold with quite a bit of rain/shower activity.

Growers in warmer, low elevation valleys had to delay cutting until curing conditions looked more favorable and, therefore, missed the window to produce "dairy quality" alfalfa. Growers in colder, high elevation valleys are cutting full bore to take advantage of the warm dry weather right now and to assure the alfalfa hay will "test" top dairy quality. Many of the fields are short and low yielding at this time, but growers are petrified of not producing dairy quality because of current market conditions.

There is a huge price differential between Supreme and Fair quality hay (sometimes two-fold difference); with the sluggish market, growers are concerned that lower quality hay will not sell. This is forcing many growers to cut extremely early, erring on the side of caution.

Alfalfa weevil has also been a big problem this year in many areas and some fields were treated multiple times. We found resistance to pyrethroid insecticides, which at least in part explains the need for multiple treatments. Grass hayfields are yielding reasonably well with the cool May temperatures. However, some fields have problems with "brown leaf" attributed to poor sunlight penetration into the bottom of the canopy and foliar disease with the frequent rainfall in May. 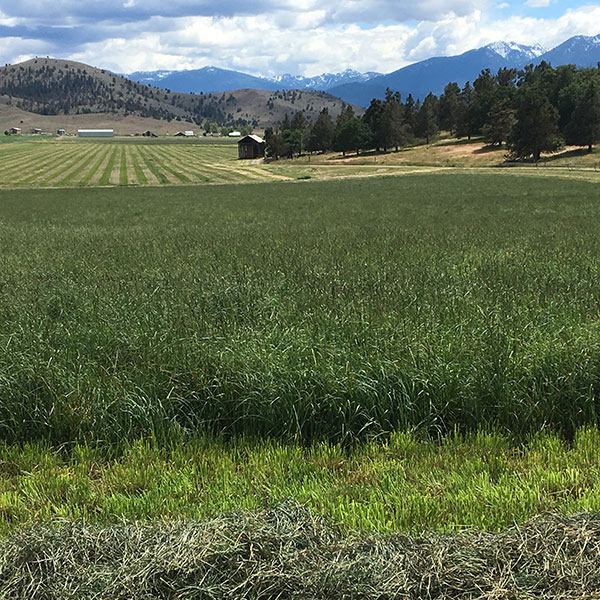 As we enter this growing season, alfalfa fields are showing great potential for good tonnage. The weekend of May 14 and 15 showed much lower temperatures around the state than normal for this time of the year.

The lowest temperature registered in the northeast region was 27°F. It is important to remember that alfalfa can withstand lower temperatures such as 20°F. However, several hours of 25°F to 27°F or lower could damage leaf tissue and cause a problem for alfalfa growing points. After visiting several alfalfa fields in eastern South Dakota, no significant damage was reported and producers proceeded to harvest on a normal schedule.

Significant portions of alfalfa fields are also showing dandelions. Dandelions can cause many potential headaches, not just in your lawn but also your alfalfa field. It is important to remember that dandelions (1) establish in the fall; (2) do not have any toxins and provide high-quality forage; though (3) they can cause wet and moldy spots in hay bales when harvested; and (4) their presence is an indicator of a weak stand.

While it may not be worthwhile to control dandelions with herbicide, stem density is one major aspect to determine overall alfalfa production. A stem density of 50 stems of alfalfa per square foot or below indicates a low yielding field and a weaker stand. Consider rotating if maximum yields are needed. A stem density of 55 stems per square foot or higher indicates the potential for maximum yields. With dandelions, as with most other weeds, the important part of controlling them is assuring you have a healthy field to begin with. 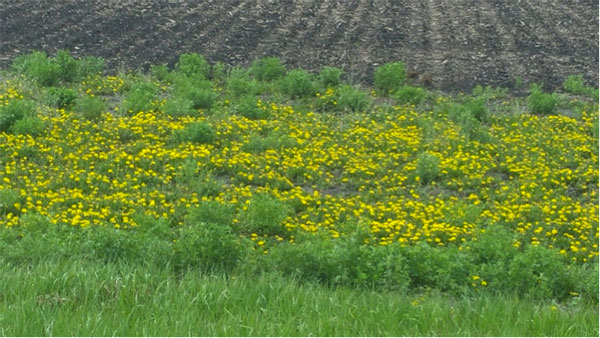 Dandelions take over an alfalfa field near South Shore, S.D.

The Michigan alfalfa crop can be described as feast or famine with a little bit of everything in between. The state is a tale of wet to dry, mud to dust, and snow to summer . . . all in the last month.

If you can relate to this fluctuation in weather conditions, you won’t be surprised at the wide variation in harvest yields and quality. The eastern and southern portions of Michigan have been without significant rainfall in some locations for nearly three weeks. These areas have been hot, dry, and windy.

Many producers in the south central part of the state started harvesting alfalfa in the middle of May. They made a calculated decision to sacrifice yield for Supreme dairy quality hay and haylage.

The southwest portions of the state have seen heavy rains with little opportunity for harvest. These areas are also reporting some weevil damage with the potential for larval feeding on second cutting regrowth.

The overall yields are reported to be slightly below average due to the late snow and frosts over much of the state. However, quality has been excellent where harvest has been on time or early in the drier areas. Northern Michigan and the Upper Peninsula are planning to begin harvest starting the week of June 6.

After a slow start for the graziers due to cool temperatures, grass conditions have rapidly improved. The areas with good moisture have a good to very good crop. In areas with low moisture, pastures are fair.

Corn and soybean planting is nearly 100 percent complete with reports of less than ideal soil conditions. Soil crusting has been an issue as a result of producers planting into wetter than normal soil following rain.