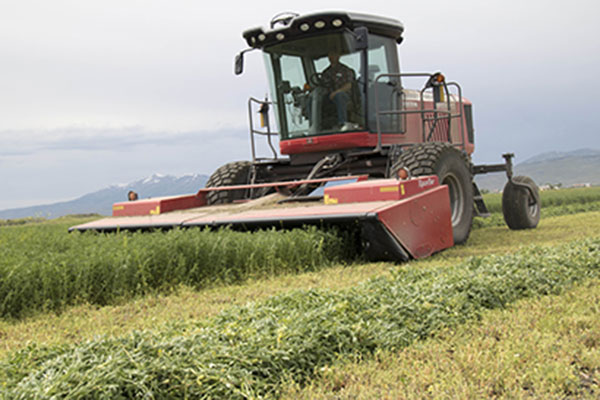 You can cut alfalfa 20 times in one year or one time for 20 years.

This was an axiom told to me many years ago. It relates to the persistence of an alfalfa stand given the intensity of a chosen cutting schedule.

The practicality of cutting alfalfa either one time per year or 20 times per year seemed a bit foreign at the time, but not anymore. Last week, I was on a couple of farms where one cutting per year was something of the norm.

Driving across Highway 20 in south central Idaho puts you at an elevation of about 5,000 feet. Bordered by two mountain ranges, towns are few and far between. Dennis Strom farms just past mile marker 137 near Hill City, a burg that really has no size resemblance to a “city.” Strom is mostly an alfalfa farmer; 2,500 acres worth of combined irrigated and dryland fields. The home farm has been in the family since 1903. Said Strom, “It’s beautiful country, but a tough place to make a living.”

How tough is it?

Strom gets one cutting of alfalfa per year on his dryland and two on his irrigated acres. The dryland averages about 1.3 tons per acre (combined bale weight) while nearly 3.0 tons per acre are annually attained on the irrigated ground. Average annual precipitation is about 14 inches per year and it comes mostly in the winter as snow. From June through October, monthly average rainfall is less than an inch.

“My number one wish for alfalfa variety improvement is frost tolerance,” exclaimed Strom. “Our growing season is about 60 days, but it’s possible get a frost on just about any night of the year.” When alfalfa breaks dormancy in the spring, it’s routine to have it frosted multiple times. As we walked his fields, plants were in a range of maturity as some were set back by frost more than others.

Down the road a distance and just outside of Fairfield is Bill Simon Sr., who farms with his two sons (Bill Jr. and Steve) and a son-in-law (Matt McLam). Each has a financial stake in the operation through land and machinery ownership. Together, they battle the same environmental conditions as Strom — living off winter moisture and experiencing frost on a routine basis. They, too, have both irrigated and dryland fields that total nearly 6,000 acres.

“Timing and the ability to move fast when the weather breaks in spring is critical in this region,” said Simon. A large portion of their alfalfa production is organic hay that is marketed through a broker. Similar to Strom, they get one cut per year on their dryland production and two cuts from irrigated fields.

The unique growing conditions in this part of Idaho do offer some advantages. The cool nights keep plant respiration to a minimum and forage quality is maintained through maturation, especially fiber digestibility. It’s this high quality that helps Strom and Simon produce bales that can be marketed for a premium price.

Going back to that original alfalfa axiom on stand persistence, Strom gets a whopping 15 to 20 years out of his dryland fields that only produce one annual cutting. As can be seen from the picture below, one of his 18-year-old stands is still nearly weed free and productive. In all of his fields, Strom is vigilant about weed control.

As for his stand persistence, Simon noted, “We get about a seven- to eight-year stand life on our irrigated fields and nine to 10 from the dryland. Damage from rodents is a real problem in some fields and it’s often the primary reason we have to rotate a field out of alfalfa and into a cereal grain.”

Although larger pests and wildlife are detrimental to alfalfa stands in the higher elevations, the cool temperatures usually keep insects at bay. “We rarely have significant insect damage,” said Simon. 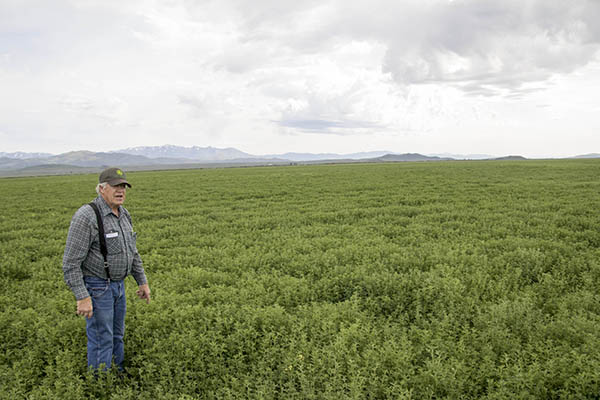 Dennis Strom points to plants in an 18-year-old alfalfa stand. He usually gets 15 to 20 years out of his dryland fields before rotating to a cereal grain like barley.