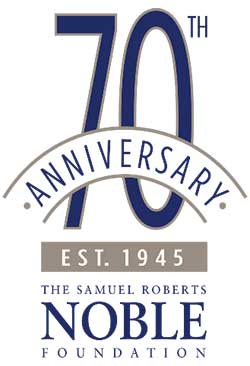 Alfalfa, the queen of forages, has held secrets for centuries. Now, those genetic mysteries are being unlocked for plant breeders seeking to make the forage crop hardier and higher quality.

Researchers from the Noble Foundation, University of Minnesota and the National Center for Genome Resources revealed their advancements in sequencing the alfalfa genome on July 13 at the North American Alfalfa Improvement Conference in Madison, Wisconsin. Alfalfa, a commonly used food for livestock, is worth more than $8 billion annually.

“The alfalfa breeding community has been clamoring for the alfalfa genome, and it has proven to be one of the most complex plant genomes to sequence,” said Maria Monteros, Ph.D., Noble Foundation associate professor in legume breeding. “We have completed most of the alfalfa genome sequence after years of research to advance forage legume genomics with our collaborators.”

Scientists use sequencing to determining the order of the four chemical building blocks that make up a strand of DNA. The organism’s complete set of DNA is its genome, or all of the genetic instructions that determines how the organism grows, develops and interacts with its environment.

“The genome sequence is like a combination inventory, blueprint and roadmap for scientists to focus on genes and pathways that are most important for plant, animal and ecosystem health,” said Nevin Young, Ph.D., University of Minnesota plant pathology professor. “With alfalfa’s genome sequence, researchers know which genes are likely to affect disease resistance, digestibility and ability to produce natural nitrogen fertilizer. This will allow us to breed plants for higher quality and production.”

As a legume, alfalfa can satisfy its nitrogen needs through a naturally occurring symbiotic relationship with bacteria called rhizobia in the soil. This invaluable trait removes the need to use additional nitrogen fertilizer inputs to support plant growth. Understanding the genome sequence could lead to alfalfa plants with increased ability to survive in stressful environments such as drought and animal grazing. It could also produce higher biomass yields when baled as hay, extend its growing season, and adapt better to different soil types and nutrient levels.

“We have made significant progress on the project as genomicists are putting the final pieces into place,” said Joann Mudge, Ph.D., National Center for Genome Resources senior research scientist. “Researchers may now be able to use the information for practical purposes to support plant breeding decisions.”

This advancement serves as the backbone of research data included in the alfalfa breeder’s toolbox, which will provide the international science community with access to publicly available tools and information for alfalfa improvement. The alfalfa genome sequence ties in with the Noble Foundation’s Forage 365 initiative, which seeks to extend the grazing season and enable livestock producers to reduce hay consumption.

“This information is the key to helping us enable farmers and ranchers to grow alfalfa with less resources, like fertilizers and water, and in places alfalfa currently does not grow well,” said Michael Udvardi, Ph.D., Noble Foundation Plant Biology Division director. “This would allow them to grow a more profitable crop and raise healthier animals.”