After continuous rain across the state during the early part of August, producers have enjoyed the first part of September with excellent weather conditions to make hay. Hay is more mature than the average third cut that we normally see, so lower forage quality is expected. Cattle producers in the southern part of the state are preparing the land to start planting annual ryegrass and small grains for their stocker cattle operations.

There will be approximately 750,000 acres planted for winter grazing between prepared seedbed and overseeding perennial summer pastures (bermudagrass and bahiagrass). Producers need to be cautious of planting annual ryegrass too early and making stands susceptible to “blast disease,” which impacts establishment. Blast is a foliar disease. It is caused by a fungal pathogen (Pyricularia grisea) that readily infects and kills leaf blades. Factors that eventually trigger epidemics are not completely understood, but high temperatures and extended periods of leaf wetness in combination with intermittent dry periods favor disease development.

In the northern part of the state, it is time for producers to start fertilizing tall fescue for fall grazing or for stockpiling. Warm temperatures still continue across the state. We have started to see quite a bit of damage from the sugarcane aphids in our summer annual crops such as sorghum-sudan hybrids and forage sorghums. Although we have seen a decrease in armyworm pressure, we are still not out of the woods; there is still a need to scout for armyworm reinfestation that could impact the last hay cut or the newly established annual ryegrass. 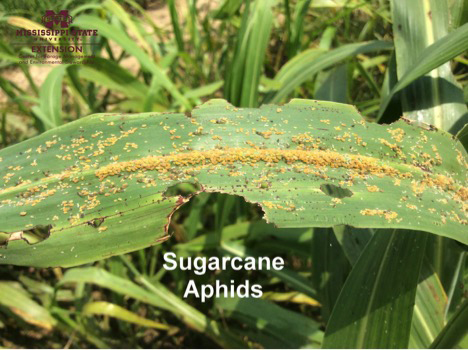 Colonies of sugarcane aphids on sorghum-sudangrass in Starkville, Miss.

After an extremely dry summer, where over half of the state was listed as at least moderately dry, welcomed rains were scattered over a large portion of the state. Many areas received at least a quarter of an inch over the first weekend in September, with some receiving an inch or more. Snow fell at some of the higher elevations, with those areas already experiencing overnight below freezing temperatures the second half of August.

Producers are finishing up their grain harvest, many ahead of the normal schedule, and with wheat prices being near record lows, some are baling their cereals up and marketing them as hay. With the recent rains, there have been some reports of molds and mycotoxins, particularly in the grain hay harvested after heading. Producers are warned to check all hay, especially hay that contains grains, and monitor bale moisture to avoid spoilage and mold growth.

All hay prices have remained fairly steady in recent weeks, with movement around the state reported as moderate. We are seeing many livestock and horse owners start to search out winter hay for feeding and the price is expected to increase over the next couple of weeks.

August was warmer than normal in New England with growing degree days much higher than most years. We are still behind in soil moisture but rainfall has been mixed across the region. In the northern parts of the Champlain Valley, hay crops and corn are looking quite good due to timely rains. Many dairy farmers have taken their fourth cutting and quality should be excellent. However, in some parts of Vermont and much of New England it has remained dry.

Hay crop and corn silage yields will most likely be lower than normal. Some farms in New Hampshire and Maine have only taken two cuttings of hay this year and may get a fall cutting if timely rain is received. Many farmers have started chopping their corn. Although corn is drying down quicker this year due to the hot, dry weather, many farmers are also starting to use shorter season hybrids in order to have enough time to plant a cover crop in September.

Pasture productivity has been mixed across the region, correlating with the mixed rainfall patterns. Overall, this has been a tough year for new forage seedings since it has been dry throughout the growing season. Those areas that received some decent rainfall will fare well.