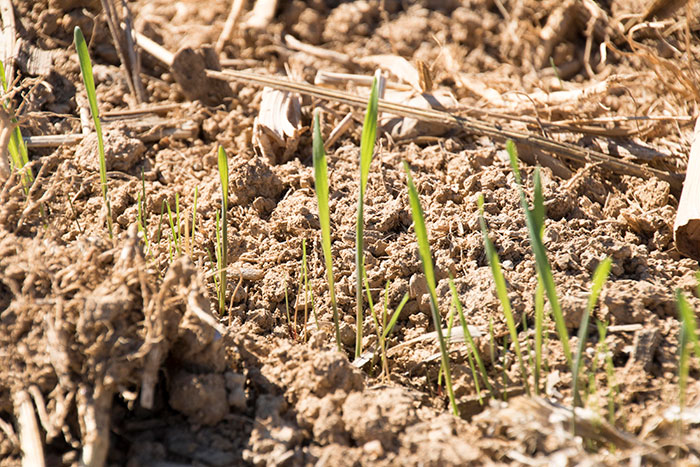 Timing is everything. It’s true in most aspects of life and certainly true in farming.

Getting fall-planted cereals in the ground hinges on favorable late-season weather and the harvest date of the previous crop. In 2017, many acres of winter cereals were planted later than the optimal seeding window because the maturity of annual crops such as corn was delayed.

How much can be expected from a late-planted cereal rye or winter triticale crop?

“Numerous research trials confirm that the later winter rye gets planted, the lower the spring yield,” says Pat Hoffman, Vita Plus dairy technical specialist. “Winter triticale seems to be a bit more resilient to fall planting dates, but very few research trials exist to compare some of the extreme late planting dates we observed this fall.”

Tom Kilcer, an independent crop consultant based in Kinderhook, N.Y., has reported triticale yield declines of over 30 percent when planting dates creep into early October.

Hoffman, a former University of Wisconsin dairy specialist, notes that winter cereal crops are rather resilient plants and need to go through a process called vernalization, requiring a period of exposure to cool temperatures. This is what gives plants the ability to initiate reproductive development.

“Seeds of winter cereal crops do not have to emerge to go through vernalization,” Hoffman says. “The only thing required is for the seed to absorb moisture and sprout, followed by exposure to cool temperatures for the required period of time.”

That required time is at least three weeks with temperatures near 40°F, although the exact temperature and time period varies by species and variety.

Hoffman suggests not giving up on the late-planted cereal fields next spring. Even if the yield potential is somewhat compromised, a crop worth harvesting might still be possible.

“Spring evaluation of winter cereals is relatively simple,” Hoffman says. “If less than 50 percent of the ground is covered, perhaps proceed to a manure application and plant a spring forage crop such as oats or corn. If greater than 50 percent of the ground is covered, you may have enough yield potential to delay corn planting, harvest the forage in mid-May, and then plant corn, soybeans, or another forage crop of your choice,” he explains.