“No matter where they are, PastureMap is a tool that puts data back in their hands so they can use that data to make better decisions,” Su said.

Going deeper, Su explained, “We are trying to help build the regenerative ranching movement and get more dollars back from the food system and into the hands of producers who are stewarding our lands and building soil health. PastureMap is not just a piece of tech to make life easier, it’s about making operations more profitable and changing how producers are rewarded for the work they do.”

Su started her mobile app company along with her co-founders back in 2014. For its first two years in operation, the team spent the majority of their time fine-tuning the grazing app with the help of ranchers’ input during its prototyping phase.

“What we found is ranchers don’t have a lack of data,” Su said. “Plenty of ranchers have 10 years of rainfall data or 20 years of grazing records. What they really need is a tool to help them make sense of all that data in order to actually do something specific in their business.”

In 2016, the group publicly launched PastureMap. While it’s only been on the market for one grazing season, Su noted growth in PastureMap users keeps picking up steam. User numbers have gone from approximately 1,400 in late 2016 to over 7,000 in 36 countries at the time of this interview (July 2017).

“The majority of them are in the U.S. and Canada,” Su explained. “But we also have quite a lot of interest from South America and South Africa.” 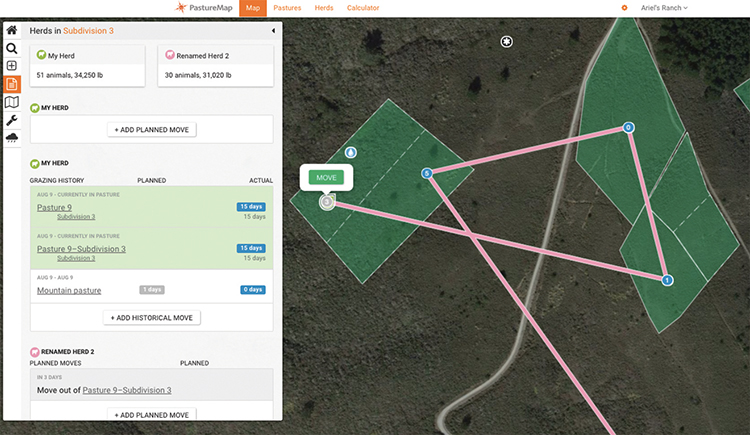 “It is folks with five pigs up to those with 25,000 animals,” Su said. “What we do see is the ones using PastureMap to its full potential are the operations that tend to be larger, have teams of staff, and are focused on making their ranch as profitable as possible. That doesn’t necessarily mean they are the biggest.”

Using a combination of data analytics, mobile technology, and a cloud database, Su explained, PastureMap empowers ranchers to make better management decisions and drive their profitability. Users can take their records with them wherever they go on their phone or iPad. When they’re ready to dig into the data, they can easily pull up analytics tools to figure out important decision points like where to move animals, when to move, what pasture they were in last, and more. For example, said Su, Kansas cattle rancher Brian Alexander uses the grazing app on his approximately 7,000-acre stocker operation to take pasture inventories and records in the field.

“For him, being able to keep track of what his forage inventories are in the field, along with having photos and a map of where he’s grazed, helps him make better decisions and improve the forage quality of his pastures,” Su said. Additionally, producers can input grazing moves and herd data like weights and health records. PastureMap has also incorporated USDA’s soil maps and rainfall data allowing the information to be easily viewed within the app itself.

“In the near future, probably 2018, you’ll also be able to overlay soil organic matter data and then view how it’s improving in different pastures,” Su said. “Essentially, you’ll be able to see how your management is affecting the soil carbon over time.”

When recruiting new users, the first thing her team does is ask producers what their challenges and goals are for their operations. “Each operation is so different,” Su noted. “That’s why it’s important to have teams that are regional and understand the local context.” Along with her main team in the San Francisco Bay area, PastureMap currently has salespeople in Montana, Colorado, Texas, and California.

Currently, PastureMap features three starter plans and three standard subscription packages ranging in price from $25 to $445 per month. Su noted the “Sole Producer” package is their most common subscription among graziers to date and allows users to keep records on up to 1,000 animals. In addition, under the Sole Producer plan, users can add unlimited pastures and photos, conduct rest day and animal days per acre calculations, and export files to Excel.

As PastureMap continues to gain users and grow, Su said her team would continue adding value to their existing product. “Product development and design is a never ending process,” Su said. “We’re always looking for ways to improve our user interface and make it easier and more fun for producers to analyze data.”

This article appeared in the November 2017 issue of Hay & Forage Grower on pages 32 and 33.

Adding grass-finished to a cow-calf operation Next