Checking in on those new seedings 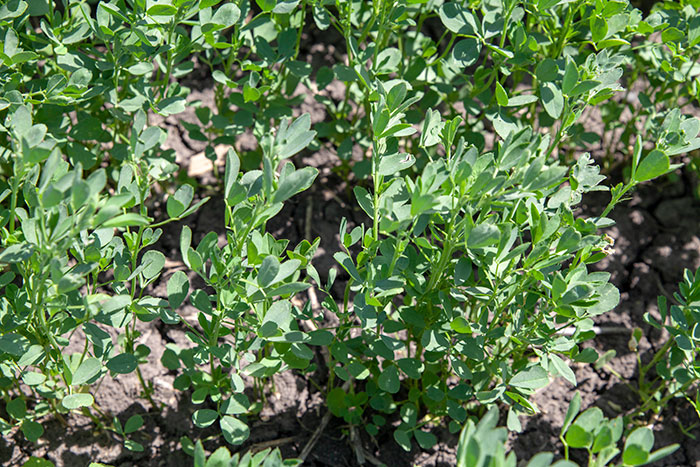 Now that the majority of the growing season is in the rearview mirror, it's easy to focus on harvest concerns and any fall tillage that might be done. However, let's also not forget to assess the status of new alfalfa and other forage seedings that were made earlier this year.

According to Dan Undersander, retired forage agronomist with the University of Wisconsin, farmers generally plant 60 to 120 alfalfa seeds per square foot, but far fewer plants actually establish and survive.

“Regardless of seeding rate, we generally only see 25 to 35 plants per square foot by fall,” Undersander notes in a recent edition of NAFA News, which is distributed by the National Alfalfa & Forage Alliance. He goes on to write, “Less-than-optimum stands, with as few as 15 plants per square foot this fall from a spring seeding, will still provide good yield for next year under most circumstances. With less than 15 plants per square foot, the stand will likely be low yielding and weedy next year.” Before making a decision on a stand, Undersander recommends trying to determine the reason for less than optimum establishment. “Some stands are poor due to weather conditions that are beyond our control,” the agronomist says. “But, before blaming the weather, also consider those factors that are controllable.” Undersander suggests that the following questions be asked: • Was the soil pH at 6.8? Soil pH below 6 may inhibit germination and growth. • Was the soil firm at seeding and was it packed around the seed? Seed planted in loose soil is unable to absorb sufficient soil moisture for germination. • Did the seed get placed at the proper depth? Alfalfa seed needs to be at a 1/4 to 1/2-inch depth; deeper seed will have reduced emergence. Five to 10 seeds per square foot should be visible on the soil surface after seeding with a drill; if none are visible, then the rest of the seed likely went too deep. • Did the stand come up in strips (from a drill) such that portions of adjacent rows have poor stands? This is generally indicative of poor seeding depth control and/or the failure to pack the soil around the seed (especially if seed came up better in wheel tracks than between them). If none of the above common reasons for stand failures apply, then consider other possible causes. These include herbicide carryover from a previous crop, inadequate soil fertility, aphanomyces (race 3), and damage caused by a lodged or overly mature companion crop. Undersander notes there are several methods to boost productivity from a marginal new seeding. “While alfalfa can theoretically be interseeded into alfalfa one year or less after the initial seeding, it seldom provides good results,” he says. “Reseeded stands often still have variable stand density. If you want a good alfalfa stand, I recommend fixing any of the above problems, if possible, and then disking and reseeding the field.” Another option is to seed a grass into thin alfalfa stands. Ryegrass or festolium can be interseeded next spring for a short-term, one-year benefit. Tall fescue or meadow fescue can be interseeded either this fall or next spring if the stand is to be kept for two or more years. “Always be sure to choose grass varieties carefully for yield, rust resistance, medium to late maturity, and winterhardiness,” Undersander concludes.