It’s time to move on

By Matt Poore, Sam Ingram
Ingram is a research assistant at North Carolina State University (NCSU) in the Department of Animal Science. Poore is an extension beef specialist at NCSU.

The most widely planted tall fescue variety today is Kentucky 31 (KY-31), which was released in 1943 by E.N. Fergus. Other events that happened in 1943 include: The U.S. was in the middle of World War II, gas had soared to 15 cents per gallon, and bacon was a luxury at 59 cents per pound.

Many things have changed since 1943, but the KY-31 plant remains the same! Amazingly, it dominates the estimated 45 million tall fescue acres in the U.S. despite its profound negative impacts on livestock productivity.

There are several new tall fescue varieties available to producers that have agronomic characteristics similar to KY-31, but they do not produce the ergot alkaloids associated with poor animal performance. Despite that, planted acres of these newer “novel endophyte” varieties are still small; some estimate less than 1 million acres total.

At North Carolina State University, we did some of the early work with novel endophyte tall fescue. In a five-year grazing study, Jesup MaxQ tall fescue showed similar agronomic characteristics to toxic endophyte-infected Jesup but supported animal performance similar to the endophyte-free Jesup. We challenged the pastures with strip-grazing in wet weather for five years, and the Jesup MaxQ stands were very resilient despite extensive pugging and short grazing.

As a follow up to help with adoption of the technology, we recently started a renovation study that examined the whole production system during the renovation of KY-31 pastures to novel endophyte tall fescue. The goal was to show farmers the entire “picture” and possibly shift attitudes toward renovating old, KY-31 pastures.

Because we wanted to look at the entire system during the renovation, we built a team consisting of a soil scientist, a forage agronomist, a beef nutritionist, and a livestock economist. The replicated field trial is underway at the Butner Beef Cattle Field Laboratory in the Piedmont region of North Carolina, using well-established KY-31 pastures. We examined three different renovation strategies as compared to leaving the pastures in KY-31.

One of the three-season treatments consisted of a single species each season (Sorghum-sudangrass - triticale - pearl millet), and the other three-season strategy used a complex cover crop mix (Ray’s Crazy Summer Mix and Ray’s Crazy Winter Mix, which include a variety of grasses, legumes, and brassicas).

To initiate the study, hay was cut on the KY-31 pastures in the spring of 2017 during the boot stage, and then after two weeks of recovery they were sprayed with glyphosate. The annual forages were then drilled in 7-inch rows and growth was allowed to accumulate until grazing began. Pastures were divided into four sections, and all cattle had access to the same type of shade, water, and mineral throughout the study.

All treatments, including the pastures that remained in KY-31, were rotationally grazed (weekly moves) with growing steers, and gain per head and gain per acre were determined. Cover crops were grazed such that there was enough residual forage to suppress weed pressure and smother KY-31 plants that escaped the chemical burndown. Forage samples were taken throughout the renovation for all treatments to estimate forage availability, forage quality, and species composition.

Input costs for each treatment were tracked and any potential revenue from cattle weight gains was also documented to calculate a net return for each renovation strategy. Baseline soil health measurements were taken just prior to the start of the renovation in 2017 and were taken again directly following planting of the novel endophyte tall fescue in all the renovation treatments this past fall. We plan to examine changes, if any, to soil health during the renovation to provide a better understanding of what is going on below the soil surface, especially in regards to potential benefits of the mixed species cover crop.

The available forage in the tall fescue pastures declined more slowly in comparison to the annuals because the cattle on those pastures simply did not want to eat the grass. In contrast, the animals on the cover crops grazed aggressively and obviously enjoyed the high-quality forage. 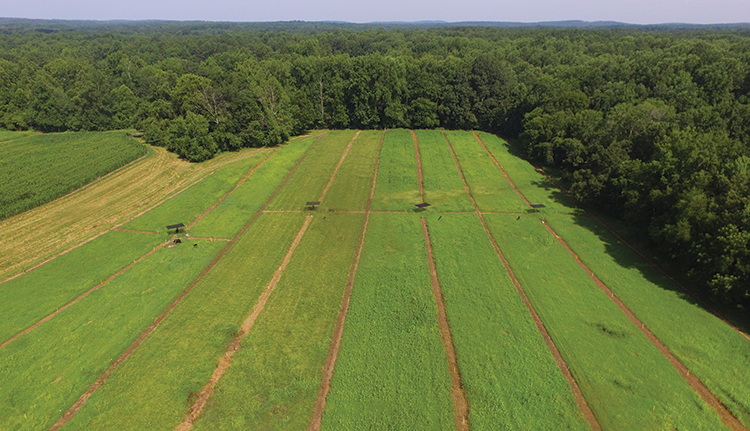 Each experimental pasture was divided into four sub paddocks with shade and water placed in a central location.

The animal performance that first summer painted a strong picture, with the tall fescue pastures actually losing slightly in pounds per head per day and pounds of gain per acre, whereas, the cover crop treatments gained roughly 2 pounds per head per day and 150 pounds per acre. The improvement in animal performance makes sense because forage quality was higher in both of the cover crops compared to the tall fescue, and the ergot alkaloids being produced by the endophyte in the tall fescue were causing the cattle to dramatically reduce intake and looked to be suffering from heat stress.

Input costs during the first season were lowest for the pastures that remained in tall fescue because of its minimal herbicide cost and lack of seed cost, while the highest input costs were incurred for the single-specie cover crop because of the needed nitrogen input, additional seed, and necessity of chemical burndown. The complex mixture cost was slightly lower than the single-specie cover crop because no nitrogen was added to that treatment.

Overall, returns were higher for both cover crops in comparison to tall fescue because the cattle on the tall fescue lost weight during the first season and the economic return from the cattle gains for both cover crop treatments were higher than the inputs. The first season showed that some of the initial renovation costs could be recovered if we are able to graze the cover crop with growing animals. We are excited about the information from the first season and look forward to reporting the full results of the study. 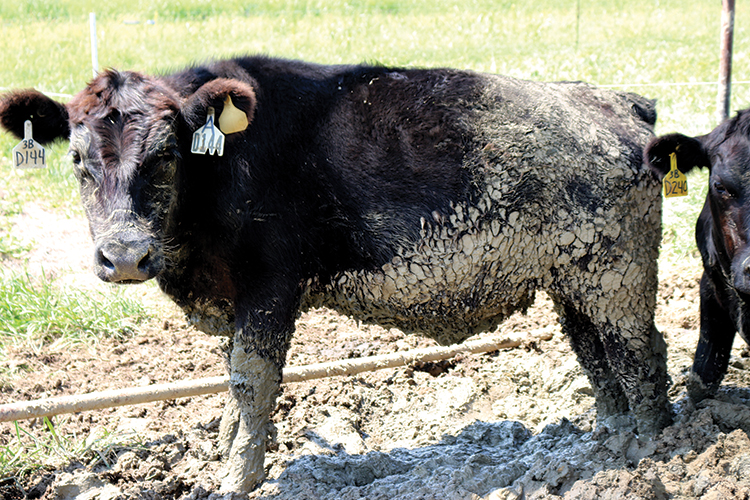 A yearling steer on the control treatment suffering from fescue toxicosis.
As part of the Amazing Grazing Program, our group is focused on helping farmers better manage their forage systems, and results of this study will help with that effort. While producers can do a lot to mitigate the effects of fescue toxicosis, oftentimes the best decision is to renovate at least a portion of their KY-31 pastures to novel endophyte tall fescue.

Six workshops are scheduled in March across the Fescue Belt. They will be held in Virginia, North Carolina, South Carolina, Georgia, Missouri, and Kentucky. Specific information about the Alliance for Grassland Renewal and specific workshop dates and locations can be found here.

This article appeared in the January 2019 issue of Hay & Forage Grower on pages 6 and 7.