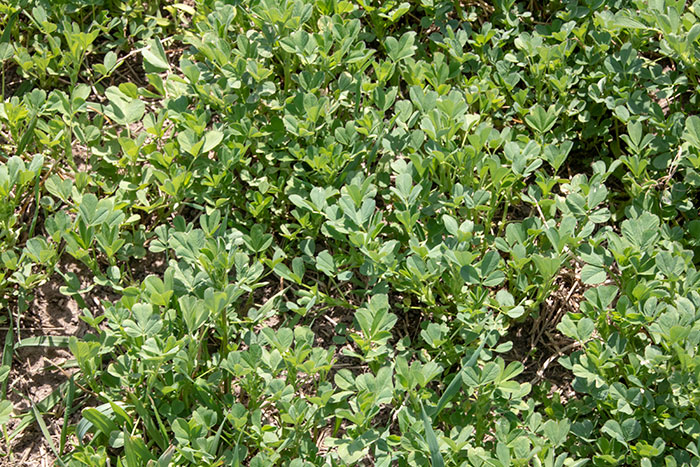 From time to time, the question is raised about fertilizing alfalfa with nitrogen (N) to either boost yields or improve crude protein (CP) concentration. With alfalfa being a nitrogen-fixing legume, such a practice runs counter to both logic and research findings.

Michelle Leinfelder-Miles, an extension farm advisor with the University of California-Davis (UC) based in Stockton, recently addressed the question of fertilizing alfalfa with nitrogen in a UC-Extension Alfalfa & Forage News blog. She had the question posed to her by a hay grower whose customer was seeking higher CP alfalfa hay.

“The best way to improve crude protein is to cut early, choose a more dormant variety, and manage the harvest to retain the leaf fraction,” Leinfelder-Miles notes. “Retaining the leaf fraction is important because the protein content of the leaves is higher than that in the stems.”

“While N fertilizers can in some cases increase the apparent crude protein of the forage by a point or two, this ‘protein’ is not actually well utilized by ruminants,” Leinfelder-Miles writes. “Nitrogen fertilizer usually results in a higher nonprotein nitrogen content (NPN), which is not protein but free N in various forms such as nitrate or free amino acids.”

She explains that these free forms of N are immediately released into the rumen upon ingestion and are incorporated into ammonia. This ammonia must be excreted by the animal at a metabolic cost, reducing feed energy. This also results in excess urea in the manure.

Economics also comes into play when considering a N fertilizer application to alfalfa. Though Leinfelder-Miles notes that yield bumps are occasionally seen with applied N, they rarely are economical.

She also points out that applying commercial N comes at the expense of reducing N fixation by the alfalfa. Mostly, applied N would just replace the fixed N.

“Atmospheric N contributions to alfalfa growth are a major environmental benefit, and it's a shame not to take advantage of it,” Leinfelder-Miles notes. “Nitrogen applications to pure alfalfa stands also can encourage the encroachment of grassy weeds,” she adds.

Finally, the farm advisor points out that a higher CP content may come at the expense of a lower energy content. Thus, it may not make sense to maximize CP values if this means lower concentrations of total digestible nutrients (TDN).

A year for summer annuals Next