More to alfalfa frost damage than meets the eye

By Deborah Samac
The author is a plant pathologist with the USDA-ARS Plant Science Research Unit, St. Paul, Minn. 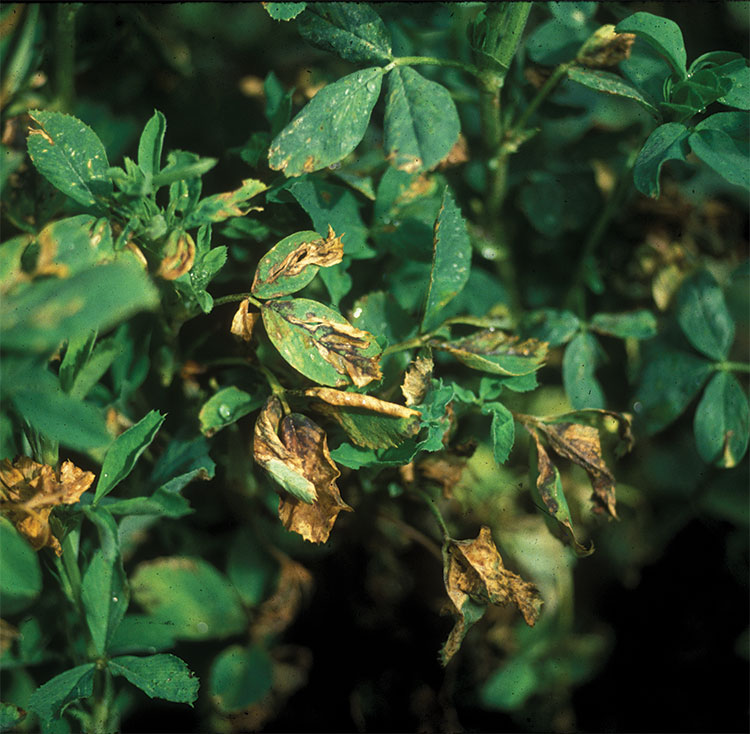 Bacterial stem blight is a disease that has a unique association with frost-damaged alfalfa.
Most alfalfa producers count on the first harvest in late spring to deliver the highest tonnage and best quality of forage of the year. Late frosts can significantly reduce both yield and quality. Yield losses are due to the physical damage from freezing of the alfalfa stem and leaves and can also be caused by damage from a fascinating bacterial pathogen called Pseudomonas syringae (Sue-doe-MOAN-as sigh-RING-ay).

When an alfalfa plant breaks dormancy in the spring and new growth starts, the leaves rapidly become sensitive to frost and freezing injury. Exposure to 25°F for as little as two hours will often result in frost injury. The degree of injury depends on many factors such as soil moisture, soil type, field location, surface residue, and the presence of P. syringae on leaves and stems.

The contribution of P. syringae to frost damage has largely been overlooked in the past, although the disease has been reported as widespread in the central and western United States, including the Pacific Coast, and it occasionally occurs in the East. In the elevated, colder valleys of Western mountainous regions, forage losses from first crop harvests have been reported as large as 40 to 50 percent for some cultivars.

The symptoms of frost damage
and bacterial stem blight can be separated by close inspection of stems one to two weeks after the frost event. A hard frost will cause the alfalfa stems to bend over with a “shepherd’s crook.” If after a few days the stems straighten back up, the stem is uninjured and will resume growth. However, frost damaged leaves and stems will turn white to tan and start to dry out. Often, the top of the plant is most affected.

The symptoms of bacterial stem blight appear seven to 10 days after the frost. Symptoms on stems begin as water-soaked, yellowish to olive green lesions, usually at the point of leaf attachment, and then extend down one side of the stem. Lesions become amber and blacken with age.

A stem may have more than one lesion, and the lower three to five internodes are typically the most severely diseased. Leaves become water-soaked, turn yellow, and are often twisted and deformed. A field may often have symptoms of both frost damage and bacterial stem blight.

A protein that mimics ice 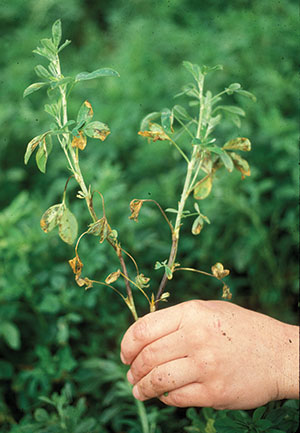 Bacterial stem blight symptoms include water-soaked leaves that turn yellow. Often leaves are twisted and deformed
Bacterial stem blight is associated with frost because of a unique protein found in the outer membrane of P. syringae. This protein mimics the crystalline structure of ice and acts as a starting point, or nucleus, for ice formation. Pure water can be “supercooled” to minus 55°F and stay in a liquid form, but ice forms at relatively warmer temperatures when an ice nucleus is present.

In the presence of P. syringae, ice can form at 29°F to 25°F and cause damage to plants. The ice protein of P. syringae is such an efficient ice nucleus that it is used in most artificial snow making operations. In fact, P. syringae is found in clouds and in pristine natural snow and rain, compelling evidence that the bacterium is involved in global water cycles. To watch how the bacteria causes instant freezing of water, see bit.ly/HFG-ice.

Leaf surfaces support large populations of 1 to 10 million bacteria that usually live in harmony with the plant without causing any symptoms of disease; P. syringae is often the dominant member of these microbial communities. Populations of P. syringae build during cool, moist weather in spring, moving to emerging leaves by water splash, wind, and insects.

The size of the population depends on the host plant and environmental conditions. When P. syringae populations reach a threshold level, the plant is vulnerable to frost damage from ice nucleation activity of the bacterium. This damage creates a break in the leaf surface, releasing nutrients for bacterial growth and an entry point into the interior of the plant.

Research by scientists in the USDA-ARS in St. Paul, Minn., and Beltsville, Md., has investigated both the bacterial and plant components of bacterial stem blight. A standard test was developed for assessing disease resistance and used to screen a number of alfalfa cultivars. Interestingly, the cultivars with the highest percentage of resistant plants were those with high winter survival ratings and strong fall dormancy.

These tools will be useful in selecting resistant plants from elite cultivars for improving resistance to this disease problem. By developing resistance to bacterial stem blight, alfalfa plants should suffer less injury from frost and have better field performance.

Cursing the raindrops Next