By Andrew Eddie
The author is a commercial hay grower in Moses Lake, Wash., and has his own advertising business. 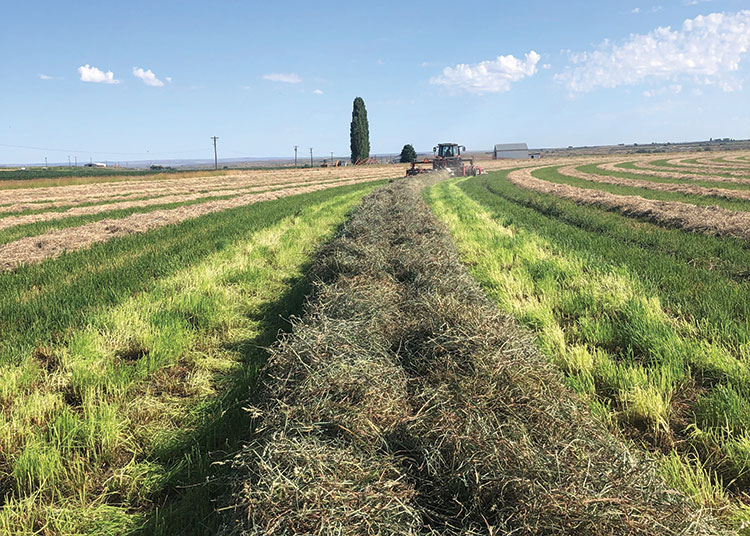 If you drive through any agriculture-based town and stop into the local coffee shop, I can almost guarantee that there will be at least four or five conversations about the weather. It is inevitable that weather is a common topic within the farming community as it affects almost everything that a grower does.

This year has been especially hard on many growers throughout the nation, bringing weather that included drastic temperature swings, record-high temperatures, crop-damaging hail and wind, flash flooding, and rain that just wouldn’t stop.

Weather is perhaps the number one matter that forage growers pay attention to. We will refresh our weather apps 18 times within five minutes to decide if we are going to lay some hay down or wait for a day. In some manner, weather affects every single crop and the need to be aware of potential bad weather moving in is critical information because a simple rain event that moves over fields can result in a $10 to $20 per ton loss in value or more.

To be sure, it’s been challenging this year to put up green hay throughout much of the Pacific Northwest. With a wet spring and unsettled weather constantly pressing into the region, growers tried to time the weather windows just right to be able to get their hay up without any rain, but it has been difficult to say the least.

When rain moves through and hay is down, it not only begins to degrade the visual appearance of the hay, but it also starts to leach the nutrients out of the hay. A sprinkle is usually inconsequential with little impact on color and nutrient content; however, every grower dreads the moment that the rain changes from just a skiff on the windshield of the swather into a persistent downpour.

Unfortunately, it does happen and there is nothing that can be done from a prevention standpoint. You can sit and wonder what would have happened if the hay didn’t get cut that day, but it doesn’t change the situation at hand. Sometimes the crop just needs to be laid down because there is a schedule to keep to get other crops harvested in time or you are needing to rotate that field into something different. It is part of farming and it is inevitable that someone who grows hay will get at least one crop rained on during a season.

Rain may seem like a bad thing when the hay is down, but it’s rarely a total loss. We’ve found that there is usually a market for every single type of hay and there are people who want or need a wide variety of qualities.

Everyone has their own approach to “beating” the weather, but here are a few things we find helpful to avoid or alleviate the sting of rain’s impact on our cash hay crop:

1. Get a good crimp. This ensures that your hay crop dries as quickly as possible. When your crop is conditioned well, the stems move moisture out and allow the plant to dry out. This could be the difference in getting your hay up right before a rain or not.

2. Lay the windrow as wide as possible. This potentially sacrifices some color because more surface area is exposed to the elements, but it will also allow for faster dry down both before and after a rain event.

3. Make sure the ground is as dry as it can be before cutting. There is nothing worse than competing against moisture coming from both above and below the windrow.

4. Let it dry. If a significant rain event occurs, let the hay dry completely before further manipulation. You don’t want to go out and flip the rows over that are still wet on top. They’ll never dry if flipped to the bottom.

5. Breathe. Yes, farming is stressful and full of twists and turns and rained-on hay may be worth less money, but it can also still be sold and moved. Dairies are often more than willing to take a lower grade hay for the right price.

The weatherman isn’t always right, and that’s just a fact of life. Farmers always make jokes about how the weatherman is one person who can be wrong 90 percent of their career and still have a job. If weather was predictable, then every single person would be able to miss the rain in the first place.

While farmers can control most everything in their operation, weather definitely isn’t one of them. In the hay business, you grow by how you weather the storm.

This article appeared in the August/September 2019 issue of Hay & Forage Grower on page 22.

Alfalfa may be more salt tolerant than we thought Next