Locoweed is a problem on many fronts

By Ashley Wright
The author is an area assistant with the University of Arizona based in Cochise County. 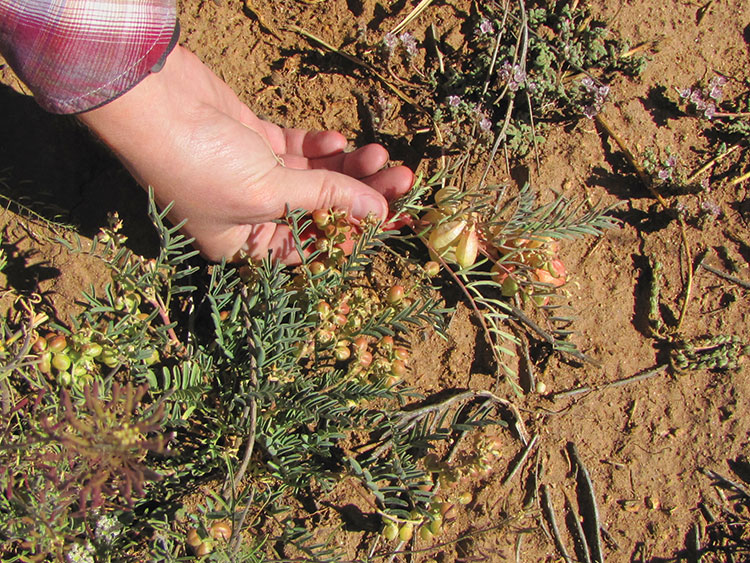 Found across western North America, locoweed (also called milkvetch) is an ever-present concern for livestock grazers, particularly in the early spring and late fall when other forage sources are less palatable or not yet available. While there are over 300 plants belonging to the genera Oxytropis and Astragalus (North America), and Swainsona (Australia), only around 20 species are associated with locoism in livestock.

The toxic compound responsible for locoism, swainsonine, is synthesized by an endophyte fungus that inhabits the locoweed plant. The compound impairs several cellular processes, including enzymes that metabolize sugars and carbohydrates, which ultimately disrupt organ systems, including the nervous system, digestive system, and reproductive organs.

These perennial plants feature a long tap root with grouped odd-pinnate compound leaves that are 8 to 12 inches long. Flowers are white or purple and resemble those of pea plants, which are in the same family. Some species of Astragalus are also selenium accumulators, creating confusion around livestock poisonings caused by the toxin swainsonine (the toxin responsible for locoism) or selenium toxicity.

Further complicating the issue, there are approximately a dozen species of Astragalus that can produce a nitrotoxin compound, while the rest are completely harmless and in fact are good sources of nutrition for grazing livestock. Differentiating between some of these species can be very difficult.

Unlike most toxic plants, locoweed is relatively palatable to most classes of livestock and animals can become habituated to consuming it. Poisonings typically occur in early spring before other forages are readily available, or in late fall when other forages have matured out for the winter.

Locoweed seeds can “bank” in the soil for many years and germinate quickly following unusually wet seasons. This leads to some years seeing especially large numbers of locoweeds and cases of locoweed poisoning. The plant remains toxic when dried.

Poisoning from locoweeds is a chronic process, and animals must consume the plant regularly over a period of weeks. Signs of toxicity include odd or erratic behavior; extreme nervousness; a slow, staggering gait; staring; depression; weight loss; and lack of coordination. At higher altitudes, cattle may be more prone to brisket disease when consuming locoweeds.

Locoweed poisoning also negatively affects both the female reproductive processes and spermatogenesis (the formation of sperm), causing bulls and rams to be temporarily infertile for up to 90 days after consumption. The toxin causes reduced ovarian function leading to lengthened estrus cycles and decreased pregnancy rates. Pregnant animals may abort their fetus or give birth to offspring with mental and skeletal deformities. Additionally, the toxin is transferred through milk where it can negatively affect nursing calves, foals, or lambs.

Locoism is diagnosed primarily through displayed symptoms and positive identification of toxin-producing locoweeds grazed by the animals. While it is possible to detect the toxin swainsonine in blood serum, the rapid metabolism and short half-life of the compound severely limits the usefulness of testing blood samples. There is no treatment for locoweed poisoning beyond removing affected livestock from access.

Animals that are severely affected may never recover fully and continue to exhibit residual behavior patterns that do not disappear for several weeks, even when removed from locoweed sources. If livestock recover enough to enter the food chain, they should be withheld from slaughter for a minimum of 28 days with no access to locoweed to allow the toxin to completely clear from all tissues.

Limited research has also shown that horses are more likely to seek out and consume locoweed. Therefore, horse pastures should especially be checked regularly for signs of locoweed infestation. Horses should not be allowed to graze any locoweed-infested pasture until the plant has been eradicated.

The most effective means of locoweed control is to restrict access to the plant by moving livestock to another less infested pasture, especially during critical times when locoweed is likely to be more palatable than other forages. Additionally, take steps to prevent overgrazing on locoweed infested areas so that livestock are not forced to begin consuming it.

Livestock that begin grazing locoweed may become habituated to consuming it. These animals should be removed from the herd; they may influence other animals to begin consuming locoweed. Herbicide treatment is very effective for controlling locoweed when applied at the correct time; however, large-scale application can be difficult or costly, and the application must be repeated yearly due to the seed banks present in the soil. Some producers in heavily infested areas have found regular herbicide treatments to be beneficial in preventing economic losses to their operations.

This article appeared in the November 2019 issue of Hay & Forage Grower on page 11.

A case for no-till Previous