This father-son duo was born to chop

Don Witt begins another round with the first track-driven forage harvester sold by Claas in the U.S.

Don Witt remembers his dad mowing hay with a 5-foot sickle bar mower and having a one-row, pull-type forage chopper that he used to do custom chopping for the neighbors. “After milking, he’d make us kids go to the shop and sharpen the blades,” recalled the now 80-year-old patriarch of Witt Farms LLC near Monticello, Wis. 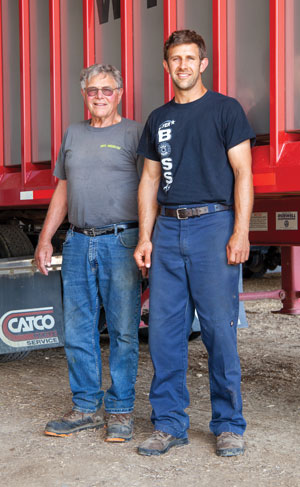 Don and Mike Witt operate a custom harvest and manure hauling business in addition to farming 1,000 acres of their own.
Times have changed.

These days, Don finds himself chopping corn with a new Claas Jaguar 990 Terra Trac. It was the first such tracked model sold in the U.S., and it was delivered just in time for the 2019 corn silage harvest season.

Don farms with his son, Mike, and together they own and operate a custom harvesting business responsible for chopping between 4,500 and 5,000 acres of corn each fall and harvesting multiple cuttings from over 2,000 alfalfa acres. They are helped by two full-time and many part-time employees.

“The business model has changed through the years,” Mike said. “We used to have a lot of smaller dairy farm clients, but now most of the business is comprised of servicing just a few really large farms. We may be two weeks at the same place,” he added.

In addition to custom harvesting, the Witts own 1,000 acres of land that is planted mostly to alfalfa. Corn is used as a rotation crop between alfalfa stands. Much of their own crop is chopped and goes into the farm’s bunker silo. It then gets hauled out daily to several neighboring dairies for inclusion in their total mixed rations (TMR). The remaining acres are harvested and used for Don’s 100 beef cows and feeders, both of which are raised in confinement barns. The Witts also purchase additional standing hay and corn from neighbors.

After corn silage harvest in the fall, the Witts do custom solid manure hauling for a large dairy that separates its manure into liquids and solids.

Around the time Don was entering high school, his dad bought the farm that is home base for the current operation. Don moved on the farm right out of high school. “I had two brothers, so Dad kept buying more land to keep us working and out of trouble,” he said with a chuckle. It was also around that time when Don told his dad that if he had to milk cows, he wasn’t going to farm. “That was the end of our dairy enterprise, but we kept the beef cows and continued row cropping and custom harvesting.”

Mike, who is now 40 years old, went to college at the University of Wisconsin-Madison and majored in horticulture. “My plan was to become a college professor,” he explained. “During a teaching assistant stint in graduate school, I realized that teaching wasn’t my thing. I hated it. After shifting to research, it wasn’t long before I figured out that what I really wanted to do was farm . . . so I eventually came back home and started the business of selling stored silage to farms and helping with the custom harvesting.” 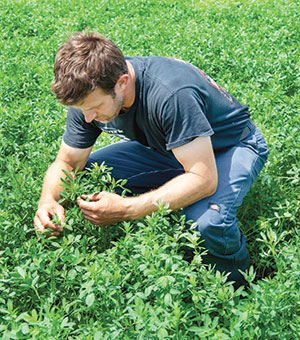 Mike Witt checks alfalfa on one of his own fields. The fields average 5.5 tons per acre and are usually terminated after three production years.

How did Don end up with the first U.S. track-driven chopper?

He explained it this way: “Several years ago, I went on a Claas-sponsored trip to Germany and attended the Agritechnica farm show. I first saw the machine there in the company’s exhibit. When we got back, I told them that I wanted it to be my next chopper and became the first name on their waiting list. They delivered it last August (2019),” he added.

When asked why he was so adamant about getting a track-driven machine, Don emphatically stated that he was after a smoother, more comfortable ride. “I talked to different grain farmers who had combines with tracks, and they just swore by them.”

The new addition to the chopper fleet couldn’t have come at a better time as the fall of 2019 brought constant rain and difficult corn silage harvesting conditions. “Last year was just horrible, and there were a lot of days we wondered why we were doing this,” Mike said. “Of course, when the weather cooperates, it’s just a lot of fun.”

All of the Witts’ equipment is set up with GPS tracking. “In my opinion, you’re foolish not to have it,” Don exclaimed. “It takes so much stress off the operator, reduces truck traffic on alfalfa, and you’re always taking a full cut with the chopper or mower. It’s amazing how much more productive you can be with GPS tracking.”

The Witts’ line of harvesting equipment also includes two Kuhn 36-foot mergers and two 36-foot Pottinger triple mowers without conditioners. This pairing enables them to get seven full swaths into one windrow. For hauling, 10 Meyer forage semitrailers and three forage wagons are owned. Most of these units are equipped with floatation tires.

They had a need

In addition to the tracked forage harvester, the Witts also own another unique piece of equipment — what they call a reloader; in fact, they have two of them. It’s a machine that they requested to be built. After approaching several companies, Meyer Manufacturing (Dorchester, Wis.) finally built the large conveyer that extends from the field to the road. In wet conditions such as 2019, they chop corn into their forage wagons, which then are dumped onto the conveyer in the field. The conveyer loads the semitrailers that remain on the hard-surfaced road. This eliminates getting mud on the roads and allows for corn chopping where fields are too wet for the semitrucks.

The original request for the reloader was made by the Witts for use in their solid manure hauling business. For manure, the semitrailers unload in the field onto the reloader and the manure is conveyed into the spreader.

The Witts have one packing tractor of their own and subcontract for others, usually putting on two tractors per chopper. They also hire other people with semitractors and tractors to pull the forage boxes and trailers. All of their dairy farm clients do their own bunker and silage pile covering.

The Witts utilize a reloader for their dry manure hauling business and when fields are wet during corn silage harvest.

The Witts aren’t just custom harvesting gearheads. Because they grow and manage 800 acres or more of their own alfalfa each year, Don and Mike must also be agronomists. They grow their alfalfa using a largely conventional approach.

Up to this point, the Witts have chosen not to use any traited alfalfa varieties, although they did put in a field of HarvXtra alfalfa last year “just to try.” Their alfalfa is direct seeded in the spring and sprayed with conventional herbicides for broadleaf and grassy weed control. They shoot for four or five cuts during the full production years. “On average, we get 5.5 tons of dry matter per acre,” Mike said. “Some years are better, some worse.”

It’s not often that the Witts take a late fall cut. “It always looks like there’s more there than what actually is,” Don commented. “They always say that what you gain with the late fall cut you lose in the first cutting the next year.”

The Witts usually get three years of production after the seeding year before alfalfa stands are terminated. Mike noted that they typically don’t terminate alfalfa stands with herbicide until spring. “We used to do it in the fall, then sometimes wished we hadn’t if it happened to be a bad winterkill year,” he said. Once sprayed in the spring, they generally have a custom operator come in and no-till corn into the field, then spray one more time after the corn has emerged.

With a lot of highly erodible land, the Witts usually plant wheat as a cover crop after the corn is chopped off. Mike typically sprays the wheat out the following spring before alfalfa is seeded.

Interestingly, the Witts recently noticed more vigor from a new alfalfa seeding following two years of corn compared to where stands followed only one year of corn (their normal practice). This is something Mike wants to investigate further. He is planning to try berseem clover and Italian ryegrass the year following first-year corn in an effort to get two years between alfalfa stands without planting back-to-back corn crops on erosion-prone land. Similar to alfalfa, the berseem and ryegrass will be cut and chopped, although he realizes there will be less yield.

With 80 years in the rearview mirror, Don Witt gives no indication that he is in a retirement state-of-mind. This fall, he will climb onto his track-driven chopper and smoothly and accurately navigate thousands of corn rows. Along with him will be his once professor-bound son who couldn’t shake the grip and allure of the home farm. They’re both wishing for a less stressful harvest this year and hoping the reloaders can stay parked until manure season. If that’s not the case, they’ll be more ready than most for the challenge.

This article appeared in the August/September 2020 issue of Hay & Forage Grower on pages 6 to 8.