He wanted a better way to feed hay

By Ann Behling
The author is a freelance agricultural writer based in Northfield, Minn. 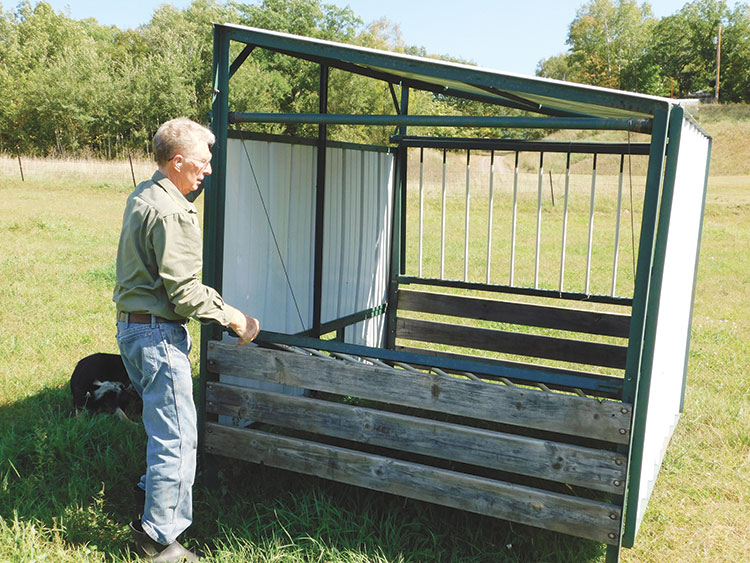 Bill Kurtz developed this horse feeder that is designed to reduce waste and control intake.

Bill Kurtz claims the controlled-access bale feeder he built for horses reduces hay waste, and a university study verified it. A feeder with narrow, but flexible, openings, also prevents cattle from pulling out large amounts of hay and trampling it.

The two feeders aren’t the only inventions created by this St. Croix Falls, Wis., award-winning owner of Kurtz Angus Farm. Over the past 50-plus years, along with his wife, Barb, Kurtz, now in his mid-80s, has invented a number of tools and implements aimed at improving his farm’s efficiency. To promote them, he named his company JSI Inventions.

Necessity, a lack of funds, and a large pile of scrap iron have often been the inspiration for his creations. “If I see a need for something, I’ll design and build it,” Kurtz said, who has about 60 cow-calf pairs and several hundred acres of cropland and pasture. “I like a challenge, and it’s very satisfying to make something I can use around the farm and potentially share with others.”

He has applied for and received several patents on his inventions over the years. “I’ve been a cash cow for the patent office,” he chuckled.

Among his favorite farm inventions are a big-reach system for skid steer loaders, back blades, a three-point hitch controlled from the tractor seat, posts for pole sheds and decks, and bale forks. But the bale feeders are the ones he’s currently hanging his hat on.

In addition to an online presence and ads in newspapers, Kurtz has appeared on television programs, including “Twin Cities Live” and the “Million Dollar Idea Show,” to explain and promote them.

His Waste Less Horse Feeder allows owners to control hay consumption more accurately than other models, he said. In a University of Minnesota study, the horse hay feeder resulted in the least waste (5%) among the nine feeders evaluated.

Its key components are two panels that are lowered onto the bale by turning a crank. The panels have vertical rods spaced a few inches apart. The space between rods can be changed to accommodate different animal sizes by simply removing two bolts and sliding them closer together or farther apart.

Horses put their muzzles, not their entire heads, between the rods to access hay. That helps keep dust out of their eyes and noses. They feed from the top of the bale, and when they lift their muzzles out, the rods wipe off the excess hay, which falls back into the feeder. If the horses pull any hay out of the feeder onto the ground, the panels don’t have to be lowered until they clean it up.

In most cases, the panels are lowered once or twice a day depending on the number of horses being fed. Doors on the front of the feeder can be opened to easily accommodate the insertion of a big bale with a loader. It comes ready-to-use and features a steel roof to protect the forage from the elements.

Cattle can insert their heads through larger openings than they can back out of, noted the inventor. That’s why he built the Waste Less Cattle Feeder, which lets cattle easily move their heads into and out of the feeder while keeping the hay inside.

The feeder tapers in toward the top and has a 2-foot-high metal skirt at the bottom. Above the skirt is a series of 12-inch-wide rubber belts, each attached to a 1.5-inch-wide steel upright. There’s about 8 inches of space between the belts.

As the animals put their heads into the feeder, the belts bend in alongside their necks. As they back out, the belts flip inward to keep excess hay in the feeder, he said.

His Waste Less Horse Feeder can be used for horses and cattle. The Waste Less Cattle Feeder is designed only for cattle. Both are available in models for round or rectangular bales. Kurtz has sold them to buyers throughout the U.S. and Canada and fielded inquiries from as far away as Europe.

For more information, visit www.teamjsi.com. This article appeared in the August/September 2020 issue of Hay & Forage Grower on page 24.

Driven to save alfalfa leaves Next

Save the land, make a profit Previous