Driven to save alfalfa leaves 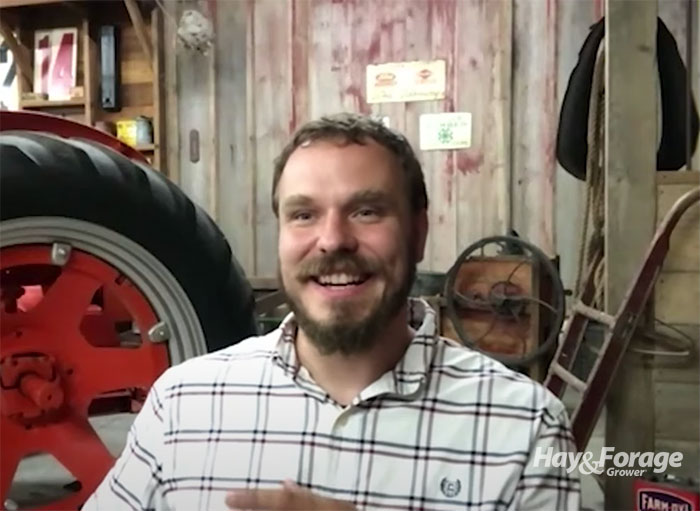 For Harry Adams Jr., it all started with a trip to the World Dairy Expo in Madison, Wis., and a visit to the building where the World Forage Analysis Superbowl samples are displayed.

“I couldn’t believe the relative forage quality (RFQ) values on some of the hay from the West and even from some of those in Wisconsin,” said the Byron, Ill., dairy farmer, who provided one of the virtual Dairy-Forage Seminar presentations this year. “I thought, if they can do it, then I should be able to as well.”

Ever since that experience, Adams has become obsessed with saving alfalfa leaves to feed his small dairy herd. “I’m looking to maximize protein, total digestible nutrients, and fiber digestibility,” Adams explained. “I don’t purchase a protein supplement, and I try to keep feed costs as low as possible.”

Adams gets four to six cuttings of alfalfa per year on his northern Illinois farm. Most years, he takes four cuttings before the end of August and a final late-fall cutting in mid-October.

“For me, the first thing I want to do is get that first cutting off in mid-May, when the alfalfa is still vegetative,” Adams said. “By doing so, there’s still enough soil moisture for rapid regrowth and it sets up the cutting schedule for the rest of the year. We usually chop our first and second cutting and store it in bags.”

The dairyman looks at growth stage and plant height to determine when to cut. He also likes to let one cutting go to at least 10% bloom, which he feels helps maintain plant health and stand life. His typical cutting schedule is mid-May, mid-June, late July, late August, and mid-October.

Unlike most forage producers, Adams likes to bale as much of his crop as possible into small square bales. This allows him to bale at a slightly higher moisture content than what would be possible with a larger hay package.

Adams prefers to start mowing in the early afternoon, allowing the crop time to build sugar content during the morning but also dry down enough by sunset to limit overnight plant respiration.

Once the hay is cut, Adams doesn’t like to manipulate his alfalfa swath any more than he has to. When chopping, that usually means not at all.

“You always have to be a student of making hay, learning as much as you can,” he said. “I noticed that in the West they do a lot of their work at night. Now, I will often rake hay in the evening. For those mid-summer cuttings, there’s always a nice window from about 7 p.m. to 9:30 p.m.”

He continued, “To make high-quality hay you have to commit to excellence and pay attention to the details. For example, we have a tractor that is set up just for hay with the tires set as wide as possible. Once the hay is cut, at no point does a tire touch the mowed swath other than on the headlands.”

Adams is a stickler for saving as many leaves as possible. “When you look at those tables for dry matter losses, it’s not stems that you’re losing . . . it’s the leaves, and that’s where the money is!” he exclaimed.

Another thing that Adams does is to remove some of the tines off of his rake, which further minimizes machine-to-hay contact. “Sometimes the weather doesn’t cooperate, and we’ll have to get more aggressive with the manipulation, but I always plan for the ideal crop,” Adams said.

If the forecast is for on-and-off rain events over a period of two weeks, Adams will cut his alfalfa just before a rain, and then hope for adequate drying conditions before the next shower. “When hay gets rained on while it’s still freshly cut, a lot less damage is done than if it gets rained on when it’s almost dry,” he opined.

Adams commented that alfalfa variety choice makes a big difference for both yield and quality. “Just because your seed person says a variety is great doesn’t necessarily mean it is,” he said. “I check variety test results and do some testing on my own farm. One of the things I want to do in the future is establish small test plots in my backyard, which I currently do for corn.”

Adams doesn’t own newer equipment to make his high-quality hay. “It’s not the age of the equipment, it’s how you maintain it and make sure it’s functioning properly,” he said. “You have to be willing to do things like rolling up a wad of aluminum foil and sending it through your conditioner rolls to make sure they’re set properly.”

Adams cuts his hay with a 30-year-old sickle-bar mower. “I think one of our best tricks is to grind the edge of the guards along the bottom of the slot where the sickle reciprocates,” he noted. “Those edges get worn and rounded, and keeping them square makes a lot of difference in how hay is cut. We do the same thing for our combine.”

As for improvements to his system in the future, Adams is looking at acquiring a three-point hitch mower without conditioning rolls for those fields he plans to chop. “This would eliminate leaf loss through the conditioner,” he explained.

Adams is also contemplating the purchase of a small windrow inverter, which he feels might be gentler on the hay when the windrows only need to be turned. He currently uses his old roller-bar rake for that task.

Finally, Adams noted that you can’t make high-quality hay if you don’t grow high-quality hay. “Good quality soils help ensure good-quality hay,” Adams said. “We fertilize after first cutting and then after our late August cutting. It’s hard to get all that we need applied by just putting it all on at once. We also include sulfur and boron, which I think has really helped improve the plant growth uniformity across the field. We no longer have those lighter, shorter patches in our fields during mid-summer,” he added.

In a relatively short amount of time, Adams has become a serious practitioner of making high-quality alfalfa hay and haylage in the humid Midwest. He has found that the secret is not necessarily new equipment, but rather it’s a keen attention to the details. Sometimes, he admits, you also need a little luck. That was the case in 2019 when he was named Grand Champion Forage Producer at the World Forage Analysis Superbowl with his Dairy Hay division entry that tested 342 RFQ.

“Our Grand Champion hay entry in the World Forage Analysis Superbowl last year was from a mid-October cutting,” Adams related. “The alfalfa had been cut for about five days and we were able to bale it without raking. That’s not something we’re usually able to do.” Yes, sometimes you do need a little luck.

A lifetime of building better haying mousetraps Next

He wanted a better way to feed hay Previous