Producers have a new tool to fight saline soils expansion

The South Dakota Soil Health Coalition strives to help producers and landowners improve the health and fertility of their soil. One issue SDSHC focuses on is the expansion of saline soils — especially in the Upper James River Basin, where an estimated 2 million acres are now affected.

Fortunately, producers in that region have a new source of funding for conservation practices designed to remedy areas of high salinity.

The U.S. Department of Agriculture Natural Resources Conservation Service in South Dakota has implemented a new Environmental Quality Incentives Program signup for producers in western Day County as well as portions of Brown, Marshall, Spink and Clark Counties to help combat the problem of saline soils. 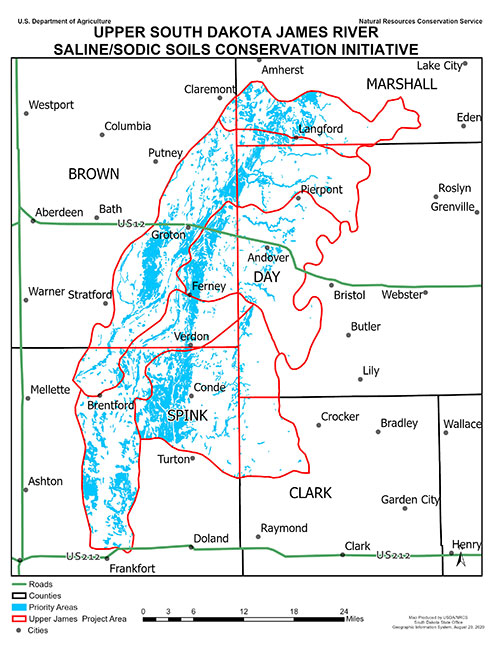 Rainfall patterns and the lack of good water use land practices and can influence the spread and severity of saline soils. Land management practices have prevented the leaching of salts over time, which has created shallow saline groundwater in wide areas of the James River watershed.

“We’ve sort of farmed ourselves into a little bit of a corner,” Hubers said. “The problem has become so big you couldn’t ignore it if you tried to.”

The good news is that conservation practices have been identified to fight the problem. These include crop rotations, the planting of cover crops and the implementation of reduced-tillage or no-till practices.

“We can fix it, and we can fix it in such a fashion that it not only helps the farmer, but also every rural community in South Dakota,” Hubers said.

That’s the aim of the new EQIP signup.

Producers in the defined program target area of the upper reaches and eastern edge of the James River Basin who are farming soils that are saline/sodic or have the potential to become saline/sodic can receive financial assistance if they agree to implement the conservation strategies of the three-year program.

“There’s approximately a million dollars annually in designated funds for this effort,” Hubers said. “If you’re willing to do the practices set forth by this initiative, your odds of funding are extremely good.”

Producers in the target area with unproductive saline or sodic soils in their fields that are costing them money will benefit from this program, but they need to apply soon.

More information about the program will be presented at a soil health informational workshop at 5 p.m. on Sept. 9 at City Park in Pierpont, SD.