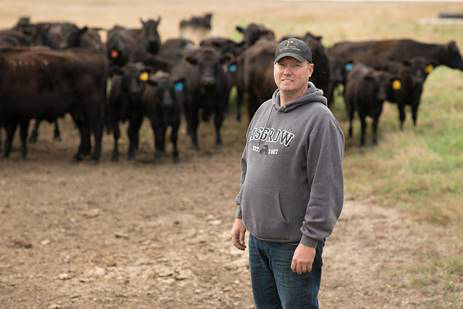 Frederick, SD, farmer Don Nickelson raises cattle and grows a variety of different crops under varying conditions. “Golfers say, ‘Play the course, don’t let the course play you,’” he said. “You got to look at how the

South Dakota is known for its variety, and Don Nickelson’s operation in Frederick is no exception.

With the help of his wife, Trista, and sons Aiden, Gavin, and Ian, Nickelson raises cattle and also grows corn, soybeans, oats, triticale and alfalfa in addition to some cover crops. His farm also varies in the amount of moisture it receives. His land to the west of U.S. Highway 281 tends to be drier and more suited for cattle while his land to the east receives more moisture.

How does Nickelson manage all this variety under such diverse conditions?

That kind of focused approach requires efficiency of labor, and Nickelson decided to achieve that when he returned home to the farm after college. It was just him and his stepfather working on the farm, and no-till practices seemed like they would require less work.

“It seemed like an easier avenue to go. You know, less tillage, less work,” Nickelson said. “So it started out as labor saving, and then I started seeing benefits to the soil and doing less work and still keeping up yield-wise with the neighbors.”

With this success, Nickelson started using modern technology to help him expand his focus on soil management. “I use a lot of precision stuff in my cash crops,” he said. “So I started using that to identify the poor-producing areas and then zeroing in on what those spots need and how to do it.”

Some of those spots have soils with high salinity.

“In our area there are a lot of potholes,” Nickelson said. “So with excessive water, ponding and ditch effect, saline areas start popping up and expanding if they aren’t cared for or treated differently than the rest of your crops.”

One of the ways Nickelson addresses those areas of concern is with the use of cattle and bale grazing.

Bale grazing involves setting hay bales out in a grid and giving cattle access to only a few bales at a time, concentrating cattle around those few bales. This strategy can reduce the labor needed to feed livestock, and the added nutrients from the cattle’s manure and leftover hay can improve the health of the soil.

“After doing it the first year, you get the cover, which I believe the cover helps eliminate some of that evaporation,” Nickelson said. “It keeps the soil moisture rather than drying out and bringing all those salts to the top and then wicking moisture from other areas and pulling up more salts. It’s part of the healing process.”

The Nickelsons also use rotational grazing to improve the health of their pastures.

By integrating crops and livestock and focusing on improving soil health, Nickelson said he has improved the resilience of his operation. “There’s challenges every year, and every year is a different challenge,” he said. “And what I’ve found in my soils, in building the organic matter and having better soil health, allows me to weather through whichever weather storm I’m faced with.”

Nickelson credits his stepfather for the mindset that encouraged him to implement these sustainable ag practices. “My stepfather gave me a lot of freedom that way, and that’s helped me going forward,” he said. “I remember him always telling me, ‘Do what you think is best.’ That’s what I hope to pass along to my sons.”