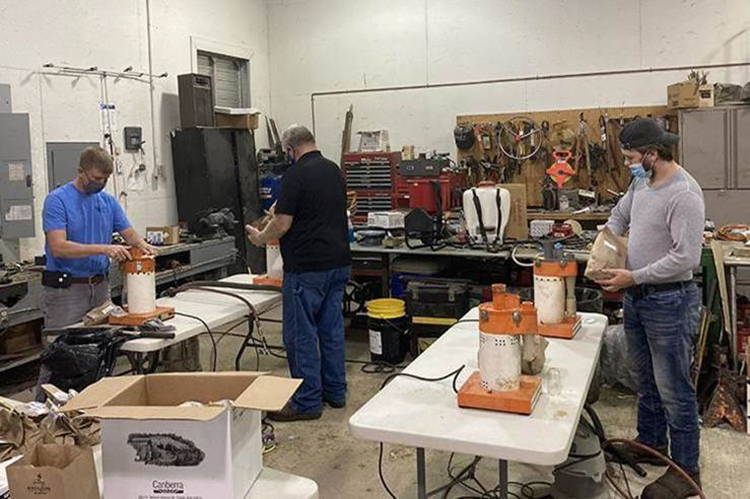 The contest, which is a free program of the University of Kentucky Cooperative Extension Service, allows producers in participating counties to submit hay samples to UK for testing each fall.

“The great thing about the hay contest is it gives producers a way to get a detailed forage quality test for their hay that includes the usual parameters like crude protein and total digestible nutrients and also high value parameters like fiber digestibility,” said Jimmy Henning, forage extension specialist in the UK College of Agriculture, Food and Environment who helps lead the annual contest with county extension agents.

The contest has grown dramatically in recent years. 2020 was a record-setting year for the number of entries submitted. Producers from 15 Eastern Kentucky counties submitted 624 samples for testing.

Chad Allen is a third-generation beef cattle producer in Perry County and has participated in the contest for the past decade.

“As producers, we need to take advantage of resources like the hay contest, especially when profit margins are tight. Otherwise, we are not putting ourselves in the best situation to be successful,” he said. “I’m seeing better weight gain on my calves through the winter, and the cows are holding their body condition scores better through the winter as a result of the balanced feed rations.”

Allen purchases his hay from another producer. He has used the contest results to improve both operations.

“Before the contest, I just bought hay and fed it,” he said. “Now, we are not flying blind. When I showed my hay producer the science and data from the contest, he got a soil test and applied fertilizer. I now know what I am paying for, and he knows the quality his hay needs to be to get the prices he wants.”

The hay contest began in 1993 when the Mountain Cattlemen’s Association and the Highland Cattlemen’s Association joined forces to try to improve their producers’ forage quality. At the time, producers across the region were seeing low weaning weights and nutritional deficiencies in their cattle. The cattlemen’s associations consulted UK extension agents and David Ditsch, UK professor emeritus who was then a forage specialist stationed at the UK Robinson Center for Appalachian Sustainability in Quicksand. The agents and Ditsch decided to make it a contest to entice producers to participate.

“At the time, we were concerned about the quality of hay our producers were feeding their animals, and we were seeing a lot of reclaimed mine land come back into production,” Harned said. “Because of this contest, producers in our area have taken steps to implement better soil fertility, better weed control and better variety selection.”

Extension agents, like Harned pull each hay sample, grind and package it for testing at UK’s Robinson Center. The samples then go to Chris Teustch, UK forage extension specialist, who tests each sample at his lab at the Grain and Forage Center of Excellence in Princeton.

“The real leaders of the East Kentucky Hay Contest are the extension agents,” Henning said. “They have been the driving force for the origination and the continuation of this annual event for more than two decades.”

While there are annual quality winners, a traveling trophy and bragging rights, Harned said most producers in his county are entering the contest for the education they get from the results and balanced feed rations.

Mike Dixon is a Boyd County beef cattle producer who has submitted samples for several years. He had the highest overall individual quality rating one year but enters the contest each year because it is a great educational process.

“I have learned how hay maturity and quality are linked,” he said. “Getting that first cutting of hay on time in the spring is critical to getting a high protein content. Having your feed ration balanced saves you money, because you are not overfeeding or underfeeding your animals.”

Charles May, Perry County agriculture and natural resources extension agent, has encouraged producers to submit entries to the program since it started. He said the forage production in his county has improved tremendously and has resulted in some producers expanding their production and diversifying their operations.

“I have people in my county growing alfalfa now, and a couple of producers that have started custom hay businesses and are using the results to market their hay,” he said. “People are really trying to cut their hay at the right time and are seeing the positive impacts of feeding their animals the proper ration.”