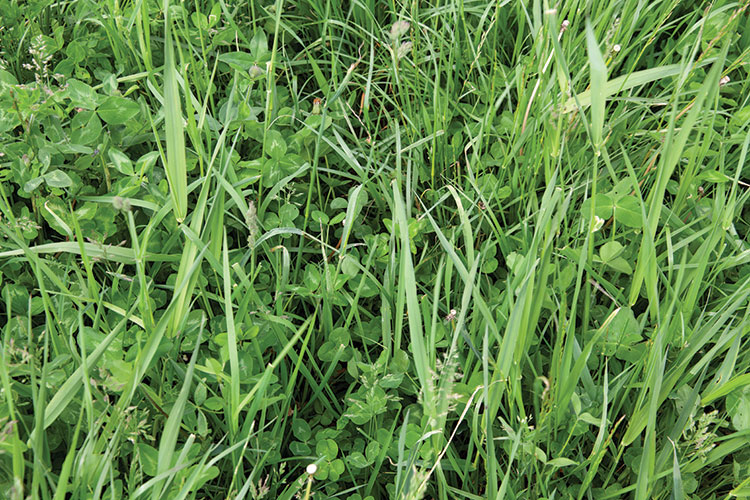 Many years ago, I heard the definition of an agronomist as being someone who never ceases to be amazed that nitrogen (N) makes grass grow. Throw a little N on a pasture, and it turns green and grows faster. Throw a lot of N on a pasture, and it gets darker green and grows even faster. Of course, there is a limit as to how dark the grass can get and how fast it can grow.

There is also an economic cost to every added pound of N on the farm. Nitrogen is the most transient element in the ecosystem. We may buy a hundred units of N fertilizer in the spring, but N is always subject to movement and loss from our pasture.

Microbial denitrification converts soil N into gases that escape into the atmosphere. Groundwater movement leaches N below the rooting profile. A cow eats grass, then urinates, and N leaves the urine puddle as ammonia. Our N investment vanishes quickly from the land. By the time fall rolls around, we generally have lost well over half of our spring N application.

Because of the transience of N, there is also an environmental cost as it leaves the pasture. This includes nitrates in groundwater, nitrous oxide and ammonia in the atmosphere, and algal blooms in surface ponds, lakes, and streams, resulting in fish kills.

Buying commercial N fertilizer is not a paying proposition for most livestock operations. It hasn’t been for most of the past 30 to 40 years due to the changing relationship between input costs and livestock value. The cost of fertilizer has risen at a much faster rate than the value that cattle or sheep have over the last half century.

Our pastures need nitrogen to grow and our livestock gain their protein from the N contained in pasture plants. If we don’t buy N fertilizer, where do we get that needed N?

The answer is very simple and has been right in front of us for centuries. Our primary source of N for pastures should come from the legumes growing in that pasture.

There are many producers in every part of the U.S. who rarely or never purchase N fertilizer. While some give up productivity because they do nothing to bring N into the pasture, there are others who rely on having a healthy legume component in their pastures and give up no productivity compared to N-fertilized grass pastures. As a bonus, individual animal performance is almost always higher on a grass-legume mix compared to a straight grass pasture.

Over the course of the 22 years we were on our farm in Missouri, there were three occasions on which we purchased N fertilizer. Those were for very specific reasons and it was applied to no more than 25% of our pasture acres. We relied on N fixation by the legumes in our pasture, even urine distribution through high stock density grazing, and building organic matter in the soil to provide N.

Our target is to have 30% to 50% of the pasture forage production come from legume growth. With this much legume production, we expect the equivalent of 100 to 150 units of N to be generated through N fixation annually. Because we are grazing livestock and not harvesting hay, most of that N is being returned to the soil through urine and dung.

It is our job to manage the pasture in such a way that a high percentage of the N is held in the soil and not lost to ammonia volatilization, leaching, and denitrification. If we can recycle that N multiple times, our overall productivity improves without additional expense.

Seed them and keep them

The challenge is getting legumes established into existing, grass-dominant pastures and then maintaining legumes over a long period of time. Fortunately, the small, dense nature of most legume seeds allows them to be broadcast seeded in many situations. Sometimes, a no-till drill is a more reliable option, but most of the common pasture legumes can be overseeded successfully.

Once established, most legumes can be maintained through natural reseeding. On our center pivot pastures here in Idaho, we broadcast seeded a mixture of red, white, and alsike clover in 2006 and have maintained those stands without reseeding through 2020. We do this by allowing a longer recovery period on roughly one-third of the pasture acres each year to allow seed to mature. To get enough seed production to maintain a stand, we need a 60- to 75-day recovery period.

We used a similar approach in Missouri in combination with our year-around grazing program. By stockpiling a third of the farm each year for winter grazing, we had built into the system the required recovery period for seed production. The combination of legume seed production ahead of winter grazing ensured new seedling establishment. It was a beautiful thing.

This article appeared in the April/May 2021 issue of Hay & Forage Grower on page 9.

Step up your game when allocating pasture Next