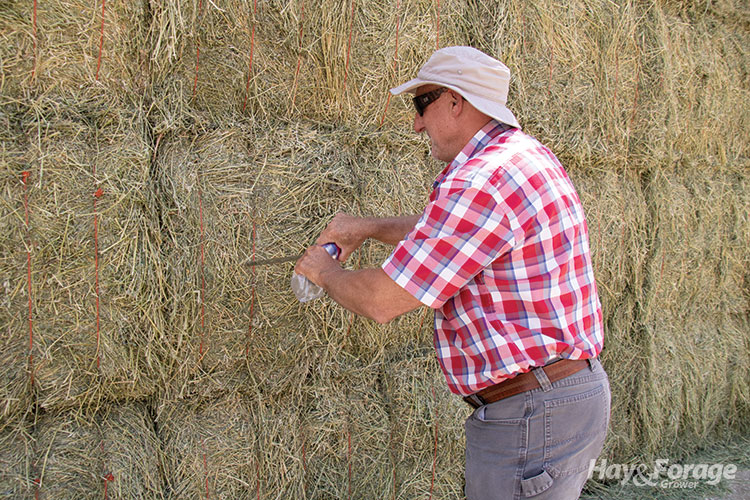 John Kaseroff receives phone calls from members when they have hay for sale. He travels to their farm to take inventory and collect hay samples before he markets it to buyers.

Hay producers in Nevada are professional gamblers, but they aren’t sitting at a Blackjack table. Instead, they sit in large and small square balers early in the morning, buying in to the little moisture dawn offers the dry climate. They place bets on how much water they have for irrigation, calculating what the mountains’ snowpack can provide. They can’t control what weather conditions they are dealt, but they can rely on skill and luck to see them through the growing season.

Making hay can be full of risks, but the Nevada Hay Growers Association (NHGA) was created so buying and selling hay doesn’t have to be. The association was established in 1970 in Yerington, Nev., when local farmers developed a marketing system that was more secure than selling hay direct-to-consumers. Producers protect themselves by relying on each other, guaranteeing they will be paid for their product. 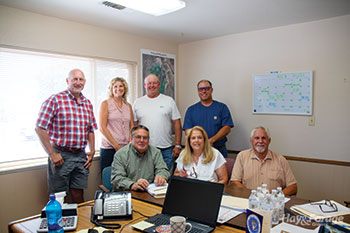 Getting in the game

To become a member, hay producers can apply for membership in the months of May and June. They must complete an application and pay a one-time membership fee. Members are responsible for all harvest procedures. Once their hay is baled and stacked, they notify Kaseroff that it is ready to be sold. Kaseroff takes inventory and samples of each stack and records the information in a spreadsheet to keep track of the hay’s quality and quantity.

NHGA has a wide customer base, and hay buyers also contact Kaseroff directly to make a purchase. The buyers lay their criteria on the table and Kaseroff connects them with the stack of hay that meets their needs. “I answer phone calls from buyers who want milk cow hay, dry cow hay, horse hay, or just feedlot hay,” Kaseroff said. “They tell me how many tons they want, and I come up with the product for them.”

Dairy producers are quick to buy hay from first and fourth cutting. This hay tends to have higher total digestible nutrients (TDN) and crude protein levels. Second and third cutting is higher in fiber because of growing in warmer temperatures, so Kaseroff tends to sell this hay to owners of other livestock that don’t require as high of quality as lactating dairy cows.

Alfalfa is the primary type of hay being marketed through NHGA. Even so, Evasovic noted that the association sells different kinds of products: grass, grass/alfalfa mix, grain, and organic hay. Different products become available as producers rotate their fields to other crops. “We sell alfalfa-grass mixes, straight grass, and cereals,” she said.

No matter what type of hay is for sale, Kaseroff must establish a price before a purchase can be made. He monitors markets and estimates the best deal for members and buyers alike.

When an offer has been extended and agreed upon – not often without negotiation – buyers are responsible for their own trucking and hauling. They weigh-in on the associations’ scale, pick up their purchase from the member’s farm, and return to the scale to complete the billing process.

NHGA doesn’t buy their members’ hay – they only sell it. However, they do purchase a small number of bales to stock their on-site, self-serve hay barn. It is designed for individuals who do not want or have the capacity to haul an entire truckload.

“We purchase hay as an association for local people who want to buy one or two bales,” Evasovic said. “They come to the scale, weigh-in, and load up however many bales they want. Then they pay us, and we pay the grower.”

In contrast to these local sales, the association also exports large quantities of hay overseas. Kaseroff noted their biggest international customers are China and Japan.

Like members, buyers must also be approved by the board of directors. After a credit application is reviewed, they are assigned a certain amount of credit that limits how much hay they can buy. If buyers exceed this limit on a purchase or cannot pay for another reason, members will still be paid in full.

The association utilizes a revolving fund to protect its members financially. Every time a member sells hay, they contribute 3% of their gross sales toward the fund. Each month, Evasovic sends growers payment for hay that was moved in the month prior, and if there are any unpaid expenses from a buyer, they will be covered with money from the revolving fund.

“It’s guaranteed money,” Borsini said. “Even if the person who has purchased the hay hasn’t paid for it, the grower will still receive his check on time. It’s kind of like an insurance policy.”

According to the association’s repayment schedule, members will be reimbursed a percentage of what they have invested into the fund every three years after all association expenses and/or losses have been accounted for.

Members are also protected when they sell hay in advance. Buyers who claim hay early in the season are sometimes required to contract their stacks and pay a deposit. For example, buyers can purchase first cut hay in May or June that they will not need until November or December.

“If buyers are going to take that long to move the hay, they have to pay deposits upfront, so the grower is not sitting on a stack that is not moving,” Evasovic explained.

Many buyers, especially dairies and feed stores, have secured their hay in advance during 2021 because drought-like conditions have shortened supplies.

Hay producers in Yerington and surrounding areas are used to low rainfall, only receiving 4.5 to 5 inches annually. They rely on water from the snowpack of the Sierra Nevada Mountains for flood and sprinkler irrigation, but in 2021, reservoirs were low.

Hay producers can obtain water rights, which give them access to a certain amount of acre feet of this snowpack water to irrigate their fields throughout the growing season. Under the circumstances, though, water is being rationed because not enough is available to meet everyone’s needs.

Over the past three years, 2018 to 2020, NHGA has marketed an average of 85,201 tons of hay annually. Evasovic expects tonnage to be reduced in 2021 because of the lack of precipitation. This will affect how much hay is sold, as well as how many people are selling it.

“Tons fluctuate over the years depending on the water members have, and this year we are going to be down quite a bit,” Evasovic shared. “We’ve got some growers who are going to have half a crop, and some who unfortunately won’t have any.”

In times like these, Evasovic and Kaseroff must get creative when it comes to meeting customers’ demands. Sometimes stacks must be split among buyers, and they will only receive a fraction of what they asked for.

Although compromises are sometimes made, it is important to the association that they have a wide customer base. NHGA accepts new buyers every year, which gives individual members the opportunity to sell more hay to more people.

“When you have multiple customers, you’re not relying on one person who might hit their credit limit and can’t take any more hay,” Evasovic pointed out. “You’re able to spread out your sales and get more hay moved.”

With that said, more people equal more phone calls, and Kaseroff is the one on the answering line. “I am probably dealing with 100 different personalities, trying to mix and match hay from the growers to the buyers, and keeping everyone happy is a tough job,” Kaseroff chuckled. “But it can be a benefit to the members because where else can you have that many people calling in, wanting to buy hay?”

Despite some shuffling and the occasional bad hand, NHGA is a reputable organization. They are dedicated to providing their members a fair game. For these producers, making hay can be a gamble, but selling it surely is not.

This article appeared in the November 2021 issue of Hay & Forage Grower on pages 26 and 27.