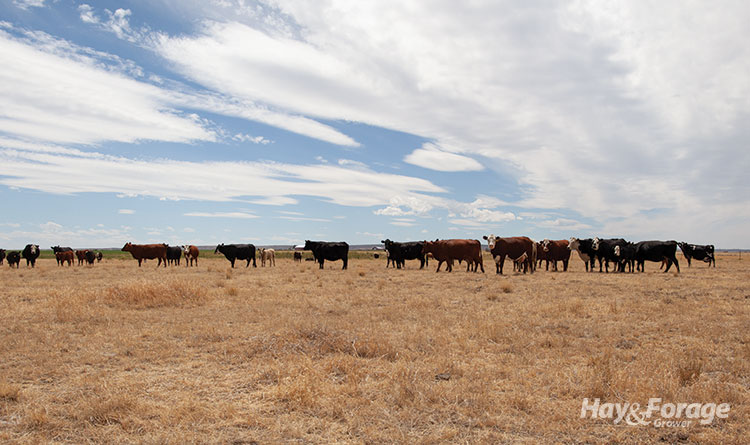 Feed conversion ratio (FCR or G:F) is the traditional measure of feed efficiency and feedlot performance. This trait is defined as the ratio between the animal’s gain and feed inputs. It’s highly correlated with growth rate, which is ideal for cattle entering feedlots; however, studies have shown that selecting cattle based on FCR also tends to boost mature cow size over time.

While FCR selection may work well for cattle in feedlots, it can create problems for cow-calf producers. Larger cows have higher maintenance energy requirements, which means greater feed costs and forage needs for those cows that may stay in the herd for many years.

Residual feed intake (RFI) is an alternative way to look at feed efficiency. It measures variations in feed intake beyond those needed for maintenance and production (for example, growth and lactation). Research has demonstrated that as much as 37% of feed efficiency differences between animals are due to variation in metabolism and protein turnover.

As an example, if we have two identical dry, open cows and measure the average of their daily voluntary forage intake over a week’s time, most likely these two animals will not eat the same amount of forage. Their intake could vary by as much as 10 or more pounds per day. If all other production traits are equal (same size, same body condition, same diet, and so forth), which cow would you rather have in your herd — the one eating only what she needs or the one eating an extra 10 pounds per day?

Residual feed intake is a way to measure these differences in intake independently of other traits like growth, production, and mature size. In growing cattle such as steers, we can account for average daily gain (ADG) in the equation to compare the intakes of steers that may have different rates of growth.

A measure of efficiency

When examining residual feed intake scores, it’s important to remember that cattle with a negative RFI are efficient animals; they consume less feed than expected based on their size and performance. Cattle with a positive RFI are inefficient animals because they consumed more feed than expected. If an animal has an RFI score of zero, it ate exactly the amount of feed expected based on its growth and other performance factors.

The calculations used to determine RFI make this trait independent of growth and mature size, and using it to select cattle will not inadvertently select for larger animals as selecting only on FCR will. It does result in improvements in FCR, and RFI is also moderately heritable. It’s becoming more common to see young bulls RFI-tested prior to large bull sales, and many breeds now include an expected progeny difference (EPD) for RFI. Look for an animal with a negative RFI. For example, -3.36 means that this animal should produce offspring that consume, on average, 3.36 pounds less than the breed average.

Since RFI has been determined to be moderately heritable, offspring of heifers selected for low RFI (more efficient) will also likely have improved efficiency in the feedlot and require less feed to reach finished size and weight than similarly performing peers. For the cow-calf producer, a cow that stays in the herd for eight years, consuming 5 pounds less forage per day than her peers, saves approximately 14,600 pounds of forage over her lifetime.

RFI does come with some caveats. A few studies have demonstrated that RFI may be negatively correlated with carcass marbling and leanness. More efficient animals may be leaner with less marbling than inefficient animals. This translates to lower carcass quality. Additionally, heifers that are more efficient (low RFI) may not begin cycling as early as heifers with high RFI scores, and pregnancy rates may be slightly lower in these animals.

These negative factors can be mitigated through careful heifer management. Select heifers born earlier in the season and monitor their growth carefully. Also, cull heavily based on pregnancy and calving rates.

Remember, too, that all selection tools have downsides, and selecting replacement animals based on a single trait is always inadvisable. Be aware of these potential pitfalls when selecting animals using RFI, but don’t be afraid to consider it along with other criteria such as genomic data and carcass EPDs.

Carefully manage and cull replacement heifers to avoid cultivating negative traits in your herd. Used appropriately, RFI is another tool to for reduce feed costs for the cow herd while improving overall beef production efficiency.

This article appeared in the November 2021 issue of Hay & Forage Grower on page 36.