By Sandya Kesoiu and Selena Burke

Kesoju (pictured) is the director for agriculture education, research, and development at Columbia Basin College in Pasco, Wash. Burke is a graduate student at the University of California-Riverside. 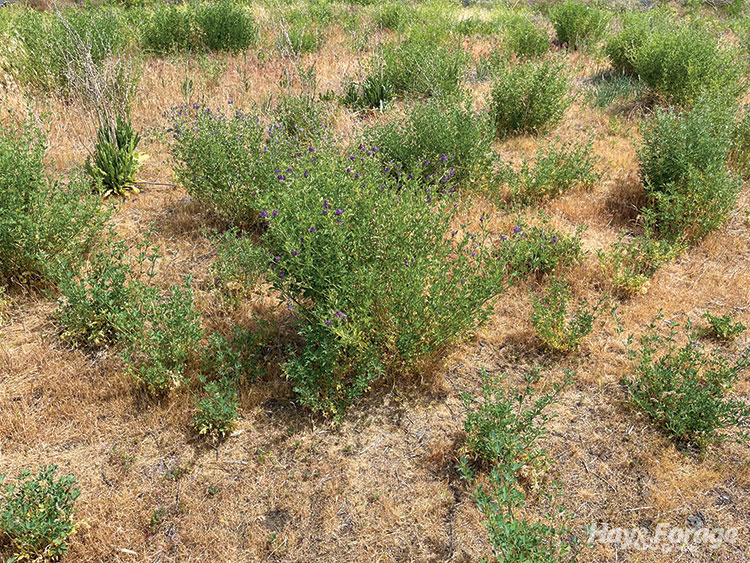 Decade ago, genetically modified (GM) alfalfa was commercialized. The occurrence of feral alfalfa populations along roadsides and in natural habitats is widely recognized. These populations can act as a reservoir for GM transgenes and aid in gene movement into the environment. Understanding gene flow from GM crops into neighboring fields is crucial since it can cause severe consequences if crop production is intended for markets with strict thresholds for gene detection.

The knowledge gained through the study of transgenes in free-living populations can assist companies and regulators in making more accurate predictions about the potentially detrimental effects of GM crops before release.

To understand the role that feral roadside alfalfa plants play in dispersing transgenes, our team surveyed feral alfalfa populations in Fresno County, Calif.; Canyon County, Idaho; and Walla Walla County, Wash., and found 32.7%, 8.3%, and 21.4% of the populations, respectively, contained the transgene in 2011 and 2012. Since our survey was conducted just after the second deregulation of Roundup Ready alfalfa, most of the transgene introgression probably occurred during the first deregulation.

In 2018 and 2019, Selena Burke, a master’s degree student at the University of California-Riverside, resurveyed the same regions to determine if feral alfalfa populations were perpetuating and if GM populations had changed compared to 2011 and 2012. Though feral populations were not found at all the previous sites, new sites were identified.

The results showed that 47%, 44%, and 41% of sites previously found to contain feral alfalfa still had these populations in Fresno, Canyon, and Walla Walla counties, respectively, suggesting that alfalfa populations were self-sustaining.

We found a significant rise in GM feral populations in 2019 compared to 2011 for all three regions. GM feral populations rose from 42% to 78.6%; 17.9% to 49%; 7.8% to 34.8% in Fresno, Canyon, and Walla Walla counties, respectively. In addition to locating new sites that tested positive, a portion of the higher frequency was due to previously negative sites now having plants with transgenes.

Gene flow is a common phenomenon in alfalfa because it is a cross-pollinated crop and depends on insects. To determine whether pollen-mediated gene flow has contributed to the surge in GM feral populations, seeds from negative plants (non-GM plants) at negative sites were tested. One out of 30 and four out of 24 negative plants tested positive for the GM transgene in Canyon and Walla Walla counties, which suggests that GM plants could spread transgenes into neighboring feral plants and potentially to neighboring conventional or organic fields. 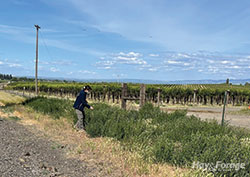 Selena Burke samples roadside alfalfa plants. The population of GM feral plants has risen dramatically in the past decade.
Data was collected on management practices adopted by growers to understand if any practices influenced feral populations. Tillage had a significant effect in containing the feral alfalfa population in Fresno County, while no such effect was observed in Canyon County. No management practice significantly increased the feral populations from 2011 to 2019 in all three regions.

In all three regions, the average plant number per population was significantly greater in 2019 when compared to 2011 and 2012. In Walla Walla County, GM presence was considerably greater when an alfalfa field was present nearby, but no such correlation was noticed in Fresno and Canyon counties.

Overall, these results suggest feral alfalfa populations perpetuate in roadside habitats. Though only 41% to 47% of sites had feral alfalfa in 2019, new sites were also found in some regions, suggesting feral populations are dispersing into the environment. If GM alfalfa acreage grows, the occurrence of GM feral populations will rise and undesirable consequences are possible.

All growers should be eradicating feral alfalfa along roadsides to warrant the coexistence of neighbors growing alfalfa for GM, non-GM, and GM-sensitive markets. Tillage and herbicide application are essential in managing feral alfalfa populations and minimizing transgene dispersal.

It’s mighty dry out West Next

First-cut alfalfa: try not to blow it Previous