Time for an alfalfa gut check 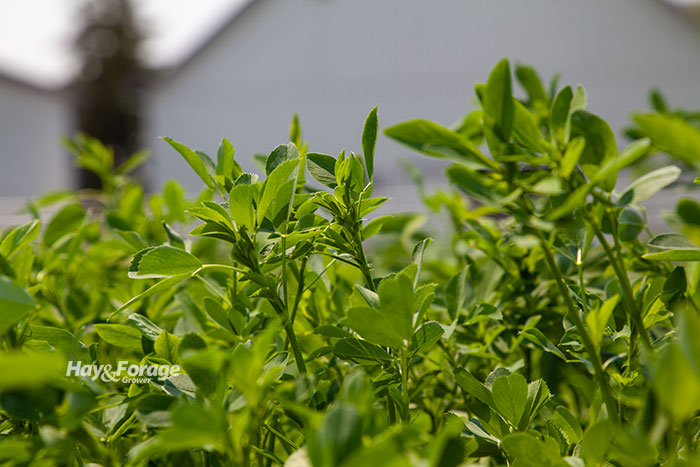 Let’s be honest: Alfalfa has taken somewhat of a hit over the past 20 years. It’s enough to break an alfalfa guy or girl’s heart.

Since 2005, there has been about a 30% drop off in harvested alfalfa acres for states that report both hay and haylage acres. Some states, such as California, have experienced a much larger drop (48%). It’s ironic that this is occurring when alfalfa’s value has never been higher.

The cause for the steady decline in alfalfa popularity can’t be pinned on one thing or entity. Lack of water in the West, larger dairy farms with a heavier reliance on corn silage, more profitable commodity alternatives that are supported by government programs, alfalfa’s inability to persist, and the recent interest to substitute annual forages for alfalfa have all been cited among the reasons for fewer alfalfa acres.

Needless to say, the declining alfalfa trendline has had a consequential impact on the supporting industry. There are now significantly fewer seed marketers and plant breeding programs, and judging from the current alfalfa rumor mill, the numbers will soon decline even further.

In 2002, the USDA reported that there were 3.2 million new acres of alfalfa seeded in the U.S. That number dropped to a little over 1.6 million acres in 2021. It’s not difficult to understand why breeding programs and alfalfa seed brands have consolidated or succumbed to winterkill during the past two decades.

To be sure, the few remaining alfalfa breeding programs are staffed with highly skilled individuals. Of course, there are not that many alfalfa cultivar breeding jobs to be had. This all means that there will continue to be less competition and brand choices for the alfalfa producer.

Alfalfa’s status at many universities has also diminished. Alfalfa extension specialists and researchers are becoming endangered species. Public alfalfa variety testing in most states is nonexistent. Our ability to attract and train new, young talent in alfalfa science has been severely compromised. Yes, there are exceptions, but the examples are becoming fewer and farther between with each passing year.

It's not all bad news

Although the trendline for alfalfa is undeniable, there are also reasons for optimism and may be even more justification why things could or should change.

Perhaps part of alfalfa’s problem is simply familiarity and the fact we have taken it and its benefits for granted. Alfalfa still remains the dominant perennial forage crop in many regions of the United States. Drive down any road, and if you spot a green field, the chances are good that you’re looking at alfalfa. As we are often reminded, alfalfa ranks as the third or fourth most valuable crop grown in the U.S., only behind corn, soybean, and sometimes wheat.

Corn silage as a prominent feature in dairy rations is not going away. Yield and energy rule the day; plus, marketers get to sell seed every year. Fortunately, alfalfa makes a perfect complement for the annual crop. This was recently confirmed in some Miner Institute research that found alfalfa included in the dairy ration at 30% to 50% of the forage fed optimized overall cow performance.

Do we know if annual crops such as sorghum species or “cocktail” mixes as a substitute for alfalfa are here to stay?

I think the book is still out on that question. Unlike alfalfa, these crops need to be seeded every year. One knock on alfalfa is that it isn’t always consistent from a performance and forage quality perspective. Annual forages bring both of those factors to an even greater level of concern. Further, most annual forages do not bring the amount of protein to the diet that alfalfa often does.

Alfalfa’s agronomic and environmental benefits have always been undervalued and underappreciated. Perhaps the recent run of high fertilizer prices might bring greater attention to the legume’s ability to supply nitrogen. Currently, the value of the nitrogen supplied per acre by a terminated alfalfa crop is, in most cases, equal to or greater than the cost originally invested in top-end alfalfa seed.

Most of the alfalfa grown in the U.S. is found in the Western states. There’s no question that water availability is limiting this production and will continue to do so in the future. The same can be said for other crops. Further, water availability is regional. There are many Western alfalfa-growing regions where adequate water still rules the day.

Although the level of alfalfa feeding on Western dairies has been on the decline, alfalfa hay exports to China remain extremely strong. It’s difficult to imagine that this market won’t continue to be served even if there is a shift in where the crop is grown. Unfortunately, China still remains a GMO-free market.

In the Southeast U.S., alfalfa is finding a role as the comeback player. After years as a no-show, both researchers and producers are finding that alfalfa offers a good complement when seeded into warm-season perennial grass fields. In the Southeast, it appears that alfalfa acres are on the rise.

There’s no question that the alfalfa industry’s infrastructure has been downsized. That trend will continue, at least in the short-run. Even so, let’s not make the mistake of putting alfalfa into the minor crop category just yet. It still generates billions of dollars of net revenues for growers while keeping tons of soil from eroding every year. Alfalfa also helps to sequester carbon in the soil.

There are alfalfa problems — both plant and industry — that need to be fixed, but it’s still a long, long way from being down for the count.