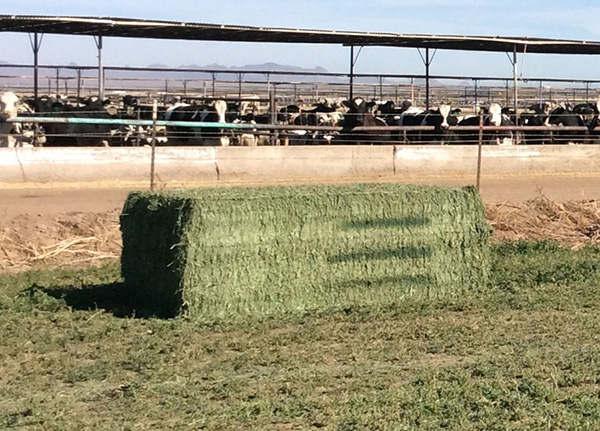 Three stripes indicates this bale exceeds 180 RFV
Hay producers and cattle feeders now can visually identify the relative feed value (RFV) of every alfalfa hay bale. A new feature of Harvest Tec’s RFV Calculator is a bale-marking device that applies food grade dye striping to the side of the bale as it is being made. The striping identifies the level of RFV quality of the hay in that specific bale.

Harvest Tec recently introduced its RFV Calculator system, currently available from all large square baler brands. This “first of its kind” technology accurately determines the RFV of each bale, and enters that value into its record keeping software. Best of all, it can assign the value to each bale either with optional tagging equipment or with the dye striping. These colored stripes indicate a certain range of RFV. For example, three stripes identify alfalfa bales that exceed 180 RFV, two stripes for bales 160 to 180 RFV, one stripe for bales 140 to 160 RFV, and no stripes for bales under 140 RFV.

The RFV Calculator system has been tested at locations across the country and found to be as accurate as the historical core sampling process. In many cases, it is more accurate than the traditional lab analysis method because it measures the value of the entire bale rather than the value of a single core taken from just one part of the bale.

Harvest Tec is once again bringing precision technology to the hay making industry. By sorting alfalfa bales according to their relative feed value, dairy producers can more accurately determine the proper ration for high producing cows, dry cows or heifers. In a recent study conducted by Utah State University under the guidance of Dr. Allen Young, he determined that cows would produce four pounds more milk per head per day by feeding sorted hay compared to feeding the same hay taken randomly out of a mixed stack. For hay sellers, this technology helps them establish a fair price based on their hay’s actual quality.

To calculate each bale’s RFV, Harvest Tec’s system uses a precise moisture monitor, on-board computer and the baler’s scale kit. To establish a base value, a field sample is sent to a lab when the field is cut. The lab’s value is entered into the system’s computer and the Harvest Tec software measures the RFV as the baler operates.