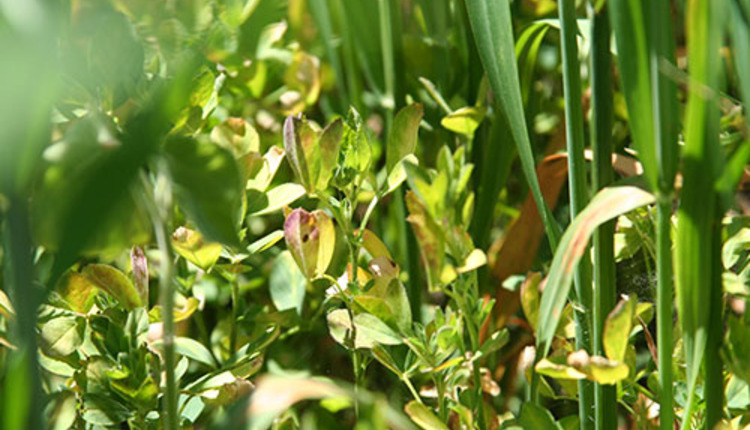 With June comes the onslaught of university blog posts and media releases warning alfalfa growers of the impending arrival of potato leafhoppers. This is done with good reason. In many alfalfa-growing states, the potato leafhopper has the distinction of being its number one alfalfa pest in terms of economic loss.

The potato leafhopper is sneaky, not announcing its arrival in any visible manner; in fact, the leafhopper is barely visible itself. There is no plant chewing, no noise, no growing degree unit development charts — they just ride in on storm fronts like hitchhikers in the cargo bay of a Boeing 747.

In my experience of monitoring alfalfa fields and talking to entomologists, there are four axioms that every alfalfa producer can take to heart:

1. Potato leafhoppers will arrive every year, though numbers will vary.

3. If populations are high, alfalfa yield will be cut significantly, especially on already stressed stands.

4. Potato leafhoppers suck — in more ways than one.

Most agronomists and alfalfa growers are familiar with the potato leafhopper's weapon of choice — a dagger-like stylet that is inserted into the alfalfa stem or leaf. Once inserted, the sucking of sap (carbohydrates) out of the plant begins.

Research has determined that saliva from the leafhopper causes phloem tissue (the plant's pipeline for moving carbohydrates from the leaves to the roots) to compress and restrict flow within the tubes. It's thought that stem feeding, and the subsequent build-up of leaf sugars because of phloem tissue closure, is actually more responsible for the symptomatic leaf yellowing (sometimes referred to as hopperburn) than the leaf feeding itself. The only method to determine if fields are infested with threshold levels of potato leafhoppers is to use a sweep net. Once leaf yellowing is visible, the damage has already been done.

Another observation from tromping around alfalfa fields over the years: Counting leafhoppers captured in a sweep net is an acquired skill that takes some practice. For this reason, many growers leave this task to a paid professional or forego the process all together; to be sure, herding cats is child's play compared to herding leafhoppers out of a net and keeping count at the same time. Where the sweep net approach is tossed aside, often growers either spray without first determining population density or no effort for control is made at all. Though the former is in clear violation of IPM principles, the latter is a recipe for disaster. I've secretly found it easier to sympathize with the IPM violators.

The amount of yield loss suffered by a leafhopper infestation depends largely on the level of infestation (how many) and when the little guys moved into the stand. Most economic threshold charts provided by state extension entomologists differentiate treatment thresholds by plant height and perhaps treatment cost. Sometimes hay value is also considered. Often glandular-haired alfalfa is given a higher threshold level.

There are many reasons that make potato leafhoppers a difficult pest to scout for and manage. There is one major reason to do something — significant yield loss that is not often apparent unless a direct comparison is made within a field. One of the pieces of secondary information coming from all the alfalfa fungicide trials (often with an insecticide treatment) that have been done in the past few years is that the control of potato leafhoppers pays big dividends.

As we move through the remainder of the summer, develop a management plan to monitor potato leafhoppers. There's simply too much economic downside in lost yield and stand persistence if you don't.