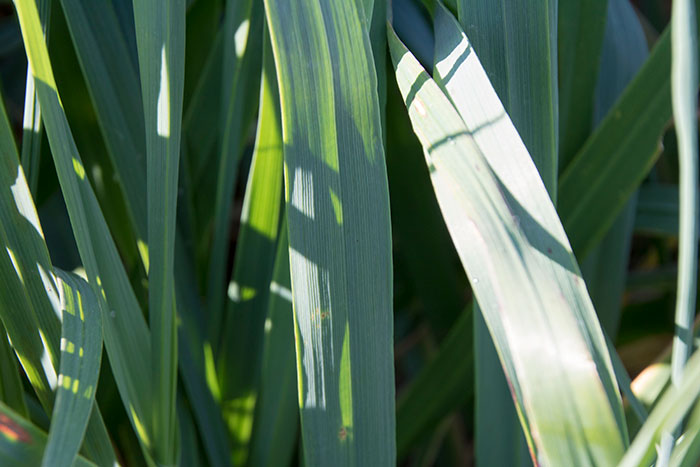 Planning is especially vital for fall forage production. While yield may be higher if planted early, dry weather and pest pressure are limiting factors. The contrary is true for late fall planting.

Fayetteville’s test plot was a tilled, prepared seedbed. Although planted in dry soil, a heavy rain occurred the day after planting. The remainder of the fall was generally hot and dry.

As expected, the yields of early-planted Fayetteville forages were affected by disease and weeds. August-planted wheat had significant leaf rust. With the exception of wheat and ryegrass, dry matter (DM) yields for August plantings were over the recommended 1,200 pounds per acre needed for fall grazing. Rye, triticale, winter oat, rape, and spring oat yields ranged from 1,386 to 3,740 pounds of dry matter per acre (Figure 1), with August-planted spring oat yielding the highest. All species planted in October were below the 1,200 pounds per-acre threshold.

The test plot in Hope was no-till planted on a fallow site after weeds and vegetation were sprayed and mowed. Heavy August rain made for wet soil at planting that quickly turned hot and dry due to a lack of moisture through late November. In September, temperatures surpassed 90°F for 17 days.

Hope’s August-planted yields were also affected by a combination of drought, disease, and weed pressure. Wheat and rye experienced significant leaf rust, while broadleaf weeds infiltrated all species ranging from 35 to nearly 80 percent. Conversely, the October-planted forages did not face much weed or disease pressure. Harvested dry matter yields were below the recommended 1,200 pounds per-acre level for all forages in both plantings (Figure 2).

While dry weather, disease, and weed pressure are common risks with early planting, the researchers noted that disease and weed pressure in both locations for the August planting were unusual. Typically, early-planted winter annuals have good yield potential. On the other hand, October-planted forages yielded low at both locations, despite having few problems with drought, weeds, and disease.

To plan for fall grazing but to hedge against risk of poor fall conditions, the researchers recommended planting selected acreage early and then planting any remaining acreage at traditional later dates for winter/spring grazing. 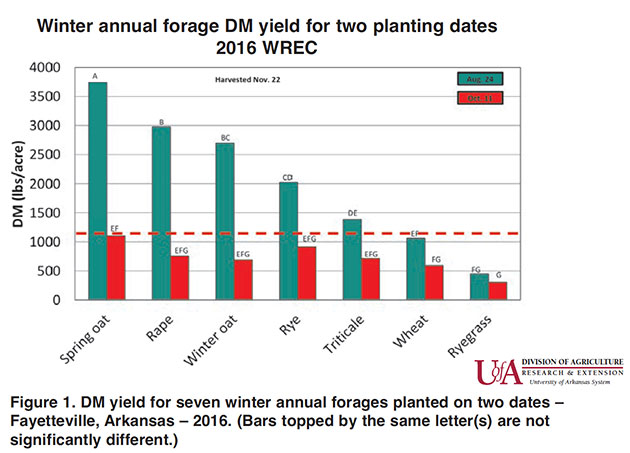 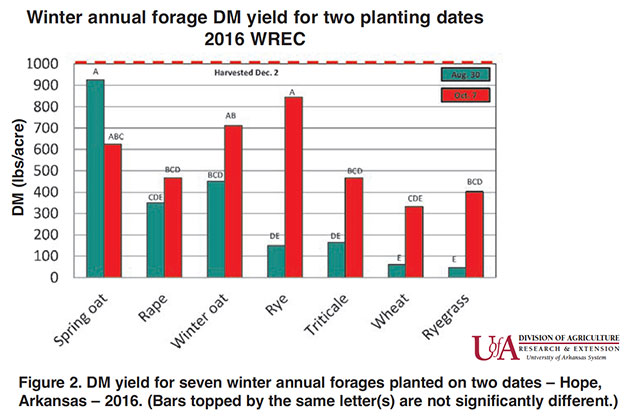