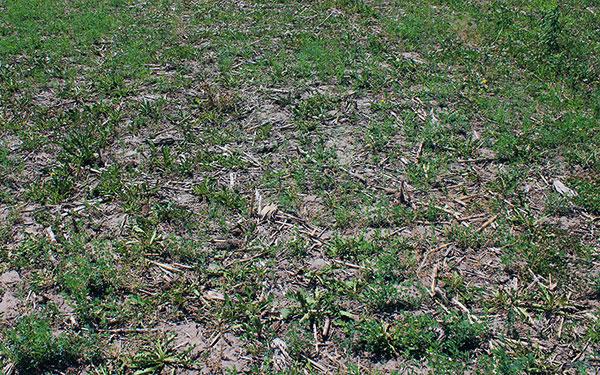 Perhaps nothing in the forage production cycle is more aggravating, disheartening, disappointing, or sometimes frightening than a new forage seeding that just never develops. At worst, it means an entire establishment year lost, not to mention the time and investment in inputs such as seed, fertilizer, and herbicide.

It’s about this time of year across the northern half of the U.S. that hope for a turnaround begins to wane . . . but not so fast, my friend.

Just about every farmer at some point in time experiences a failed seeding. I’ve walked hundreds of these fields in my lifetime, dishing out tissues as the producer and I walked across the field trying to determine if last rites were the appropriate next step. Then, of course, the discussion turns to “Why?”

In 2016, failed seedings have been above normal in some regions. “Poor establishment of spring seeding alfalfa has been widely reported across Pennsylvania and New York,” says Marvin Hall, professor of forage management at Penn State University. “The alfalfa germinated and emerged but then just seemed to stop growing.”

Hall notes that in some cases there were 6-week-old alfalfa plants that were still in the unifoliate leaf stage. “When the temperatures got warm, some of the plants grew out of it but others just aren’t as thrifty as we would expect,” he explains in a recent issue of Penn State’s Field Crop News.

The Upper Midwest also had some establishment issues this spring. In last week’s eHay Weekly “Forage Road Trip” report, extension forage specialist Dan Undersander indicated that some of the Wisconsin spring alfalfa seedings resulted in poor stands. Like Penn State’s Hall, Undersander attributes the thin or unthrifty stands, at least in part, to the unseasonably cold temperatures that occurred after seedling emergence.

Undersander explains, “There are several factors at play. The cool temperatures that slowed growth allowed more time for seedling diseases to thin stands. We have also had some cases of allelopathy where alfalfa was seeded into fall-planted winter rye and situations where herbicide carryover issues existed. For both of these scenarios, cold soil temperatures may have delayed the breakdown of toxic compounds in the soil.”

Hall notes that the similar factors that he’s diagnosed for the poorly established stands were the early cold conditions during establishment and some late frost. “Fields that were planted later avoided these conditions and established fine,” he adds.

Perhaps last rites can be determined now. Perhaps not. The risk of hot, dry weather as we dig deeper into summer makes forage establishment a much riskier deal. I’ve seen some pretty sorry looking stands come to life in late summer or even the next spring. Don’t be too quick to judge.

Hall emphasizes the need for weed control. To give plants a fighting chance, they need sunlight and adequate moisture. In cases where the alfalfa is too short to apply an herbicide, you may just have to chop the weeds off, as Hall notes they had to do in some of their university research plots.

From now until late summer, continue to monitor these marginal stands. “If you have 15 plants per square foot at the end of July, then there should be sufficient plants to justify keeping the stand,” explains Hall. “If you’re below that level, replanting in August or early September remains an option because autotoxicity is generally not a problem following a spring seeding of the same year.”

Often, it may be a situation where only portions of the field need replanting. This can be done by doing a minimum of surface tillage to these areas and reseeding; using a good no-till drill is also an option. Recall that for any late summer seeding it is critical to have a firm, packed seedbed to ensure good seed to soil contact.

The forage nutrient Next

Save the leaves for quality alfalfa Previous