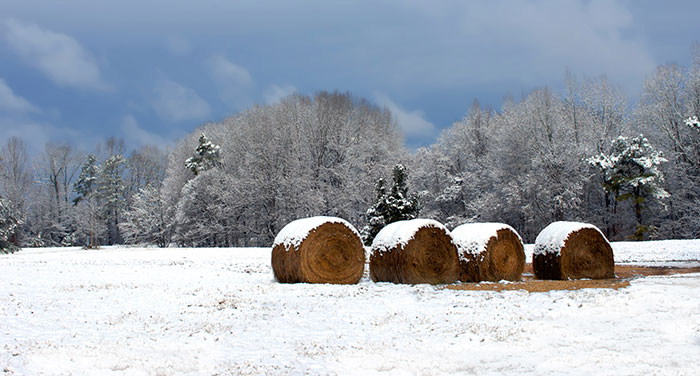 With the holidays in the rearview mirror, the last vestige of a distraction to the routine of feeding cows during winter has come and gone. Now it’s snow, ice, sleet, rain, mud, cold, and wind . . . for some, all; for others, a select few.

Through these dog days of winter, the cold seems colder and the wet seems wetter. Worse yet, fixing a frozen waterer while wearing gloves is impossible.

It’s sometimes easy to overlook what’s really going on with the cows and their feed when icicles dangle from your ear lobes or mud relentlessly reaches from the depths to grab the boots off your feet. Winter chores are a survival game, but don’t lose sight of what’s going on during the hay-feeding ritual.

Waste not, want not

Though some feeding systems such as bale grazing are inherently going to result in more waste, if your end game is to make the most efficient use of stored hay reserves as possible, how hay is fed makes a big difference.

“Large bale feeding systems are designed to minimize labor but not waste,” says Steve Tonn, extension educator for the University of Nebraska-Lincoln based in Blair.

In a recent edition of UNL’s BeefWatch, Tonn cites research from Nebraska and Michigan State that demonstrates the impact of hay-feeder type on the amount of feed loss. As with other studies, the tapered cone feeder often results in the least amount of hay waste (less than 5 percent). The next best option is a ring feeder with a bottom skirt.

Tonn suggests that long, rectangular feeders are less effective at reducing hay waste compared to round or square feeders because boss animals can more easily push others away from the feeder.

Bale density also makes a difference. Research at the University of Arkansas showed hay loss was four to five times less in a tapered cone feeder when dense alfalfa-grass hay was fed compared to some less dense oat hay. In this comparison, feed quality may also have been a contributing factor to greater feed loss for the oat hay; livestock will eat more and waste less of high-quality hay compared to low-quality hay, regardless of feeding method.

Feeding frequency also impacts feed loss. During these dog days of winter, it might be tempting to put out enough hay for multiple days.

“Daily feeding will force cattle to eat hay they might otherwise refuse, overconsume, trample, and waste,” Tonn says. “Cattle waste less hay when the amount fed is limited to what is needed each day. Twenty-five percent more hay is needed when a four-day supply is fed with free access,” he adds.

One of the tasks associated with bale feeding is the removal of the bale-binding material, be it net wrap, plastic twine, or sisal twine. But what if you don’t get it all and the cattle consume it?

During winter, the binding type of choice often freezes to the bale, making removal a more difficult task . . . especially when your eyelids are frozen to your pupils.

In a study conducted at North Dakota State University, where plenty of expertise exists on anything frozen, researchers examined the digestibility of three types of net wrap, biodegradable twine, and sisal twine.

Using Holstein steers, they cut the binding materials into 2-millimeter lengths, placed them in Dacron bags, and put them in an animal’s rumen for 14 days. Seventy percent of the sisal twine was digested within the two-week period, but virtually none of the net wrap or biodegradable twine had disappeared based on measured weight in and weight out.

The lesson gained from the research is that the removal of all binding material is the safe play, regardless of weather. Net wrap and twine have been known to build up in the rumen over time and cause digestive issues. Though net wrap has been shown to be superior from a bale storage perspective compared to twine, it also must be removed before feeding or grinding.

“Testing forages lets you determine their best and most economical use in the ration,” Tonn says. Working from an accurate forage test, hay can be matched to livestock needs based on the type of animals being fed. It also enables for the most efficient purchase and use of supplements.

Body condition is more difficult to maintain in winter because additional nutrients are directed toward animal maintenance. Winter hay feeding becomes an exercise in matching livestock to hay quality and closely monitoring performance and body condition, even if from the front seat of the pickup while your body parts thaw.

That’s a wrap Next