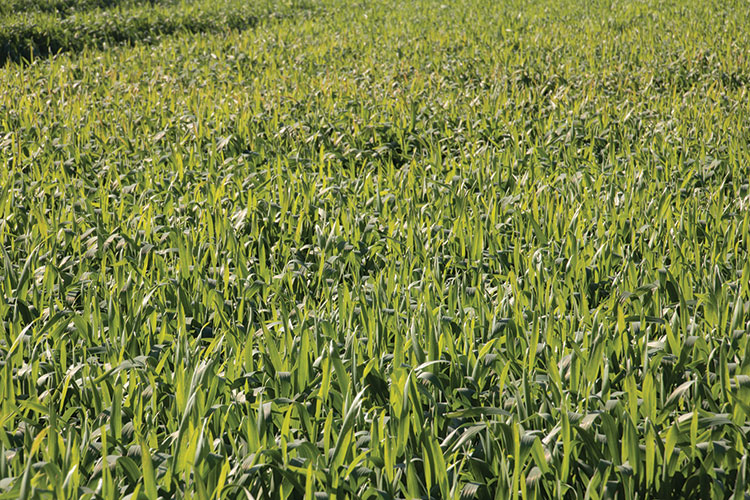 Agricultural income in the southern Great Plains mostly comes from livestock farming and forage production. Small grains are excellent sources of quality forages and are primarily grown for annual cool-season pastures in the region. The Samuel Roberts Noble Foundation established its small grains breeding program in the early 1950s with the objective of developing improved cultivars for forage rye. During the late 1980s, wheat, oat, and triticale were added to the program.

Small grains breeding programs at most universities and research centers primarily focus on grain production. However, the main objective of the Noble Foundation’s small grains research is to develop forage-type and/or dual-purpose cultivars that can be used for both forage and grain. The target traits include better fall season and overall forage yields, good recovery after grazing, and improved forage qualities. The goal was to provide fall and winter forages to benefit livestock production in the Great Plains and southeastern Southern Plains.

The first cultivar released was Elbon (“Noble” spelled backwards) rye, in 1956. Elbon is still a popular rye cultivar grown across the United States, from Oklahoma to Florida. Over the past few decades, several other rye cultivars, such as Bonel (1965), Maton (1975), Oklon (1993), and Bates (1994), have been released from the program.

Recently, two other forage-type rye cultivars were released: Bates RS4 (NF307), commercialized through Athens Seed Co., and Maton II (NF306), commercialized through Oklahoma Genetics Inc. Both cultivars produced significantly higher fall-winter forage than the previous Maton cultivar. More than half of the total forages of these new cultivars are produced during the early growing season, from November to February. Bates RS4 originated from the Bates cultivar. Maton II was developed from a single cross between Polish-3 and Maton.

Heavy Grazer II (NF401) is a facultative, winter-type forage oat developed in our program and released in 2012. The cultivar showed superior fall and spring pasture and forage production in Oklahoma, Texas, and Louisiana trials. East Texas Seed Company is the commercial partner for marketing seeds of Heavy Grazer II.

In 2013, NF402 was released as the second oat cultivar from our program. In seven years of testing in southern Oklahoma, NF402 produced more fall and total forage than most commonly grown oat cultivars. In southern Oklahoma and northern Texas, NF402 showed complete or partial senescence during winter months but exhibited excellent recovery during spring. Both NF402 and Heavy Grazer II have better freezing tolerance than many other oat cultivars developed for the southern United States. Oklahoma Genetics Inc. is the commercial partner for marketing NF402 oat.

NF101 and NF201 are the first forage-type wheat and triticale cultivars developed in the program and released in 2013 and 2014, respectively. The main advantage of these cultivars is their early fall-winter forage production potential. These cultivars have semi-erect growth habits and mature early. Morphological and agronomic attributes include taller growth habit with bigger leaves and thicker stems.

Both of these cultivars produced more total forage when compared to the commonly grown check cultivars in the region. Early fall-winter forage is the main advantage, and more than half its total yield is produced during the early growing season. Both cultivars are well adapted to southern Oklahoma, northern and eastern Texas, and throughout the southeastern United States. The cultivars are intended for use in annual fall through winter grazing systems. Oklahoma Genetics Inc. is the commercial partner for marketing these cultivars.

Currently, the Noble Foundation Agricultural Division is conducting demonstration trials in the southern Oklahoma and northern Texas regions to show the potential advantages of growing these small grains cultivars.

Our small grains breeding program has expanded its activities in various aspects. The program has collected more germplasm of small grains, such as triticale and oat, to screen for crossing parents with traits of interests. For example, the program screened hundreds of oat cultivars for better winterhardiness because oats often encounter winterkill in this region. In addition, our program is establishing a molecular breeding platform to facilitate cultivar selection by providing genetic profiles of many traits, such as resistance to various races of leaf rust, strip rust, stem rust, and so forth.

This article appeared in the November 2016 issue of Hay & Forage Grower on page 28.