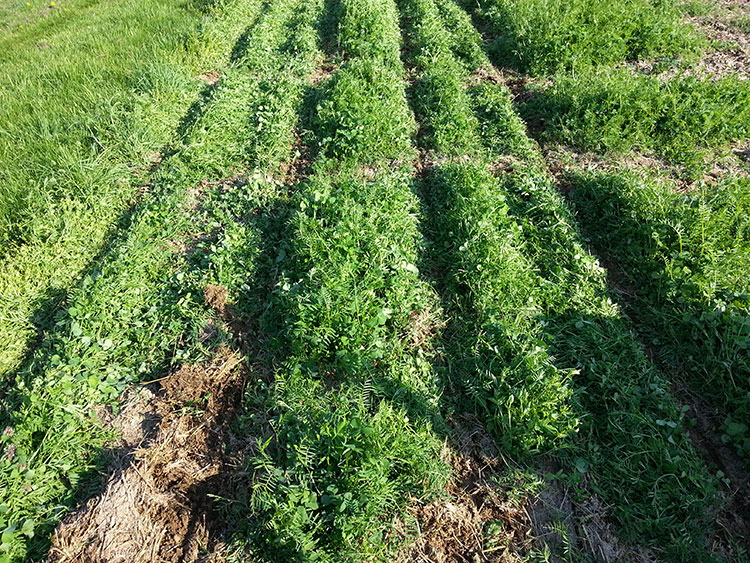 Even a short time without living roots in the soil can impact your farm ecosystem. If you practice no-till religiously, this is one of your founding principles. Although at King’s we generally don’t preach no-till orthodoxy, we do believe in maximizing time with living roots growing in soil. You may have heard of beneficial fungal organisms like mychorrhizae that form symbiotic relationships with plant roots. In the end, the fungal hyphae greatly expand their hosts’ ability to reach water and nutrients. To thrive and get the nutrients they need, though, they require access to living roots almost continuously. The living root system also exhudes labile organic compounds that feed a multitude of soil organisms. To accomplish all this, many no-tillers “plant green” – establish a cash crop into a living cover crop before spraying to kill it or just after using a roller-crimper to mechanically kill and flatten it. As a result, the lifecycles of the two crops overlap.

Keeping a live root zone to support soil life and health is just the beginning. Unlike a dead residue mat, a living crop doesn’t foster and transmit soil borne disease effectively. It also doesn’t harbor pests like slugs that look to the emerging seedling as its only food source – although slugs will often be drawn into the dying cover crop to feed, rather than the new emerging crop. Plus, by planting more species, you encourage more beneficial slug predators, such as the ground beetle. The overlap of the two growing crops creates a window of biodiversity, and each increase in biodiversity raises the system’s defenses.

We did this in our Lancaster County, PA corn research plots last spring, planting the corn no-till into a growing cover crop of hairy vetch and crimson clover. Manure was spread before planting green. The May 4 date was good for the planting timeline of the corn, but the legumes were at pre-bloom stage, about 12 inches high. The hairy vetch was not yet long and viney enough to tangle with the corn planter, but we did sacrifice a good amount of nitrogen that would have been fixed if we had waited a few more weeks. We learned that we had to consider both the physical challenges to planting and the growing degree days lost or gained for corn at different planting dates. Planting green often involves a direct tradeoff between the growth of the cover crop and the growth period of the main crop, and you will find that you have to manage more closely to maximize the main crop.