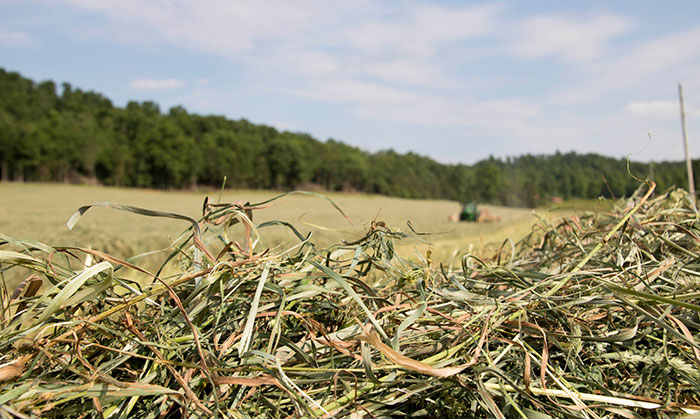 Mixtures of grass and alfalfa have always been variable by nature in terms of their composition. This variability is caused by environmental conditions at the time of seeding, the grass species selected, and seasonal growth differences from spring through fall.

Given the variability, it would seem beneficial to know the ratio of alfalfa and grass being harvested from specific fields. This would help explain nutritional differences. It might also be added information when buying or selling forage.

Up until recently, the only means to measure the grass component of an alfalfa-grass mixture was by visual analysis, which is highly subjective. Some NIRS (Near Infrared Reflectance Spectroscopy) models have been tried but with little precision success.

Now, at least for the northeastern U.S., there is a new tool.

Jerry Cherney, extension forage specialist at Cornell University, has developed an NIRS calibration equation that can be successfully used to estimate the grass component of a forage sample. Research results were reported in the September-October 2016 issue of Crop Science. Dairy One laboratory (Ithaca, N.Y.) cooperated in the project and now offers the NIR test for a $5 fee.

The research was done by collecting a number of alfalfa-grass samples from farm fields and research plots over a three-year period. The samples were then hand-separated, dried, ground, and recombined into various predetermined percentages of alfalfa-grass mixtures.

After scanning the samples, Cherney was able to determine which spectral wavelengths best correlated to the known mixture samples. Both dried and ensiled samples were tested.

The researchers then validated their model by collecting 98 field samples, separating the grass, then recombining the samples into random, known mixtures. These samples were successfully predicted using three different NIR instruments at Dairy One, which indicates the NIR equation model could be successfully used at other forage laboratories.

Currently, forage samples from the Midwest are being tested to see if the model will work beyond the Northeast.