Got milk? You bet he does 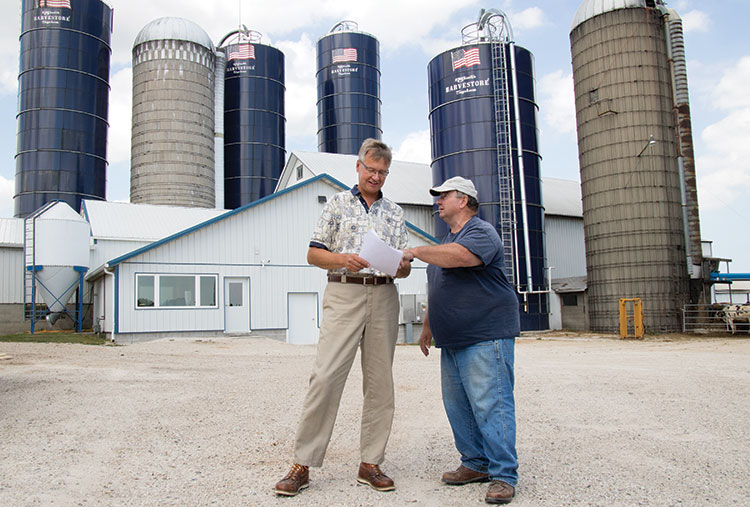 Once you meet Tom Kestell, you won’t forget him. Ask him a question and the amiable 68-year-old is quick to share his lifetime of knowledge and opinions about Holstein cows and forage production.

You’ve probably seen pictures of a few of Kestell’s Holstein cows, most recently Ever-Green-View My Gold-ET. It was My Gold-ET that set a new single-lactation milk production record with a final 365-day tally of 77,480 pounds of milk, 1,992 pounds of fat, and 2,055 pounds of protein.

The Kestell farm, located in Waldo, Wis., is home to about 90 Holstein cows that tout a herd average of nearly 45,000 pounds of milk. Nobody on earth gets more milk out of cows. When I visited the farm, the herd was averaging 136 pounds of milk per cow per day.

In many respects, Kestell does it by bucking a lot of trends. There are no large freestall barns, bunker silos, or milking parlors. The cows are housed in an older but well-kept tie stall barn, and most forages are stored in upright silos of various ages.

Kestell, who farms with his wife, Gin, along with one of his sons, Chris, and his wife, Jennifer, was 15 credits short of a political science degree when he pulled up stakes at the University of Wisconsin-Stevens Point and headed back to the home farm. He basically started from scratch by buying 30 cows and some machinery from his mother. That was 1971, and he’s never looked back.

“You get milk with great genetics and great forages,” Kestell affirmed. He likes to talk about both. There’s no doubt the cow genetics are top-notch — his animals are sought and purchased by people from around the world. It was the forage program that I was interested in investigating; after all, he had to be doing something right or at least different to keep his cows milking at such an extraordinary level.

Depending on forage quality, about 55 to 60 percent of the milking cow ration is comprised of a near even split (dry matter basis) of alfalfa and corn silage. “We haven’t moved to an extreme corn silage ration like many dairies,” Kestell said. “I still like alfalfa; besides, how long can you sustain continuous corn silage on a field?” he questioned.

The farm has about 250 acres of alfalfa. “We strive to get 8 tons of dry matter yield on four to five cuttings,” said Kestell, who is a past winner of the World Forage Analysis Superbowl that is held in conjunction with World Dairy Expo at Madison, Wis., each year. “Our very best fields, those free of weeds, harvested on time, and without being rained on, are designated for the milking cows and stored separately in two 20- by 80-feet upright silos,” he explained. “I hate getting alfalfa rained on, and rarely do we let it happen.”

Kestell strives to cut alfalfa at a 26-inch height for the milking herd. For heifers and dry cows, he utilizes a mixture of corn stalks and alfalfa, while also feeding grass baleage.

For the milking herd, alfalfa is cut about every 25 days. Kestell explained that he uses the “fingertip test” to monitor when his fields are ready to cut. “I walk out in the field, put my arm to my side, and when the alfalfa touches the tip of my finger, it’s about 26 inches tall. That’s when we like to cut,” Kestell said. “This works for anyone, regardless of how tall you are,” he added. Kestell’s first cutting from last year was coming out of the silo with a 190 relative forage quality (RFQ). His harvest target moisture is 50 percent.

Alfalfa is generally seeded in late summer, though sometimes spring seedings are made with an oat-pea or barley-pea companion crop. The companion crop is then harvested for heifer feed. Kestell plants 18 pounds of seed per acre. Fields are prepared with a Great Plains Turbo-Till vertical tillage implement, which Kestell likes because it leaves a firmer seedbed. He then plants with a Brillion seeder that further firms the soil for maximum seed-to-soil contact.

Dairyland Seed’s Hybriforce 3400 alfalfa is currently Kestell’s variety of choice. “It does really well for us, and I haven’t been able to find a variety that matches its performance on our farm,” he said.

Kestell is vigilant in keeping potato leafhoppers at bay. “We don’t spray every field every year, but if they become a problem, we spray,” said the past Wisconsin Forage Pacesetter Award winner. “You really have to watch the new seedings, that’s where leafhoppers can do the most damage,” Kestell added. Soil fertility is also a priority at Ever-Green-View Farms. Based on soil tests, dry and liquid fertilizers, along with manure, are used to keep alfalfa production at a high level. He often applies liquid manure the year before seeding.

Corn silage also plays an important role for Kestell’s cows to reach their genetic milk potential. The 80 acres of corn silage average about 30 wet tons per acre. About two-thirds of the acres are planted to brown midrib (BMR) hybrids, which enhance fiber digestibility.

Unlike the alfalfa, which is harvested by the farm, corn silage is custom chopped each fall. The custom operator uses a shredlage processor. “You don’t find any kernels,” Kestell noted.

In 2016, Kestell raised the cutting height of his corn silage to 30 inches. “This boosted the starch level from 28 to 41 percent and allowed us to drop our high-moisture corn from 20 to 11 pounds per cow per day,” he related.

Always looking for ways to improve, and per the recommendation of his long-time dairy nutritionist, Steve Woodford, Kestell recently had an additional upright silo constructed so that he could carryover more corn silage and let it fully ferment before feeding. As such, fresh corn silage never has to be fed, and the feed reaches its full nutrient potential before being placed in front of the high-producing cows.

“Tom has good, consistent forage,” Woodford said. “We don’t have to vary the dairy ration a lot, which is important when cows are consuming 64 pounds of dry matter each day like these cows are.”

High milk production, or any type of production for that matter, isn’t a matter of luck. In addition to the 90 lactating cows, Kestell also cares for about 300 head of young stock, dry cows, and bulls. Feeding forages to these groups is not just an afterthought for the dairyman — they don’t just get whatever is left over. No, Kestell has a plan, and that’s where some unique forage blending and baleage comes into play. About 1,200 bales are in-line wrapped as baleage each year.

For dry cows and older heifers, Kestell wraps about 400 bales of cornstalks following high-moisture corn harvest in the fall. These bales are saved until spring; then after alfalfa is cut and placed into windrows, Kestell uses a bale shredder to deposit the cornstalks along and on top of each windrow. The combined 17 percent protein material is then chopped and stored in a designated silo to be fed to dry cows and pregnant heifers. 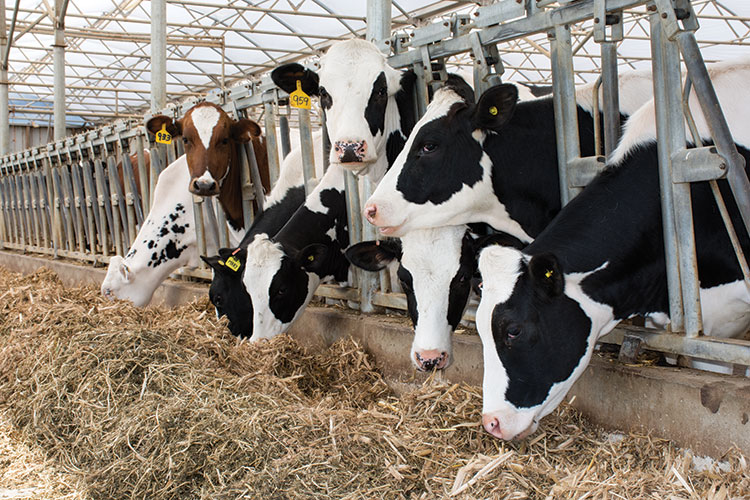 In addition to the alfalfa-cornstalk mix, Kestell also has a dedicated field of various cool-season grasses that is harvested as baleage and also fed to dry cows and older heifers. Often, one cutting of the grass is also made into dry small square bales. These, too, are utilized for dry cows and heifers as needed.

Kestell’s higher quality alfalfa baleage, which is harvested between 45 to 60 percent moisture, is fed in the lactating cow ration at a rate of about 4 pounds per day. He also utilizes this feed as a forage source for the younger, growing heifers.

Milk production like that of Kestell’s doesn’t happen by accident, and the already sage dairyman never stops trying to improve and learn. Superior cow genetics have set a high mark for milk production potential; matching forage needs throughout the animal’s lifetime have brought that potential to a reality. “The whole system matters,” Kestell concluded.

It works for them Next