Your corn silage is changing 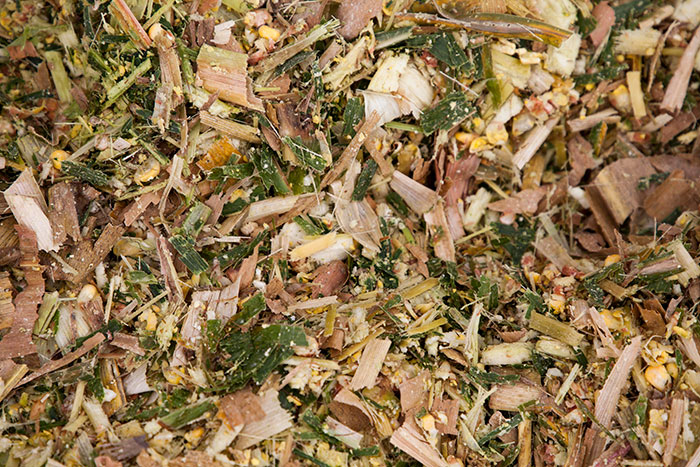 Many dairy cow rations rely heavily on corn silage. The versatile feed staple combines both fiber and grain into an excellent source of nutrients and energy.

A recent Iowa State University Dairy News & Views newsletter notes that where fiber tends to break down slowly in the rumen, starch is more readily fermentable. The degree of starch digestion hinges on the breakdown of the kernel’s protective layer, or pericarp.

“When a dairy cow consumes corn kernels that are properly fragmented, the microbes in its rumen ferment the starch and release energy that can then be used for biological processes, including milk synthesis,” states Carrie Shouse, Iowa State University animal scientist.

Starch content is determined by the number of kernels and degree of maturity. This value is a constant as it remains the same from harvest through fermentation and feedout, Shouse adds. That said, starch does become more digestible over time during fermentation.

“This is because starch is arranged in granules surrounded by proteins that degrade over time under the acidic conditions of silage fermentation,” Shouse says.

As shown in the graph, starch becomes more accessible for microbial fermentation in the rumen at around six to eight months of ensiling. Shouse cites in vitro studies that show almost 20 percent more ruminal starch digestibility after eight months of fermentation – or, more energy for both microbes and the cow. This comes with a downside, explains Shouse, because while it generally raises feed quality, too much starch being degraded can also depress fiber digestibility and milkfat synthesis. Producers are urged to test corn silage after six to eight months for in vitro starch digestibility. From there, Shouse recommends working with a nutritionist to rebalance diets and account for the added starch digestibility.

“This can translate into better rumen health and even economic savings by using feedstuffs more efficiently,” Shouse says.