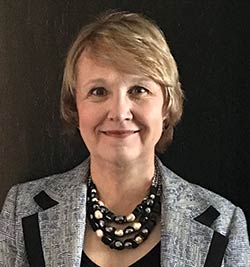 Beth Nelson
HFG: How did your career lead you to direct and represent agricultural organizations, which include the National Alfalfa & Forage Alliance (NAFA) and the Midwest Forage Association?

BN: I don’t have an agricultural background — my closest tie to agriculture was visiting my dad’s cousin’s swine farm in Iowa every summer. When I graduated with my business degree, I was hired as a bookkeeper for the Minnesota Egg Council and after a few months was promoted to executive director. While I didn’t have an agricultural background, I fell in love with the industry and the terrific people involved — farmers, industry reps, and researchers alike. In 1986, I started Beth Nelson & Associates Inc., which specializes in agricultural association management. We now work with alfalfa and forages, canola, poultry, and wild rice.

BN: We have five full-time and two part-time staff members, each of whom have various responsibilities; however, when it’s crunch time, we all chip in to get things done. We do our best to be like ducks — appearing calm and unruffled on the surface but paddling like crazy underneath.

HFG: In your experience, what are the key elements to the success of an agricultural organization?

BN: I think it all boils down to serving the members of the organization and being responsive to needs and goals. If the organization isn’t benefiting the farmer in some way, it will fail. I wasn’t raised on a farm, nor did I ever think I’d be an executive responsible for managing agricultural organizations. But I listen to the people I serve, educate myself on the issues that are important to them, and then go out and do my very best to serve as their advocate.

HFG: What components of the forage industry comprise NAFA, and what is the organization’s mission?

BN: The National Alfalfa & Forage Alliance is actually an umbrella organization of state and regional alfalfa seed and hay associations, genetic suppliers, seed marketers, and allied industry members. The organization is “dedicated to promoting the interests of the nation’s alfalfa, alfalfa seed, and forage producers through education, research, promotion, and advocacy.” Our primary focus is issue advocacy and policy development/implementation in any area affecting the alfalfa seed and forage industry. We work on issues such as public research funding, farm policy, agricultural coexistence, crop insurance, and environmental regulation, just to name a few.

NAFA also offers educational activities. For example, each year we host the highly popular Alfalfa Intensive Training Seminar (AITS) that features some of the nation’s foremost experts in the field of alfalfa production and management. We’ve also hosted a biofuels summit, which looked at the potential role for alfalfa in the production of cellulosic ethanol. A coexistence meeting was also offered to create a strategy for harmony among producers of genetically engineered, conventional, and organic alfalfa.

HFG: The DC Fly-In has been a staple NAFA-sponsored event for a number of years. How important has it been to have a “forage voice” in Washington?

When we began our DC Fly-In, I can’t tell how many times we heard a congressional staffer say something like, “Forage? I thought you said 4-H. What’s forage?” or “We’ve never heard from the alfalfa industry before.” Congressional offices knew almost nothing about the nation’s fourth most valuable field crop. Now, after having established relationships with key congressional offices, the industry’s voice is finally being heard.

HFG: Also in the fledgling stages has been the recent initiation of the U.S. Alfalfa Farmer Research Initiative (often called the Alfalfa Checkoff Program). What prompted the need for this program, and was it difficult to get “buy-in” from the industry?

BN: Even with the creation of the AFRP, public research at the federal level for forages is very small compared to allocations to the “Big 5” (corn, soybeans, wheat, rice, and cotton). This particularly ruffles my feathers — alfalfa and forages (all hay) have more total value than three of these other crops, and alfalfa alone is bigger than rice and cotton. The Alfalfa Checkoff Program supports the industry by providing additional funding for research in areas farmers deem a priority. Additionally, it demonstrates to congressional offices that alfalfa farmers have some “skin in the game” and are not just asking for a handout without investing in research themselves.

We currently have an online survey asking farmers to help identify priorities for the second call for checkoff proposals. Visit alfalfa.org and give us your input. Our website also has the list of participating alfalfa seed brands supporting the new alfalfa checkoff. Most major brands are now facilitating the collection of the $1 per bag checkoff and 100 percent of the funds support public research.

HFG: Creating a workable forage crop insurance program has been another goal of NAFA. What is currently being done to reach this goal? What have been the hurdles?

One of the biggest hurdles in this process has been developing an accurate and acceptable method for placing a fair “market” value on alfalfa. Alfalfa is not traded on exchanges like other commodities, which makes it more difficult to value. Prices need to be gleaned from other sources such as contract pricing or prices received at local hay auctions. There can be significant discrepancies in those numbers, so we need to come up with an acceptable method to value alfalfa that often never leaves the farm.

HFG: What do you view as the major challenges ahead for the forage industry?

BN: Even though the process is moving forward, developing an insurance program alfalfa farmers can rely on is still a major challenge. However, the biggest one for me is parity with other major crops in public research. We’re making progress, but we’ve got a ways to go. While the AFRP is addressing some of our industry’s biggest research needs, the future of any federal research program is tenuous at best. We need to make sure lawmakers continue to understand the challenges the industry faces and how public policy and research investments can significantly impact one of the most sustainable crops on the American landscape.

This article appeared in the January 2018 issue of Hay & Forage Grower on page 16.